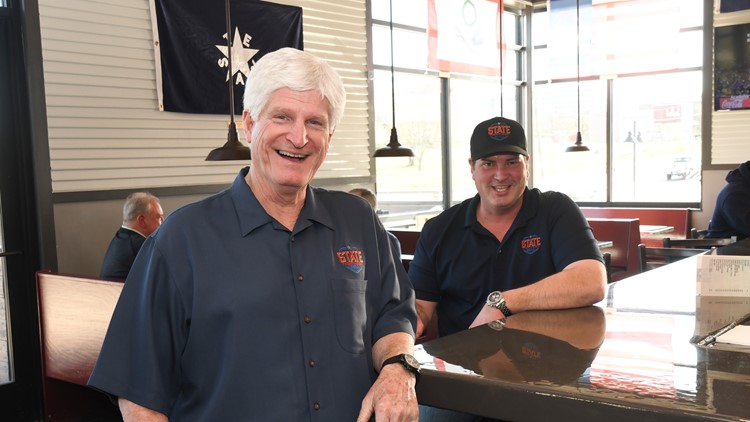 Photo by: Jake Dean / Dallas Business Journal
Pat and Mike Snuffer have opened State 28 Grill, a restaurant that honors Texas' entry into the union as the 28th state with its name and aesthetic.

Veteran Dallas restaurateur Pat Snuffer is back in the dining scene with his son at his side once again.

Pat and Mike Snuffer have opened State 28 Grill, a restaurant that honors Texas' entry into the union as the 28th state with its name and aesthetic.

Pat is best known as the founder of the Dallas restaurant chain Snuffer’s. After about 35 years in business, Snuffer’s filed for Chapter 11 bankruptcy in 2013, and later that year, Local Favorite Restaurants, formerly known as Firebird Restaurant Group, purchased the chain's debt and took over operations. The Snuffers opened their latest venture on Feb. 4, moving past a legal settlement and the closure of another fresh concept about four years ago.

RELATED: The top 50 restaurants in Dallas

State 28 Grill, which is located near Dallas Love Field Airport at 2427 W. Mockingbird Ln., is the father-and-son duo's second restaurant together, and patrons can see the two working together in the kitchen.

"It's one of the most fantastic things if one is fortunate enough to have someone that close, somebody that committed and somebody that professional," Pat said. "It's extremely rewarding."

The Snuffers have designed a menu that takes influences from East Texas, Houston, and New Orleans cuisine. Among the burgers and po'boys are Pat's iconic cheddar fries—twice-fried potatoes smothered in cheese with options for jalapeños, onions, chili or bacon.

With his history in the kitchen and industry, Pat said it was only a matter of time before he opened another restaurant.

When it was time for Pat to make his move, he partnered with CEO and Chairman of Richardson-based Golden Tree Restaurants LLC, Mark Parmerlee, whose company partially owns State 28 Grill with the Snuffers.

"We have their support operationally (and) administratively," Pat said. "It makes it a whole lot easier to run the restaurant when you know you got the support of Mark's team."

Golden Tree works in the background providing State 28 Grill financial, HR and administrative support, allowing Pat and Mike to serve as the face of the brand.

"My view of this, as with other operating partners, is it's Pat's restaurant," Parmerlee said. “I'll always remind him in the end that it is really his call."

Pat’s years in the restaurant business are a value-add to the brand, helping them address what he and Parmerlee call one of the biggest challenges — people.

"It's a challenge to present oneself in a restaurant as more attractive to an employee base than a restaurant that has been around for 10 years," Pat said. "We open something new, a one-off like this, it's a leap of faith for many of the employees."

Some of Pat’s employees don’t mind taking the risk because they’ve worked with him for decades.

"It takes a complete and total commitment and … I'm fortunate because I've got some folks, besides Mike, that I can rely on to not only implement the decisions, but help make the decision," Pat said.

Between nearly half a century of experience and multiple concepts, Pat said he knows having the right people can make or break a restaurant.

"It's not an easy thing to open a restaurant … but you got to have that love for it and that commitment," Pat said. "I have that. Mike has that. Mark has that. And we're just ready to go for the future here."