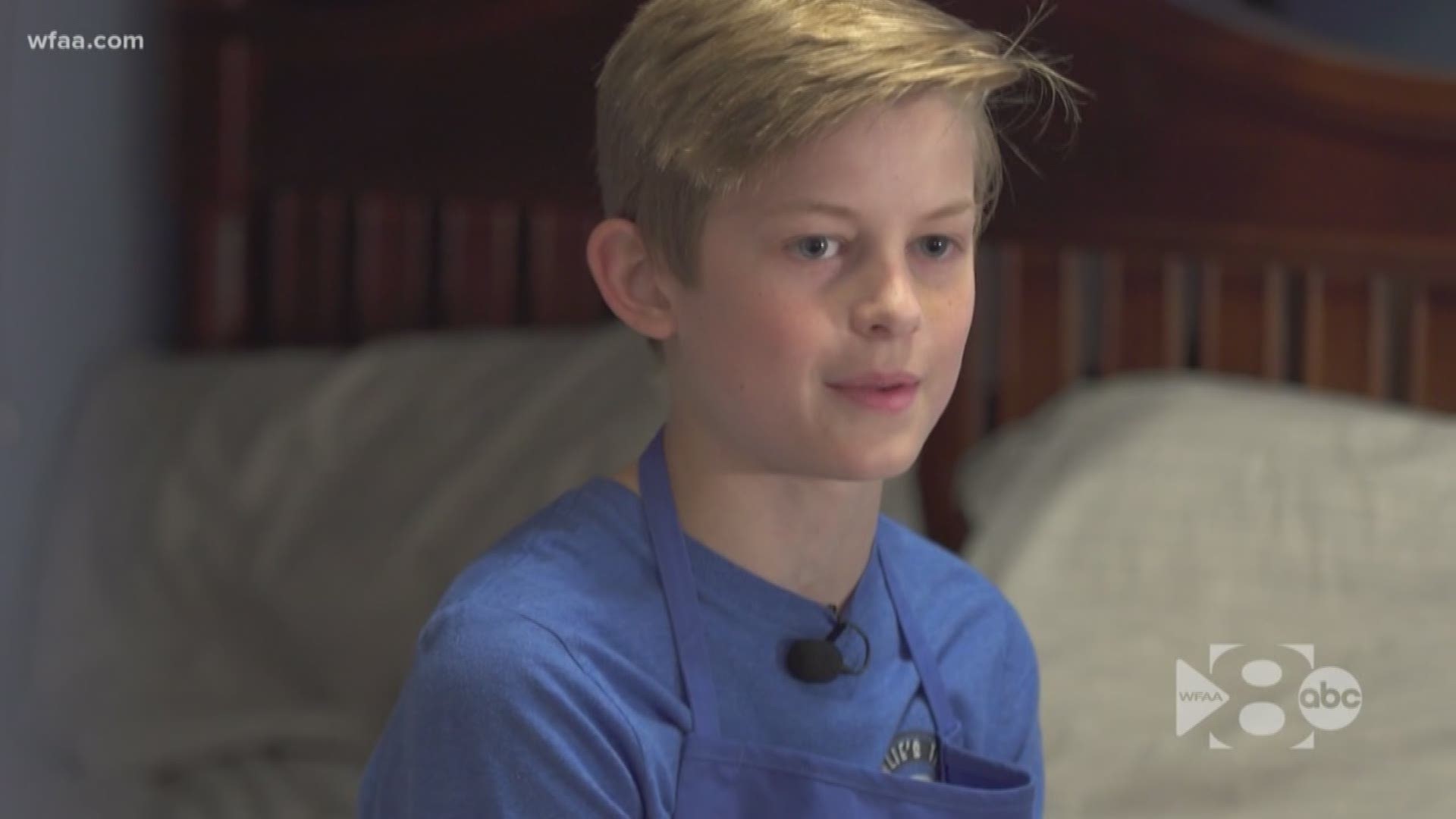 “I kind of feel bad when I have to ask people for money because I have a bunch of stuff I like to buy,” said Charlie Kobdish, 11.

He is one kid you don’t want to underestimate.

About 18 months ago, Charlie sat his parents down.

“I told them, ‘Hey I want to start a business,’” he recalled.

“We kind of laughed and said ‘Oh, that’s cute,’ because he’s always coming up with new inventions or businesses,” Sonia said.

Charlie, who likes to cook, among other things, came up with his own recipe for spiced pecans.

“He said his grand opening is November 25,” Sonia recalled. “Here’s some samples and we tasted them, and we thought, ‘They are actually kind of good.’”

He calls them Charlie’s Treats.

A year and a half ago, he cut the red ribbon across the doorway into his bedroom and went to work.

“I know it’s kind of hard when people say ‘Oh, it's a kid’s business. Okay.’ But now that he knows his family supports him and all his friends say ‘Charlie, you’re doing great,’ it helps a lot with him,” said Emme Kobdish, Charlie's older sister.

Emme, mom, and dad make up his production line in the kitchen, filling and then carefully weighing each bag. In all, they have bagged and he has sold more than 1,000 bags of spiced pecans. Thanksgiving and Christmas are the busiest time for him.

This isn’t just a kid’s project. Charlie’s Treats is a Limited Liability Corporation in Texas and pays taxes to the state.

So, how much money is he making?

“I haven’t made a ton of money. It’s not like a legitimate salary,” Charlie explained, “but I have made enough to cancel all of my chores.”

“Sometimes he doesn’t have to,” his sister Emme countered, “but we’re like, ‘Please unload the dishwasher’ and he’s like ‘Oh, okay.’”

“Yeah, I kind of rolled my eyes a little bit on that one. He still does his chores,” said Chuck Kobdish, Charlie’s dad.

“He has to feed the dogs,” Sonia added.

“And he has to unload the dishwasher,” Chuck added with a smile.

Still, the 11-year-old admits splurging on a tablet computer, and he has an infatuation with fountain pens.

That’s all fine, his dad said, as long as Charlie lives by one rule.

No one keeps count of how many child entrepreneurs start businesses like Charlie every year. But another young man dug even deeper a few years ago and discovered kids who run businesses often have a common thread.

“It’s a book by a kid for kids. So, it’s meant to be very readable,” said author Dallas Crilley.

Crilley wrote Kidpreneur when he was 14 and said the most successful kid businesses always start with a strong network of support.

“One of the things I know a lot of adults struggle with, they’re not using their circle around them to get the push they need to get off the ground,” Crilley said.

“If you start a business, don’t expect it to be super booming right when you start. But if you do it well enough, it will definitely really boom,” Charlie added.

Charlie still plays baseball, basketball and is a Boy Scout. He also auditioned for Shark Tank and now has friends asking him for a job.

He gives five percent of profits to charity and is already planning his future.

“I have a couple of ideas. I thought I could be a lawyer and then a senator,” Charlie told WFAA.

Spiced nuts might not pay for college, but they are teaching this 11-year-old life lessons he doesn’t get in school.

RELATED: How to spot hidden cameras in hotels, vacation rentals