DFW Airport contributed more than 32,000 tons of waste to landfills every year. Now it's turning passengers’ food into fertilizer to help bring change

After discovering about a quarter of the waste generated in DFW’s terminals is food, workers at airport restaurants are being trained to compost. 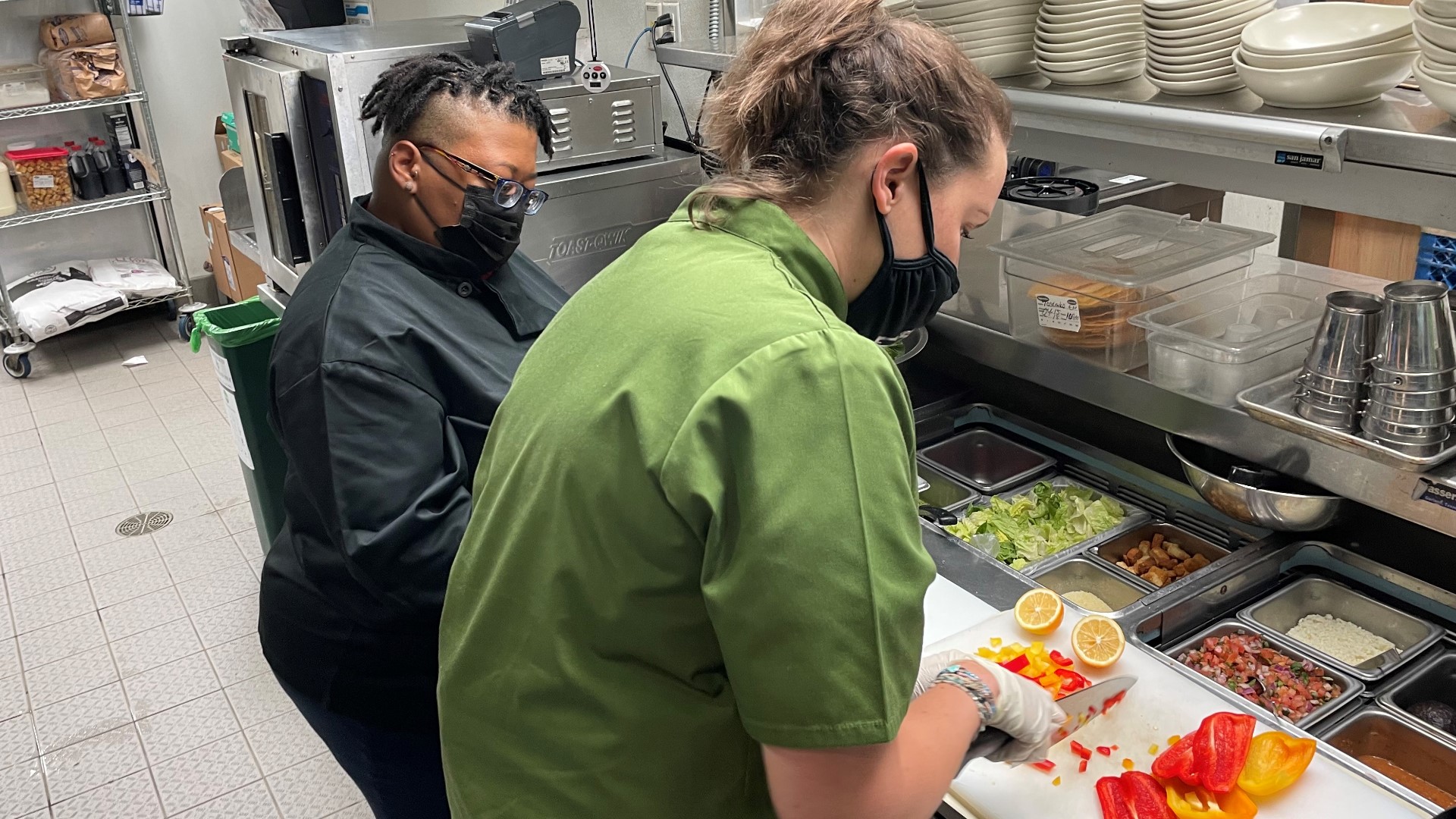 DALLAS — We’re told to live in the moment, be mindful, and be present – especially when we travel.

But we can’t ignore the future.

Every move we make makes a mark.

And DFW International Airport wants to make less of one.

“You’d be surprised to know that 30% of the state’s waste to landfills comes from North Texas - over 11 million tons,” said Robert Horton, vice president of environmental affairs and sustainability at DFW Airport.

According to airport calculations, DFW's terminals generate about 32,000 tons of solid waste a year.

And the airport says about a quarter of that trash is organic waste, or food, which isn’t really waste.

“Food is the single largest item in the American waste stream,” said Lauren Clarke, founder and CEO of Turn, a composting company based in Dallas. “That’s really a shame.”

Lorena Garcia’s Tapas Y Cocina in Terminal A is the first airport restaurant for Clarke’s staff to train in.

They are teaching airport kitchen workers to compost.

The goal is to throw as few things in a traditional trash can as possible.

The peel from an avocado, seeds and cores from bell peppers, and dark, unsavory pieces of lettuce get tossed instead into a special bucket provided by Turn.

“If it came from the earth, it can go,” said Roark.

That’s the main concept behind composting.

Leftover scraps from customer’s plates are also being emptied into the bucket.

Then Turn employees do the rest of the work.

They stop by the kitchen, empty the bucket into a larger receptacle, and haul away the food scraps to be composted.

The airport said the composting efforts by the kitchen staff at Lorena Garcia’s alone are having an impact: more than 250 pounds of trash is being diverted from local landfills every week.

“It’s the right thing to do and it’s also simple,” Harris said.

“It’s definitely an easy process and my crew picked up very quickly.”

Clarke is a master gardener and a trained chef. Seeing waste inside professional kitchens helped inspire her to launch Turn.

“I never imagined my future in waste management or composting,” Clarke admits. “In fact, my 6-year-old calls me ‘The Compost Lady.’”

She worries about the earth all 6-year-olds will inherit.

“We live in a now economy and we’re used to having everything delivered to our doorsteps. I harken back to the way my grandmother lived in the Great Depression where everything was savored and nothing was wasted,” Clarke said.

“I really think there has to be a way that we can marry the old ways with the new ways.”

Composting is new at DFW Airport, but efforts to go green are not.

DFW was the first airport in North America and the largest in the world to achieve carbon neutrality.

All of the airport’s electricity comes from wind.

The airport’s sustainability efforts began with an initial focus on air quality, Horton said, but the efforts have expanded.

“We can positively and negatively affect the neighbors around us, so it’s our responsibility to be a good neighbor,” said Horton.

He added that skeptics who think adopting green practices cost too much should look at DFW Airport as proof that environmentally friendly policies are not the enemy of business.

Through composting, Horton expects restaurants will be able to reduce the amount of food they buy and prepare, because they will have a better sense of what is going into their compost bucket.

“It’s the gift that keeps on giving,” he said.

According to Ken Buchanan, executive vice president of revenue management and customer experience at DFW Airport, the airport recognizes that more and more of its customers care about the footprint they leave behind.

The composting project will eventually expand to all restaurants and concession areas.

Clarke said most people don’t recognize how long it takes food to break down in a landfill, nor are they aware of the methane gas emitted during the process.

The USDA and EPA call methane a “powerful greenhouse gas.”

“The United Nations has said that if food waste was a country, it would be the third largest emitter of methane into our atmosphere behind China and the U.S.,” Clarke said.

Buchanan and Harris, the restaurant general manager, said learning about the composting process inspired both of them to do the same in their own homes.

“I think it’s really powerful for airport customers to understand that the end cycle of what they’re eating is actually going back to something good,” Clarke said.

“Our food starts from the earth and ideally it should go back to the earth in a positive way.”