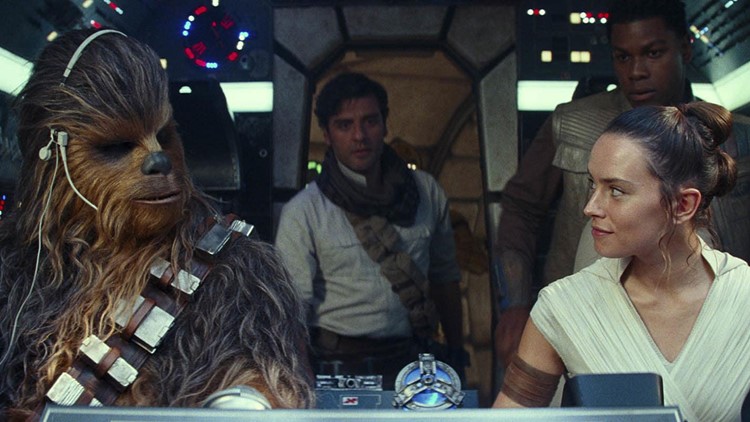 Let me just get this statement out of the way: "Star Wars: The Rise of Skywalker" is an immensely satisfying conclusion to the 40-year-old, nine-movie Star Wars saga.

It has an epic scope, thrilling sequences, and a lot of answers to nagging questions. It also has a few questionable story choices.

This series finale has enough story to easily pack-out three more movies, but we get all the good stuff in quick brief zaps of action and dialogue.

Without giving any major plot points away, the film starts with the iconic crawl setting up what we are about to see. Apparently, Emperor Palpatine’s voice is being heard throughout the galaxy. You remember him, right? He was the creepy old dude who electro-zapped Luke Skywalker at the end of “Return of the Jedi.” You thought he was dead, right? Yeah, me too.

Nope, Palpatine (Ian McDiarmid) is alive, in assisted care, and up to no good. And guess what? Han Solo’s probably-evil kid, Kylo Ren (Adam Driver), is being drawn to hook up (in a strictly sinister business way) with the newly-vocal evil Emperor.

Meanwhile, our heroes Poe (Oscar Isaac), Chewbacca (Joonas Suotamo), Finn (John Boyega), (and some spiky rando creature) are transmitting sneaky plans from the First Order into our favorite droid R2-D2 (who now has a convenient HDMI data port). Rey (Daisy Ridley) is off raining with General Leia (Carrie Fisher) on a jungle planet and waiting for the guys and Millennium Falcon to return.

All the good guys band tougher and decide it’s time to find this decrepit bad guy and mess him up a little. But first. they need to find a “wayfinder” (a map rock) to the mysterious realm/planet/universe where the Emperor is hiding.

The gang gets together along with C-3P0 and BB-8 and they hop on board the Falcon for a huge new adventure.

Explaining any more about the journey’s path would ruin the story. But rest assured, the film crosses a ton of territory and includes a lot of sightseeing, battle action, scary stuff, emotion, cameos, surprises, monsters, and some huge confrontations.

There’s so much presented in "Rise" it’s, at times, overwhelming. It’s a lot to keep up with. And if you don’t remember much of the first eight movies, some of it will go way over your head.

For Star Wars obsessives like me, I was cheering and gasping throughout. A few times, I yelled out loud in amazement. Other times, I was really questioning what I was seeing. It was basically a sand crawler full of fun and sci-fi goofiness. And, I loved just about every second of it.

"Rise of the Skywalker" is exactly what I hoped it would be. A huge joyously fun movie, with characters I love like family. It’s a ton of lore, canon and questions funneling together into a smashingly cacophonous conclusion.

The actors are, as expected, spot-on throughout the film. With Oscar Isaac (Poe) providing a ton a charm, Daisy Ridley (Rey) providing the heart and Anthony Daniels (C-3P0) providing some of the best lines of the film.

I also want to point out the special effects, which were noted in the 2019 Oscar short-list as a potential award nominee. They are absolutely seamless and stunning. I had a hard time telling where a physical set ended and where the computer graphics began. The whole movie looks amazing.

Director JJ Abrams stages some truly stunning set pieces throughout the film. He’s blasting through a ton of storylines and characters; and he does it in the most effective ways possible. He also dials up just the right amount of emotions when needed. Go ahead and pack a few tissues.

You can’t ask for much better, or much more, in a single Star Wars film. It gets almost everything right, fixes a lot of stuff from the past, and still keeps a bit of mystery lingering in the beloved universe.

Thankfully, after "Rise," the baggage of the current Star Wars universe canon will no longer be hovering over the films and the packs of wild internet spoiler-trolls. The new stories can start from square-one and perhaps streamline themselves apart from everything that has come before.

Until then, grab a chair droid, some blue milk, and enjoy this wonderful conclusion.