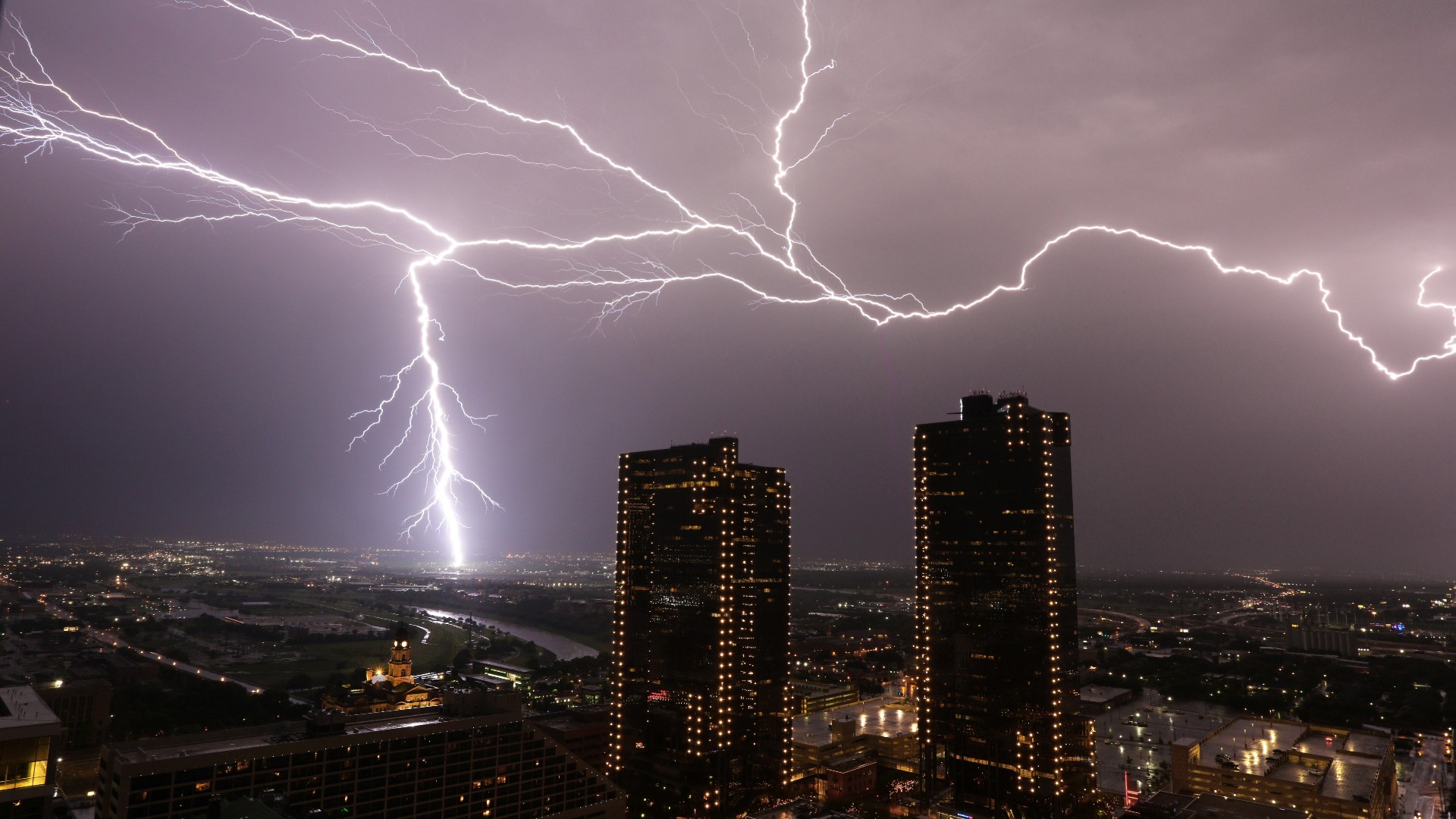 As if the heavy rain and flooding weren't enough, a sanitary sewer system on University Drive near I-30 in Fort Worth, about a mile away from TCU's campus, has overflowed into the street.

Update 6 p.m. Wednesday: Rounds of rain continue to affect the evening commute home. The heaviest of the rain is now southeast of DFW. Areas west of Fort Worth are beginning to dry out. Expect this wet weather to taper off west to east over the next few hours. After 9 p.m. most of the activity will be east of the immediate DFW area. Again, the severe risk is extremely low with flooding being our main concern through tonight. Flash Flood Watch is in effect through midnight.

Update 4 p.m. Wednesday: Our next batch of rain has started to spread across North Texas. The heaviest of the rain is falling south of DFW with embedded thunderstorms as well. Rounds of heavy rain will affect most everyone's evening commute. The severe risk is very low for DFW. Our main concern continues to be flooding due to our impressive 24-hour rainfall totals. The rain should start to taper off and move east by 9 p.m. All of North Texas dries out after midnight, setting up for a much better morning commute on Thursday!

Update 12 p.m. Wednesday: Much of North Texas is seeing a brief break in the heavy rain. However, another batch of showers and storms is filling in to the southwest of us. That means more rain as we head into the afternoon and evening hours. This cluster will move in our direction, affecting North Texas around rush hour. It's going to be a messy, slow-moving evening commute home. Additional heavy rain will likely lead to more flooding issues. The Flash Flood Watch stays in effect through tonight. Govern yourselves accordingly!

Update 10 a.m. Wednesday: Heavy rain overnight has led to numerous problems on the roadways this morning. Though we expect to see a small break now through midday, another heavy round of rain is expected later this afternoon and evening. The severe risk is very low for North Texas. Our main concern will be flooding due to additional rainfall on top of these impressive 24-hour totals.

Update 8 a.m. Wednesday: Rounds of showers and storms will continue Wednesday. It will not rain 100 percent of the day, but it will likely rain more often than not.

Last night's widespread rain is moving east and northeast out of the DFW area, but more rain is on the way. This round may be more hit or miss or scattered, but most places will see rain through the morning. Another round of widespread, heavier rain is possible this afternoon into this evening before tapering off this evening into Wednesday night.

RELATED: Plano apartment complex fire put out; firefighters say it may have been lightning-related

Update 4 a.m. Wednesday: The Flash Flood Watch has been expanded to include eastern and southeastern parts of North Texas through tonight. Rainfall totals of 2 inches to 4 inches will be common with isolated higher amounts. Some places have already seen that amount of rain with additional rain on the way. Flooding will continue to be a concern in areas that have seen the most rain since yesterday, and in areas that see the highest totals today. Do not try to drive into or through flooded roadways!

At this point, the core of the heavy rain has shifted into locations south and southwest of the DFW area. Rounds of showers and storms will continue overnight, which could cause localized flooding.

As of 12 a.m., Oncor has reported more than 14,000 power outages in the DFW area. Check here to see if your area has been affected.

Lightning was present in the Fort Worth area as well, as shown by these photos submitted by Brian Luenser.

Update 11:14 p.m.: A severe thunderstorm watch for Dallas and Tarrant counties and other areas of the metroplex has been expanded and extended until 5 a.m.

A flash flood warning has been issued until 2 a.m. for parts of Collin, Denton, and Dallas counties. Up to 3 inches of rain has fallen and an additional 1-2 inches are possible. Please do not drive into or through flooded roadways! Remember: Turn around, don't drown.

Here's a Facebook Live from WFAA meteorologist Pete Delkus on how long the rains will stay around:

The Fort Worth Fire Department has reported "just over 20" water rescues, and American Airlines has delayed and cancelled some flights. Check here to see if your flight has been affected.

As of 10 p.m., Oncor has reported more than 7,500 power outages in the DFW area. Check here to see if your area has been affected.

Update 9:45 p.m.: Rain started to move into downtown Dallas and other areas of the DFW metroplex.

Update: 3:30 p.m: A flash flood watch was issued through Wednesday night for DFW and to the west.

The severe weather threat on Wednesday is low once again for North Texas. Can't rule out a storm or two with wind/hail, but the main concern will shift to heavy rain and localized flooding. Rounds of showers and storms starting tonight through the day on Wednesday will contribute to rain totals of 2 inches to 4 inches being common across North Texas. Isolated amounts of 5 inches to 6 inches will be possible. This is enough to cause localized flooding in some locations. Remember to not drive into or through flooded roadways!

As the storm system exits, wrap-around or lingering showers will be possible mainly during the morning hours. Highest coverage will be across the eastern half of North Texas. Most rain will be on the light side with no severe weather expected.

Showers or storms will continue to move east with clearing skies. By Friday, rain is gone, and sunshine will return for Friday into this next weekend.