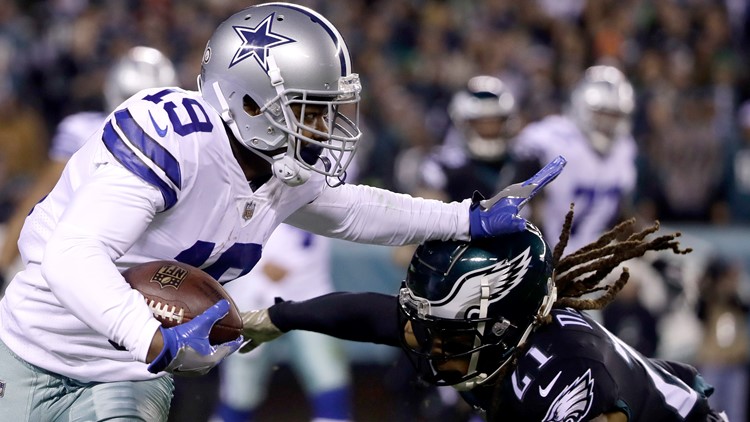 Memory Lane: How Amari Cooper and the Cowboys turned the 2018 season around against Philly

DALLAS — The Dallas Cowboys' season is in shambles at 3-3. They lost to the lowly New York Jets on the road as they continue to suffer through a three-game losing streak. If coach Jason Garrett doesn't turn things around, he could get fired mid-season just like his predecessor Wade Phillips in 2010. It has never been worse.

Actually, it has, and it was last year during the advent of the Cowboys kicking off their season series with the Philadelphia Eagles on Nov. 11, 2018.

Dallas was 3-5 and on a two-game losing streak. After entering the bye with a 3-4 record, the Cowboys made dramatic changes in firing new offensive line coach Paul Alexander and promoting assistant Marc Colombo. They sent their 2019 first-round pick to the Oakland Raiders for receiver Amari Cooper. Finally, quarterback Dak Prescott would have someone to throw to other than this new receiver-by-committee approach.

All of the bye-week modifications and improvements were for naught as Prescott chucked a red zone interception, kicker Brett Maher missed a chip shot field goal, and the defense helped quarterback Marcus Mariota live up to his 2015 first-round draft potential as the Tennessee Titans squashed the Cowboys 28-14 on Monday Night Football.

The Cowboys were 3-5 on the season and third place in the NFC East, where they held a 1-1 division record at that point. Washington with over-the-hill QB Alex Smith and RB Adrian Peterson were the class of the division at 5-3, and the Eagles were 4-4 coming off of a bye week into the Sunday night affair. Dallas would surely find a way to drop the close game, as they did in Week 7 at Washington, and the season would continue to unravel.

Dallas turned Philadelphia three-and-out to start the game, but the Cowboys similarly went three-and-out. However, they got help from their first-round linebacker on the Eagles' next possession when Leighton Vander Esch intercepted quarterback Carson Wentz and returned the pick 28 yards up to the Philadelphia 38-yard line. Even though the Cowboys had to settle for a 25-yard Maher field goal, they were on the board early 3-0 with 7:02 in the first quarter.

Late in the second quarter with 3:45 until halftime, the Cowboys added another field goal to increase their lead 6-0. Philadelphia chipped into the lead with a 56-yard Jake Elliott field goal. However, with 1:33 left until the break, Dallas felt they had ample time to add to their lead.

Prescott hit Cooper for 15 yards up to the Dallas 40-yard line, but then defensive ends Brandon Graham and Chris Long sacked Prescott for a loss of 13 yards to create a second-and-23 midway in the Cowboys' territory. The Eagles called their first timeout as they sought to get the ball back, and it seemed they would as running back Ezekiel Elliott carried for eight yards in what appeared to be a giving up on the drive. After another Eagles timeout and facing a third-and-15 at their own 35, Prescott hit rookie receiver Michael Gallup for 25 yards, and then receiver Cole Beasley for 21, to put Dallas a yard inside the red zone.

The Pro Bowl quarterback found Allen Hurns, part of the original "receiver-by-committee" for 17 yards, and then Prescott did it himself with a 1-yard touchdown run to give Dallas a 13-3 halftime lead.

Philadelphia added a 26-yard Elliott field goal with 9:39 in the third quarter, and then it appeared the wheels were coming off the wagon for Dallas. On the ensuing drive, Prescott fumbled on a third-and-8 from the Philadelphia 23. Even though he recovered, the drive was killed and Maher would have to add three points from 42 yards away. The field goal was no good, and the Eagles were back on the march.

It took the Eagles 10 plays, but Wentz connected with tight end Zach Ertz, Jason Witten's heir to tight end greatness in the NFC East, for a 15-yard touchdown. An extra point from Elliott tied the game 13-13 with 2:08 in the third quarter.

Prescott and the Cowboys responded with a nine-play, 75-yard drive that Elliott capped off with a 7-yard touchdown to push Dallas out in front 20-13 with 11:42 in the game.

Philadelphia matched the Cowboys with their own seven-play, 74-yard drive that was aided by a 51-yard catch from receiver Nelson Agholor. Wentz found Ertz again for a 1-yard touchdown and the extra point tied it 20-20 with 7:27 left.

The Cowboys added another touchdown drive as they went 75 yards in eight plays with Elliott scoring a 1-yard touchdown to give Dallas a 27-20 lead with 3:19 to play.

Dallas turned the Eagles over on downs the next drive as Ertz gained six yards on a fourth-and-7 from the Dallas 35-yard line. Though the Cowboys couldn't gain a first down to go into victory formation, the defense held again and safety Jeff Heath broke up some trickery as Ertz gained 23 yards to the Cowboys' 9-yard line and tried to lateral to receiver Golden Tate for the tying score. Dallas got the win at Lincoln Financial Field, and the Cowboys were 4-5 overall with a 2-1 record in the division.

"I think it's something that you can always lean back on," center Travis Frederick, who was on injured reserve at the time dealing with Guillain-Barré syndrome. "Any time that you have success or adversity, it's a positive because you get a chance to learn from that. What helped us have success and how did we get better from the adversity? So, you look at those things and you try to get better and continue to improve throughout the season."

The win was part of a 7-1 record that helped Dallas win the NFC East with a 10-6 record, beat the Seattle Seahawks in the NFC wild-card, and come within eight points away from going to overtime with the Los Angeles Rams in the NFC divisional playoffs.

The Cowboys are in a much better situation than they were last season. A win would cure the ills a three-game losing streak has brought upon them, and a 3-0 mark in the division would go a long way towards repeating as division champions. Dallas has to establish that touchstone once again on a Sunday night, but this time at AT&T Stadium.

Do you think the Cowboys will be able to repeat history with the Eagles coming to Arlington and Dallas looking to end an early-season slide? Share your thoughts on the recent history between these two rivals with Mark on Twitter @therealmarklane.