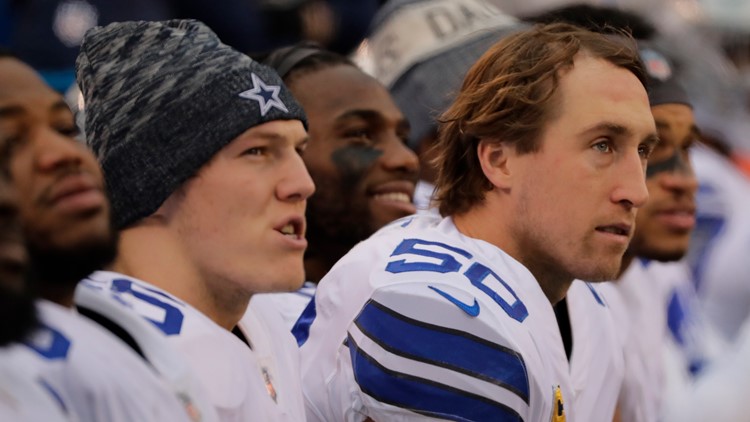 Photo by: AP
Dallas Cowboys' Leighton Vander Esch, left, and Sean Lee sit on the bench during the second half of an NFL football game against the New York Giants, Sunday, Dec. 30, 2018, in East Rutherford, N.J. (AP Photo/Frank Franklin II)

Despite a rookie linebacker leading the team in tackles and being 32 years old, the Dallas Cowboys still have plans for linebacker Sean Lee as he enters his 10th professional season.

Speaking with reporters at the NFL combine, Cowboys coach Jason Garrett indicated Lee would "absolutely" have a role in 2019. However, he used examples of how center Travis Frederick, who missed the entire season with Guillain-Barré Syndrome, helped the offensive line on the sidelines.

"Sean has been such a good player for us and he, too, like Travis, did such an amazing job with our young linebackers that we had," Garrett said. "If you think about Jaylon Smith, who had not played a lot of football for us, coming off the injury and then obviously Leighton Vander Esch being a rookie, they hadn't played a lot of snaps in the NFL. When they were playing more and more and more in Sean's absence, he did such a great job helping those guys in their preparation, how they get ready for a game, how they handle the different situations that come up in a game."

Said Garrett: "He just did a fantastic job and he's a really good football player, just watch him play in the [Los Angeles Rams divisional playoff] game the number of plays that he made. He's got a lot of football left in him and he'll be a part of what we're doing going forward."

The 6-2, 245-pound linebacker produced 30 tackles, 0.5 sacks, a pass deflection, and a fumble recovery in seven games in 2018. Lee would be 33 years old come Opening Day 2019. The former 2010 second-round pick from Penn State has played in 93 games out of a possible 144, missing 51 games, or over three seasons worth of game action. The availability problems have compromised all of the ability that the All-Pro linebacker can bring to the defense.

"Unfortunately, that’s something Sean has dealt with for a large part of his career," Garrett said. "Nobody cares about it more than Sean Lee. Nobody works harder than Sean Lee. But unfortunately durability has been an issue. That was a big reason we drafted these young linebackers the last couple of years because Sean has missed time. He’d be the first to tell you that. But when he has played he has played really well."

Linebacker Damien Wilson, drafted in the fourth round of 2015, was one of the young linebackers the Cowboys drafted during Lee's tenure, and now Wilson is without a contract. Whether the club decides to stay with the approach of drafting young linebackers to stock behind Lee or roll with him on the field starting alongside Smith and Vander Esch, the Cowboys know his presence will be significant.

"He’s had a big impact on our football team, not only what he’s doing on the field but off the field with his leadership," said Garrett. "You continue to try to find the key with all your players to keep them healthy. Sean works harder at this than anybody I’ve ever been around. We’ll keep trying to do that, try to keep him on the field.”

Do you think it’s time to part ways with Sean Lee or do the Cowboys still have room for one of their captains? Share your thoughts with Mark on Twitter @therealmarklane.