"They think I'm fragile. I tell them I'm perfect. Just as fine as them," he said. 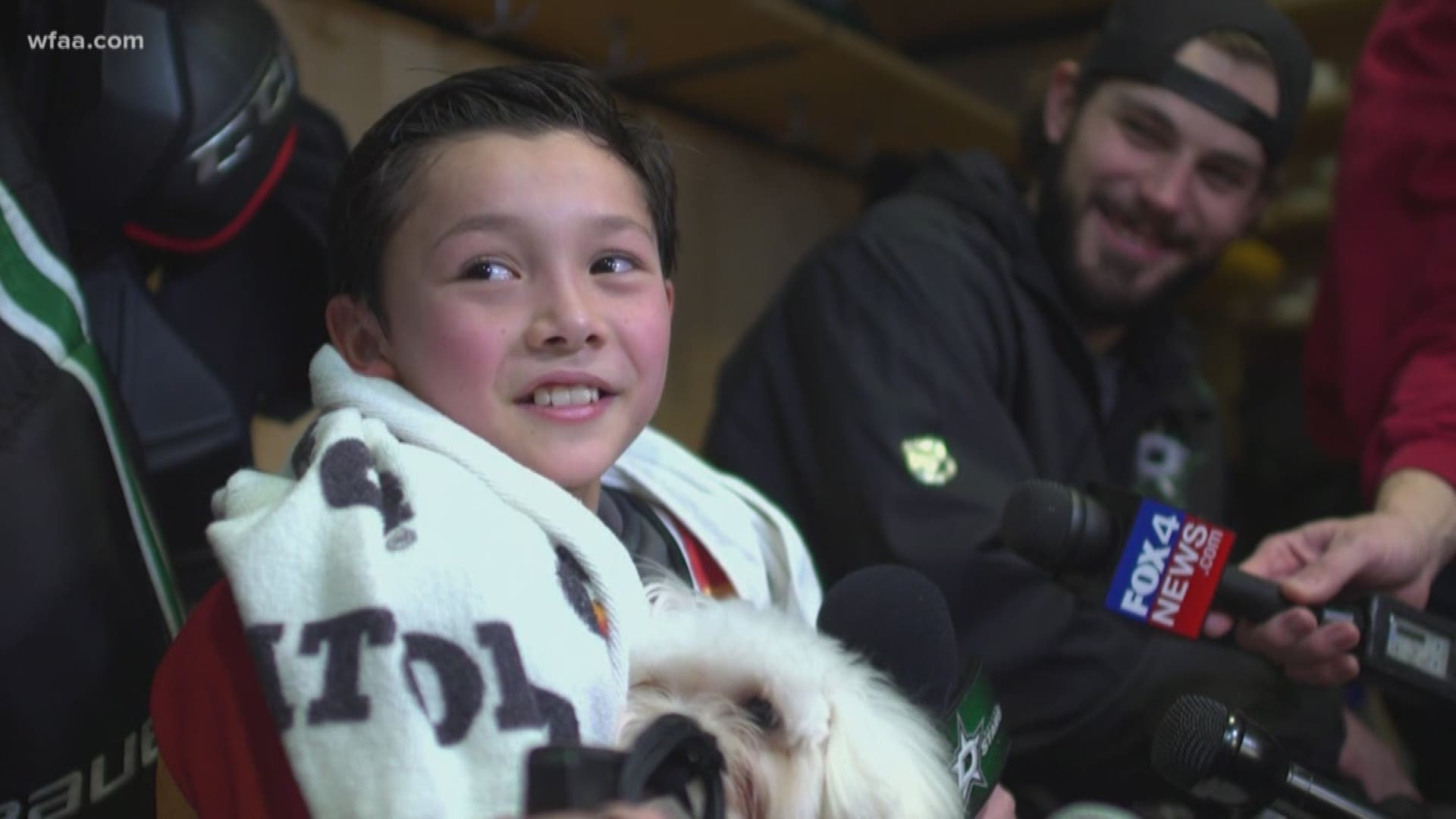 Thanks to the Make-A-Wish Foundation and the Dallas Stars, a 10-year-old hockey fanatic had the day of his life on Wednesday, and promises that on his way to becoming a "professional hockey-playing heart surgeon" that he will remember this day forever.

Anderson McDuffie’s life got off to a pretty rough start. At birth, his parents knew he was born with a serious heart problem. The diagnosis was Tetrology of Fallot, which means he had four different heart abnormalities including a hole between chambers and enlarged heart muscle. His first open heart surgery happened when he was just four months old, March 18, 2009.

He did recover, but considered too fragile for strenuous physical activity, his doctors told him and his parents that contact sports were out of the question. "It's...loneliness," Anderson said when asked to describe what it was like not being able to be the loud, rambunctious, "normal" little boy he wanted to be.

And then last year, nearing his 10th birthday, a life-and-death tune-up of sorts. Doctors had to stop his heart all over again, repair a heart valve this time.

In all this struggle, in all these surgeries and visits to the doctor, he had one very specific reason to get better. "Hockey is, it gives him life," his mom, Loan McDuffie said.

Anderson's heart bleeds hockey. The west corner of his family’s West Plano garage is reserved just for practicing slapshots. His upstairs bedroom is decorated in everything Dallas Stars green. And next to his autographed picture of Dallas Stars center Tyler Seguin, he told me what he often tells people when they question his dream of playing hockey someday too.

"They think I'm fragile. I tell them I'm perfect. Just as fine as them," he said.

"The heart wants what it wants," his mom said. "I can't stop him from doing anything. He said I will do this [second] heart surgery if I can play hockey."

Doctors told him that it would be a possibility. "But he pushed through it so that he could do what he wanted to do, which is always hockey!" she said.

"When you see, they've Zambonied the ice, and it's completely flawless," she asked Anderson."

And Wednesday morning, he arrived at his "heaven" on a chartered bus accompanied by a police escort.

He, his older brother, and a group of teammates they dubbed the "EKGs", were to meet the Dallas Stars at their practice facility in Frisco. Anderson's Make-A-Wish was coming true. He and his friends would face off on the ice against the Dallas Stars.

And for two 10-minute periods, that’s exactly what he and the EKG’s did. They skated alongside their heroes, celebrated goals along with a standing room only crowd cheering them on. And what would hockey be without a fight? Anderson got a taste of that too in a brief pretend dustup with the Stars John Klingberg.

"You want to live every day with full passion," Loan McDuffie said. "So if we tell him he can't play hockey, there was no point in even fixing his heart. Because that's not who he is. He doesn't want to live protected in a bubble."

The final score of the scrimmage was the EKG’s 6, the Dallas Stars 5. And, thanks to Make-A-Wish and the Stars, it was a chance for Anderson to become the hockey hero he always dreamt he would be.

"It gives them wind in their sails. It gives them motivation. And it gives them hope and it spreads through some amazing kindness," his mom said. The McDuffies are also heavily involved with the Make-A-Wish Foundation and have helped with the wishes of at least 30 other children.

"Just the idea of having something as amazing as a wish got him through the worst days," she said.

As for his best day, seated next to his hero, Tyler Seguin, in the Dallas Stars locker room after the scrimmage, he only needed one more word to describe that.

"How long are you going to remember this," I asked him.  "Forever," Anderson answered.

Forever for a little boy with a mended heart that today, is as full as it can be.