Here is a look back at just some of what our planet endured in the past 12 months. 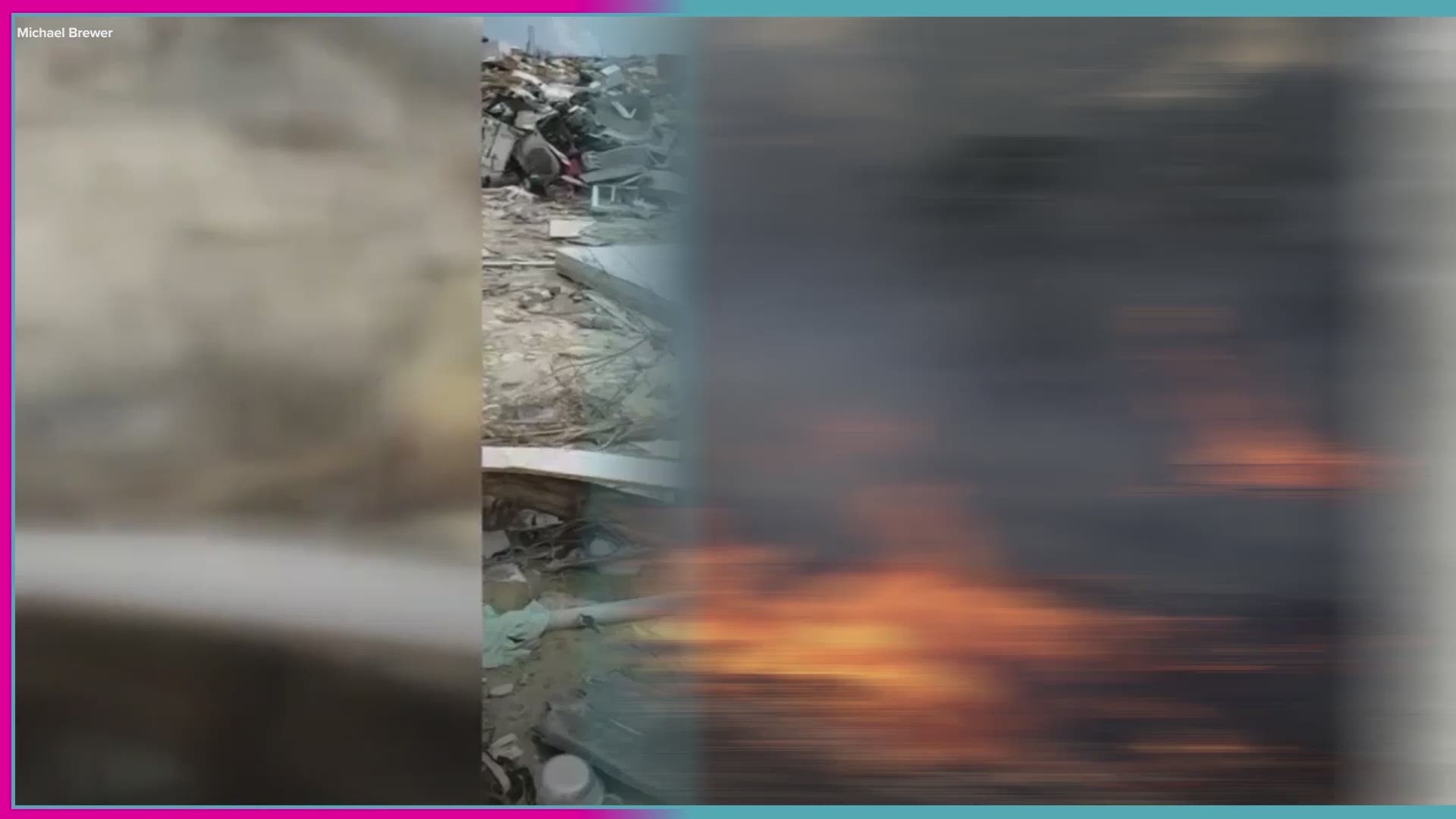 The final year of the decade once again came with its share of extreme weather events and other natural disasters. But they came with a backdrop of increased global awareness of climate change and the fear that continued warming of the planet could result in weather events that are even more severe.

Here is a look back at just some of what our planet endured in the past 12 months.

After Puerto Rico, two years removed from Hurricane Maria, dodged most of the wrath of Dorian in September, the storm made its way to the Bahamas. As a Category 5 and later a 4, Dorian parked itself along the islands for more than a day -- barely moving with its incessant winds tearing buildings apart. 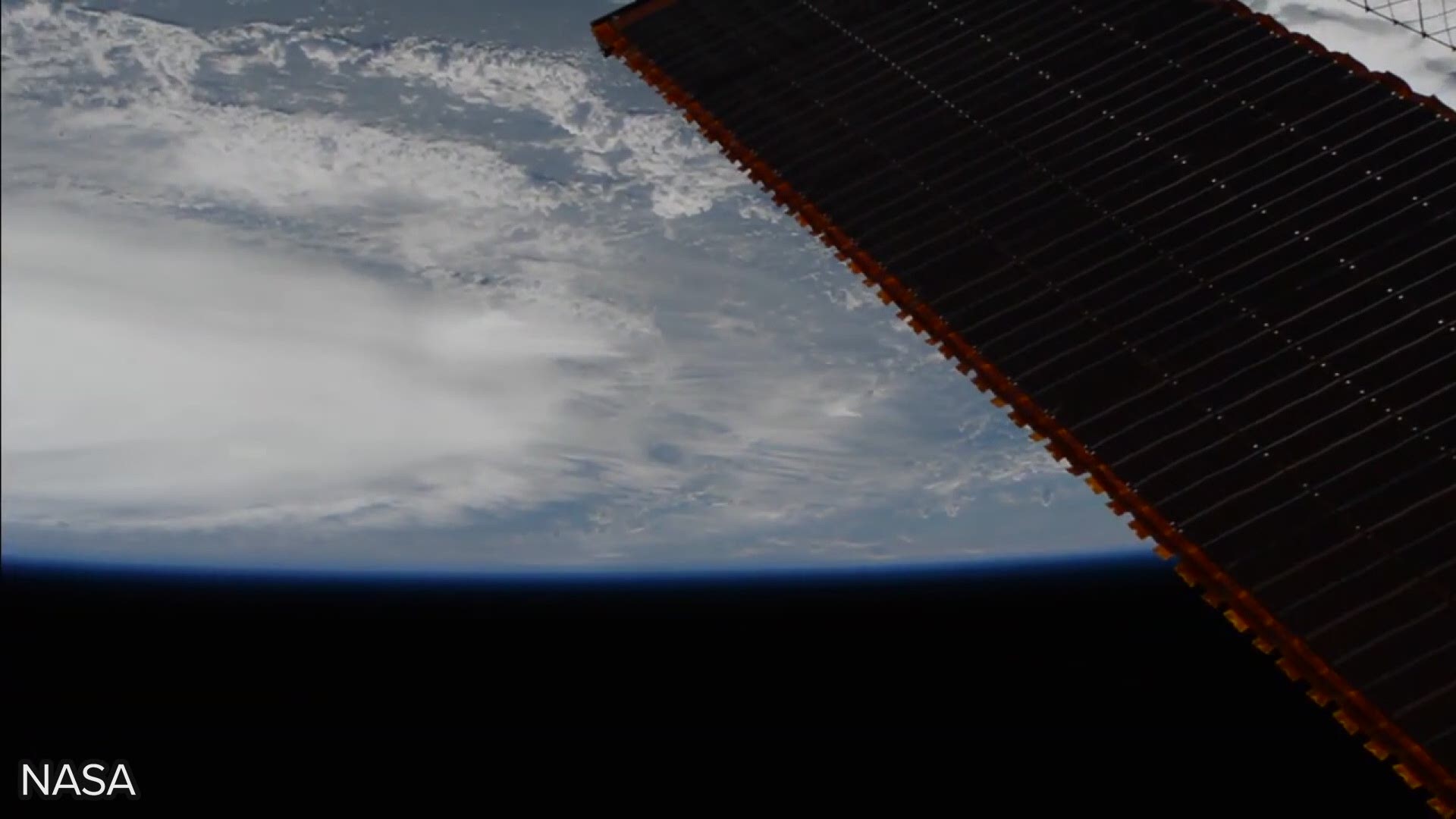 "This is unprecedented," said Jeff Masters, meteorology director at Weather Underground. "We've never had a Category 5 stall for so long in the Atlantic hurricane record."

It was the convergence of a high-pressure system and low-pressure trough that were fighting it out. 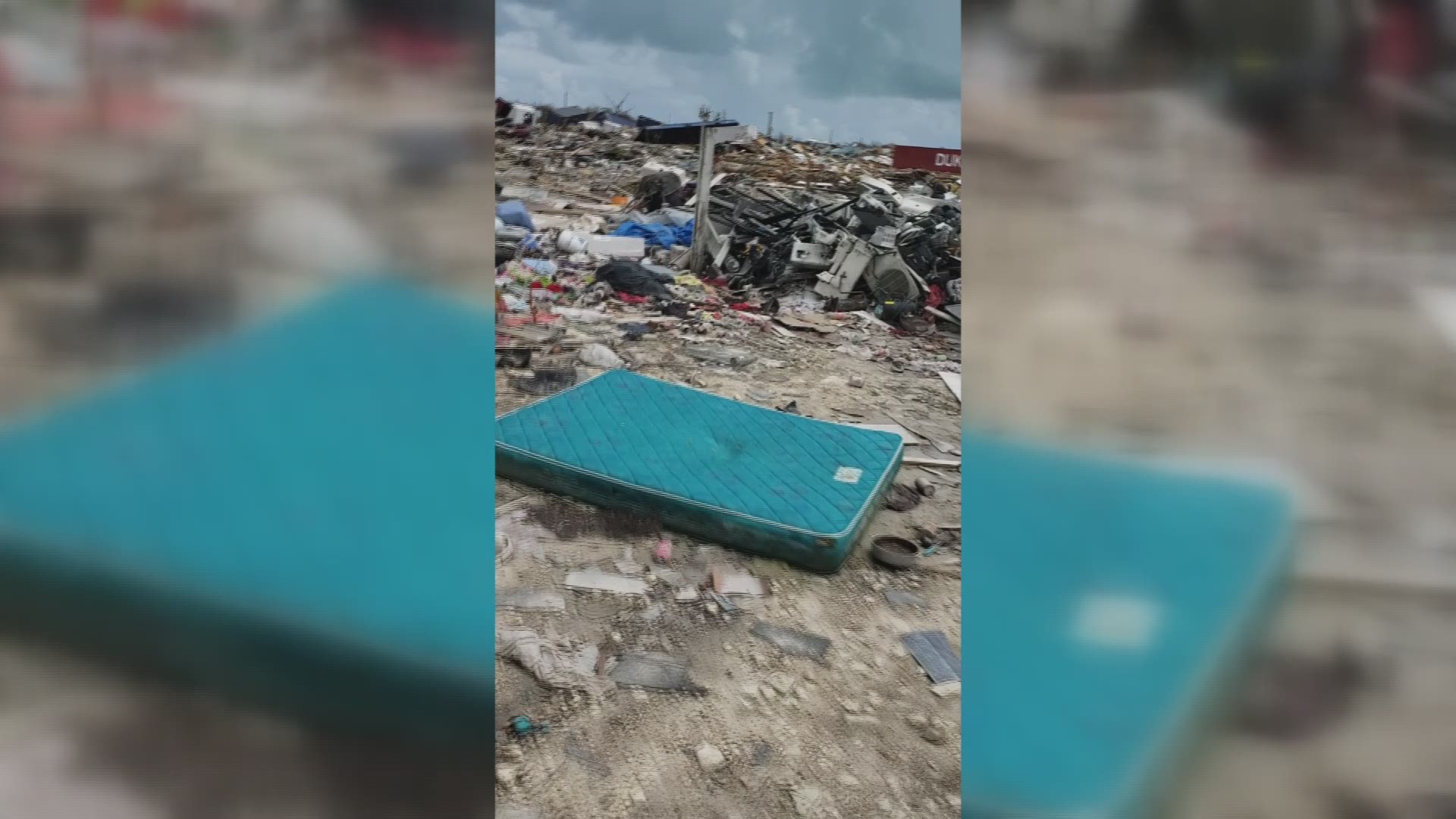 A hurricane hunter plane shot video from inside the eye, showing the "stadium effect." That's when a hurricane makes a cone shape so that being in the eye appears like sitting in a sports stadium. 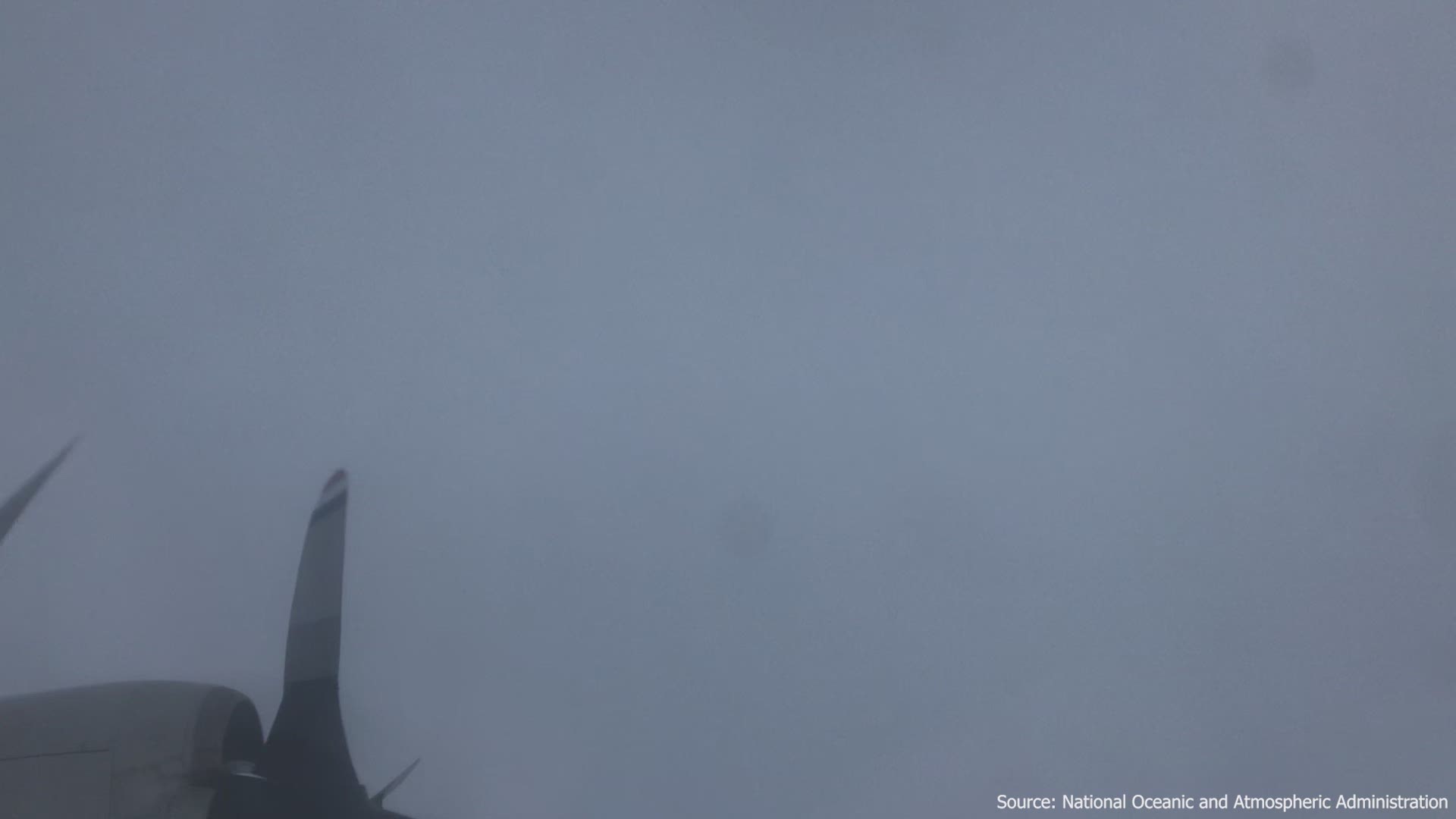 After killing dozens of people and doing an estimated $3.4 billion in damage to the Bahamas, the storm made its way up the eastern seaboard, grazing the Carolina coast and hitting North Carolina's Outer Banks before moving into Canada. 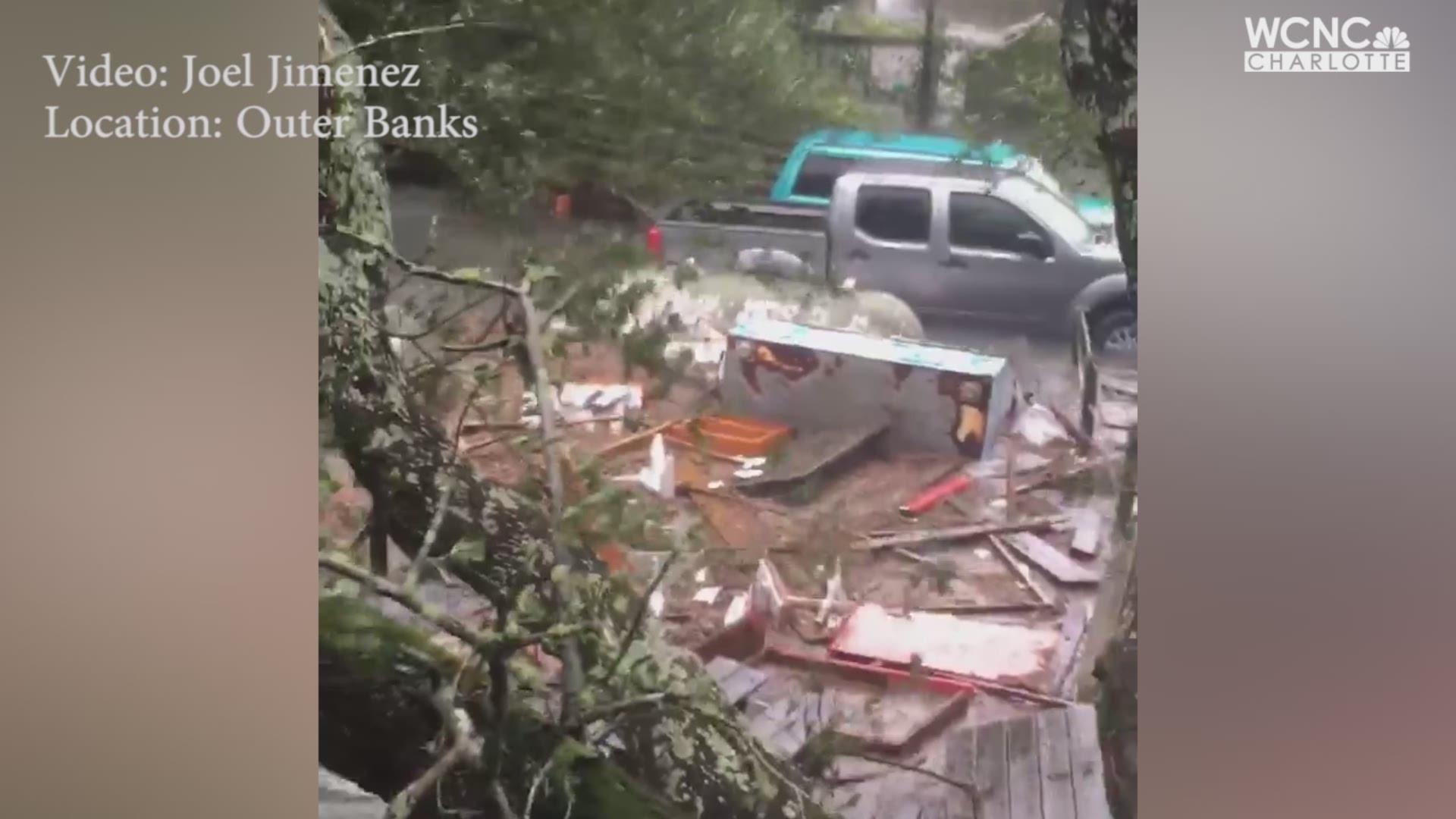 Imelda wreaked havoc in a different way than Dorian, bringing torrential rains that flooded parts of Texas and Louisiana in late September.

Imelda was the fifth-wettest cyclone in U.S. history excluding Hawaii and Alaska, dropping an estimated 43.15 inches of rain on Southwest Texas. 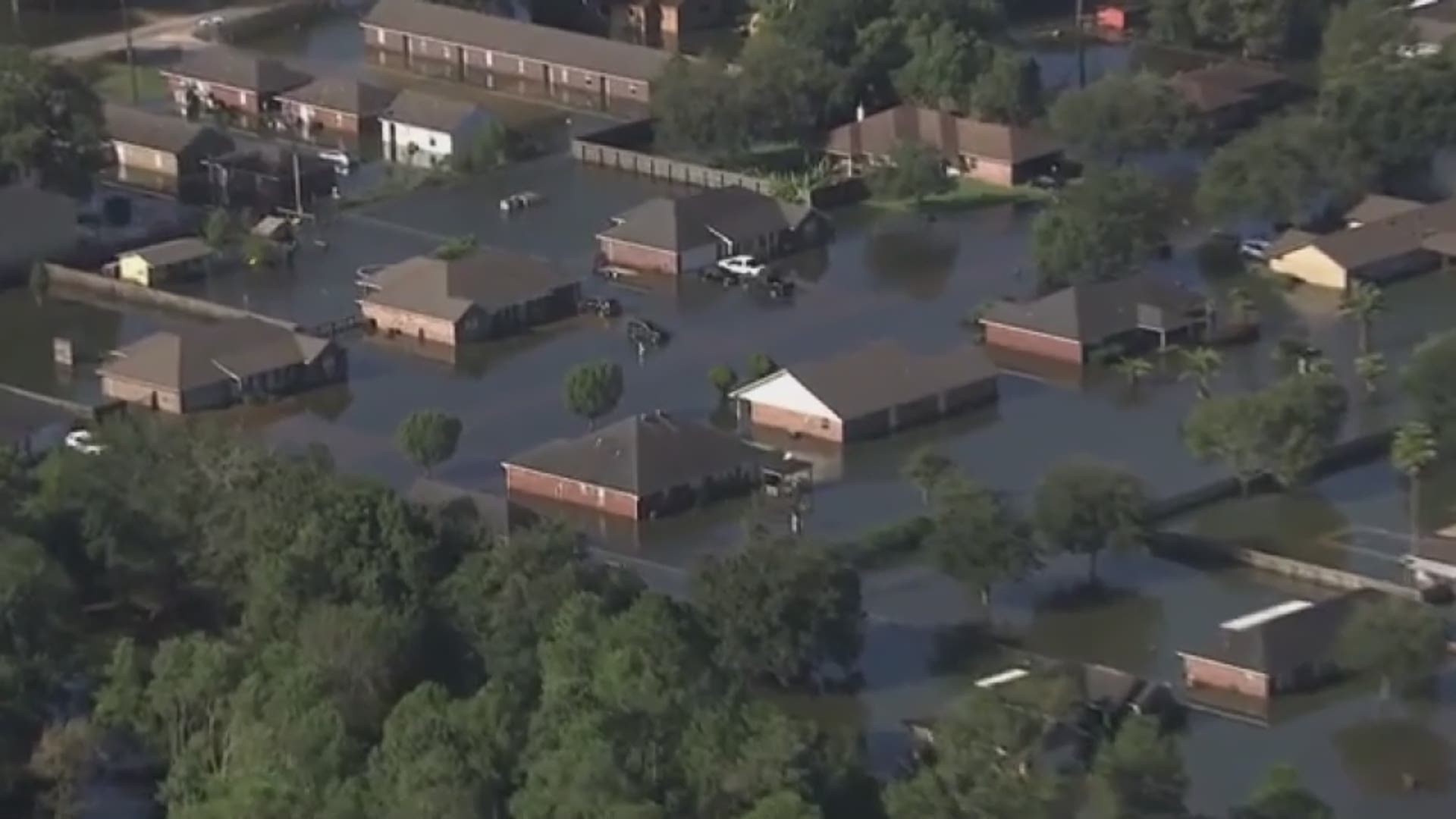 While first responders were on the job protecting the public, one hotel worker in Beaumont, Texas, also answered the call to duty. Satchel Smith, 21, worked 32 hours straight all by himself. 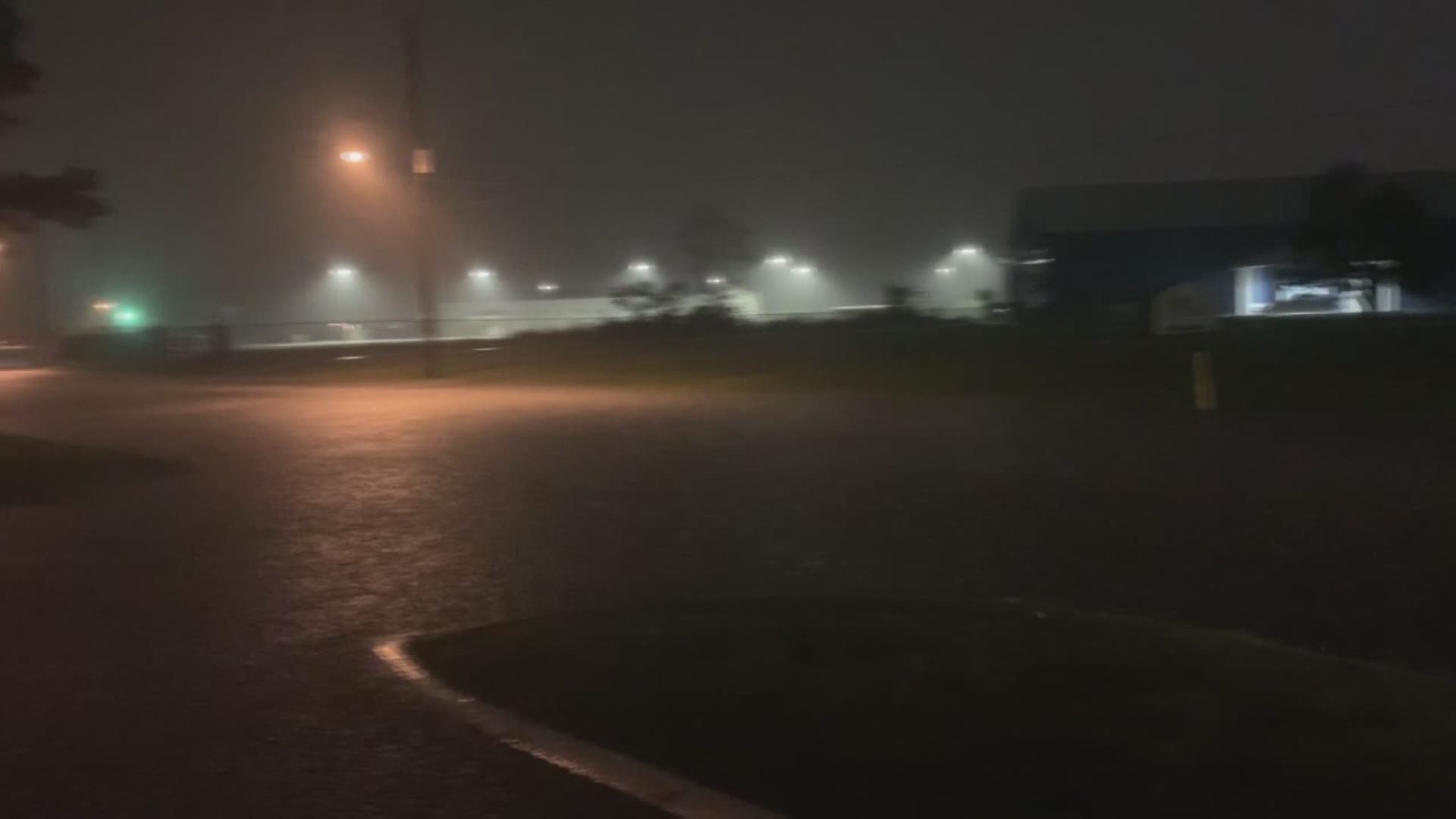 At least five deaths were blamed on Imelda.

Californians were hit with a one-two punch in October. Wildfires fueled by powerful winds threatened homes and lives in both northern and Southern California.

The fires in the south threatened the high-end Brentwood section of Los Angeles. They destroyed at least eight homes and damaged many more, forcing Los Angeles Lakers star LeBron James and thousands of others to flee. 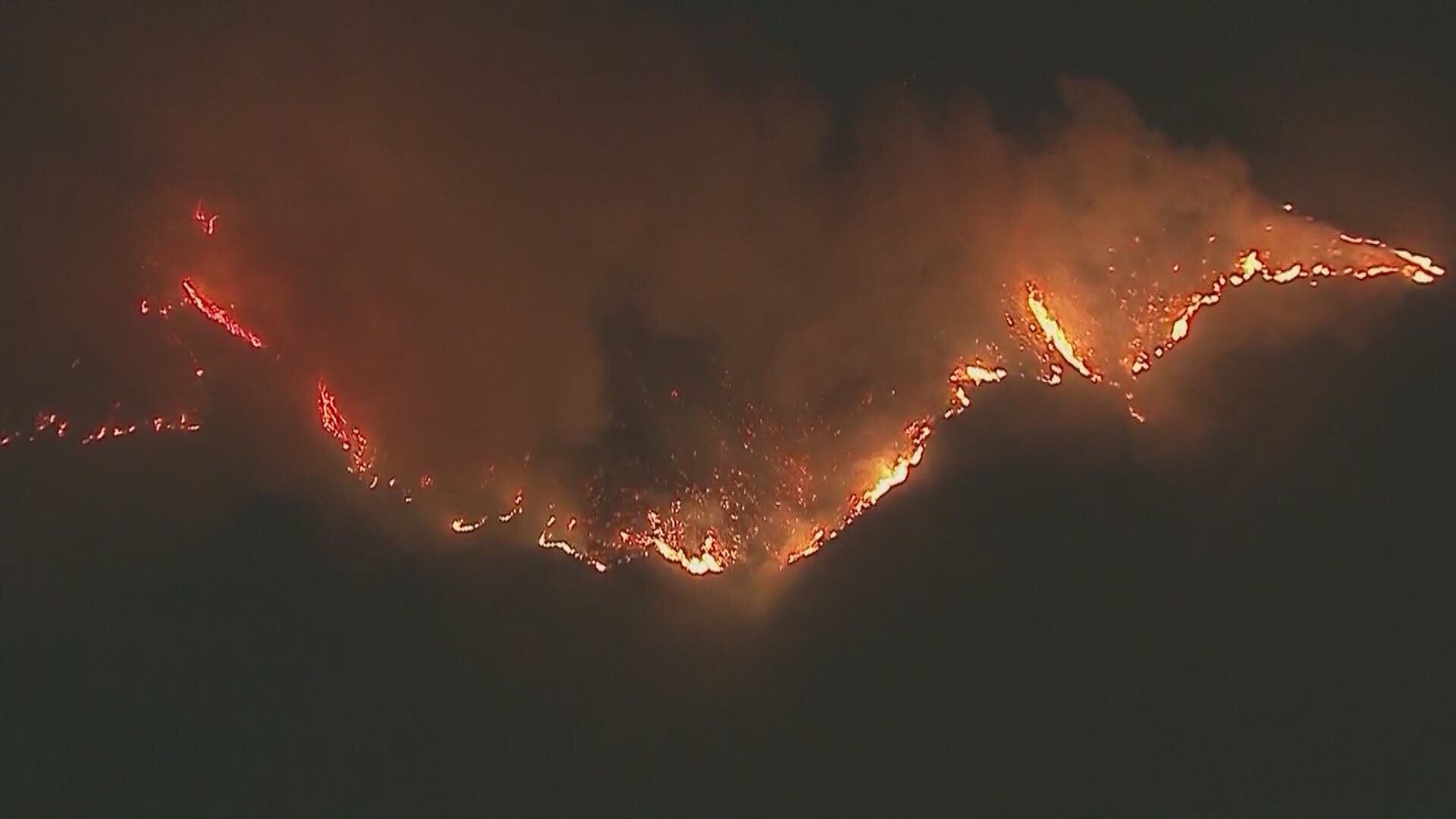 In addition, utility PG&E shut down power to hundreds of thousands of customers over several days due to concerns that winds could knock down power lines, sparking more fires. The move came a year after a wildfire almost totally destroyed the town of Paradise, that was blamed on downed power lines.

The fires in the Amazon rainforest received worldwide attention during the summer.

Brazil's National Institute for Space Research said in August it found an 84% increase in the number of fires burning in the Amazon compared to 2018.

Credit: AP
A fire burns trees and brush along the road to Jacunda National Forest, near the city of Porto Velho in the Vila Nova Samuel region which is part of Brazil's Amazon, Monday, Aug. 26, 2019. The Group of Seven nations on Monday pledged tens of millions of dollars to help Amazon countries fight raging wildfires, even as Brazilian President Jair Bolsonaro accused rich countries of treating the region like a "colony." (AP Photo/Eraldo Peres)

Environmental activists blamed Brazilian president Jair Bolsonaro for his pro-development policies for a reportedly sharp increase in deforestation. Bolsonaro, without evidence, claimed non-governmental organizations were responsible for starting the fires, saying they were doing it to attack him politically.

One statistic that was repeated by activists was that the Amazon rainforest produces 20% of the world's oxygen. Our VERIFY team looked into that and discovered that claim is false. Scientific data and multiple experts say that the Amazon forest is actually responsible for around 1% to 6% of the world’s oxygen. 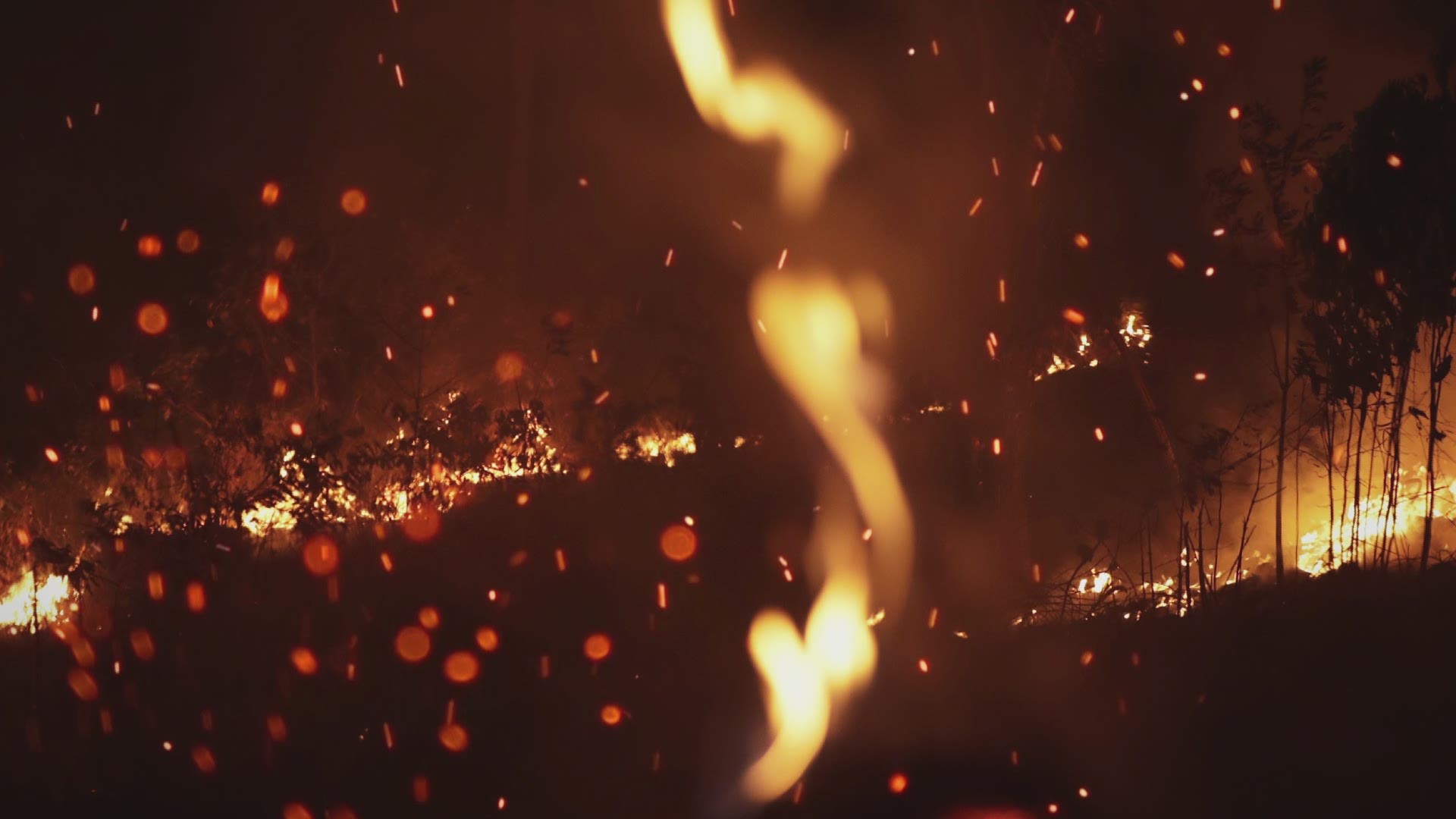 Flooding in the midwest took a toll on residents, farmers and even the home of the U.S. Strategic Command in Nebraska.

Billions of dollars in damage was done by flooding in March. One Iowa farmer estimated he and 28 farmers in his county lost $7 million in grain alone. Nebraska Farm Bureau at one point estimated $400 million of crop losses from fields left unplanted or planted late and up to $500 million in livestock losses.

Credit: AP
In this March 29 2019 photo, flood waters from the Missouri River destroyed a grain silo and washed corn out of it, on a farm in Pacific Junction, Iowa. (AP Photo/Nati Harnik)

Heavy rains brought record floods to Arkansas, Missouri and Oklahoma in May and June. One homeowner who lives near the Arkansas River said this was his fourth flood, but it will be the last. He's giving up on rebuilding after his trailer was devastated.

“After seeing what I was facing, absolutely not,” said Jim Dixon. “It looked like someone tossed a hand grenade inside my place, the way the water had floated all my furniture, destroyed my TV sets, appliances." 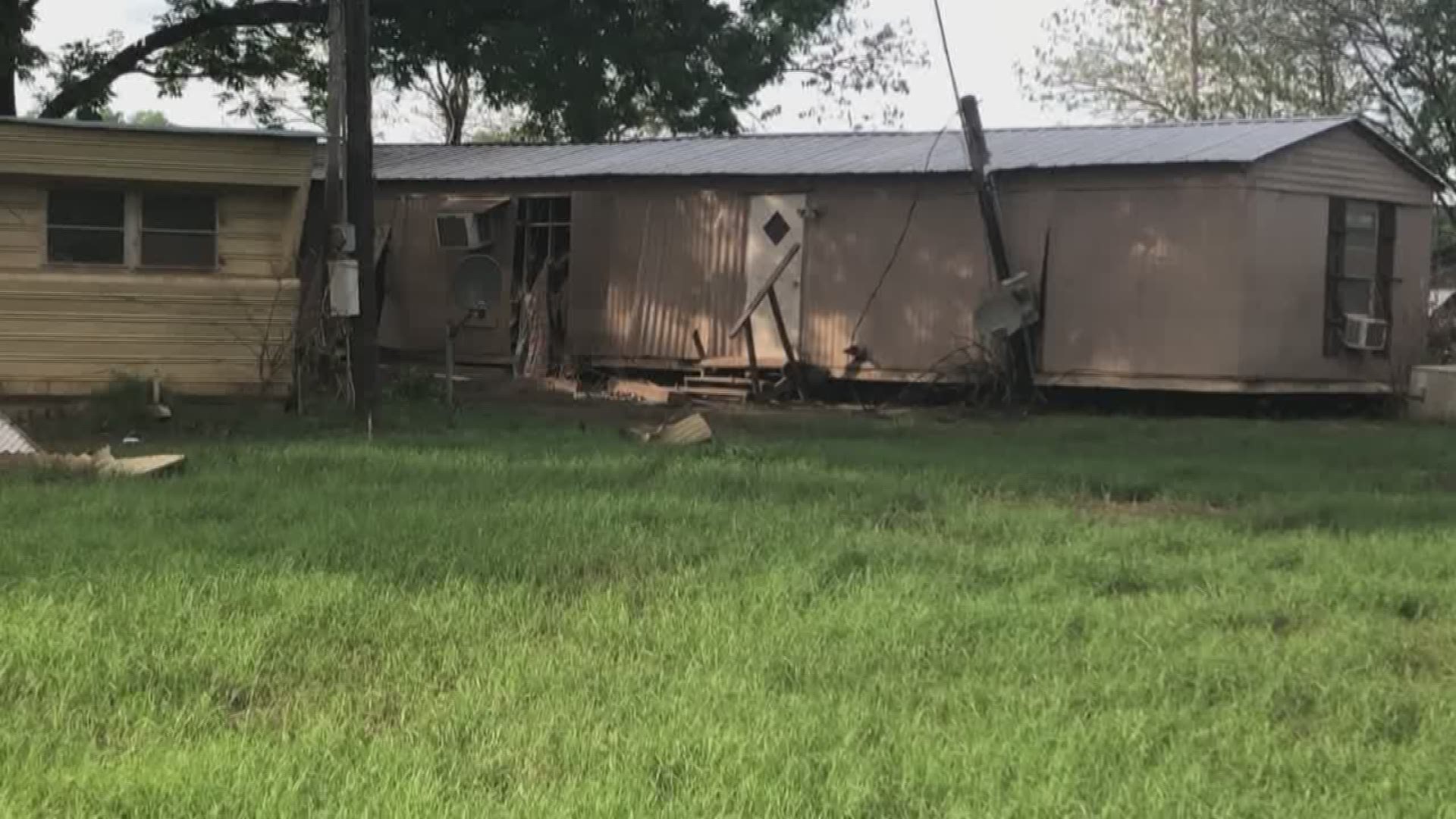 Farmers who lost billions of dollars in grain, livestock and equipment must decide whether to continue to gamble on fertile bottomlands, as federal officials determine how many damaged levees can and should be rebuilt.

Many farmers now believe heavier rains are the new normal -- even those skeptical that human activity is a factor. With the ground still soggy heading into winter, experts say the stage is set for more flooding in spring 2020.

A powerful EF4 tornado with estimated maximum winds of 170 mph tore through Beauregard, Alabama, on March 3. It killed 23 people, injured 90 more, and left a path of destruction spanning nearly 27 miles. 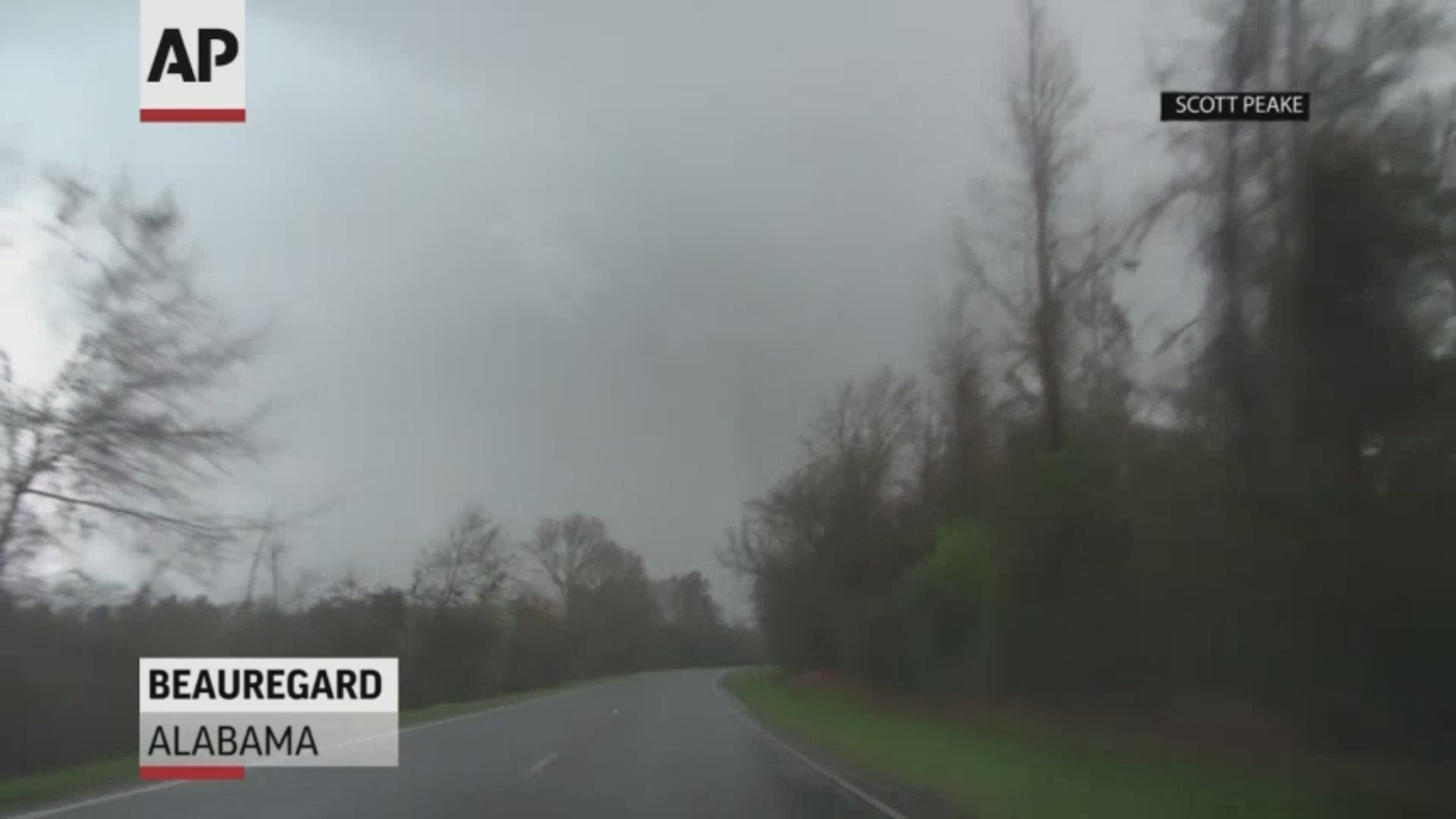 At some points, the path was as side as 16 football fields. It was the deadliest tornado in the U.S. in six years. 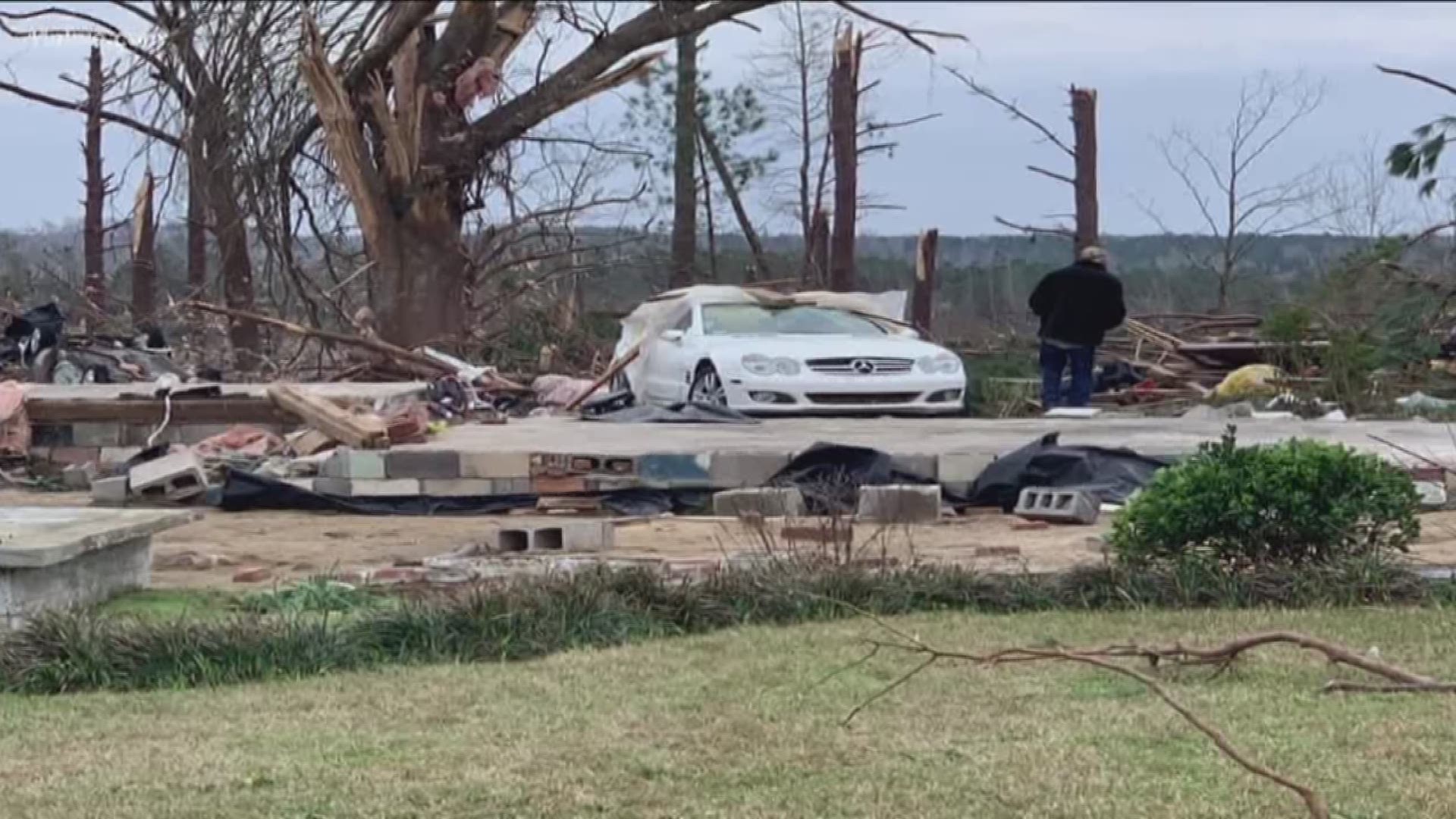 Another powerful tornado tore through much more densely-populated Dallas on October 20. The EF3 had wind speeds of up to 140 mph. While it did immense damage, nobody was killed. It was one of nearly a dozen tornadoes to cut through North Texas that day. 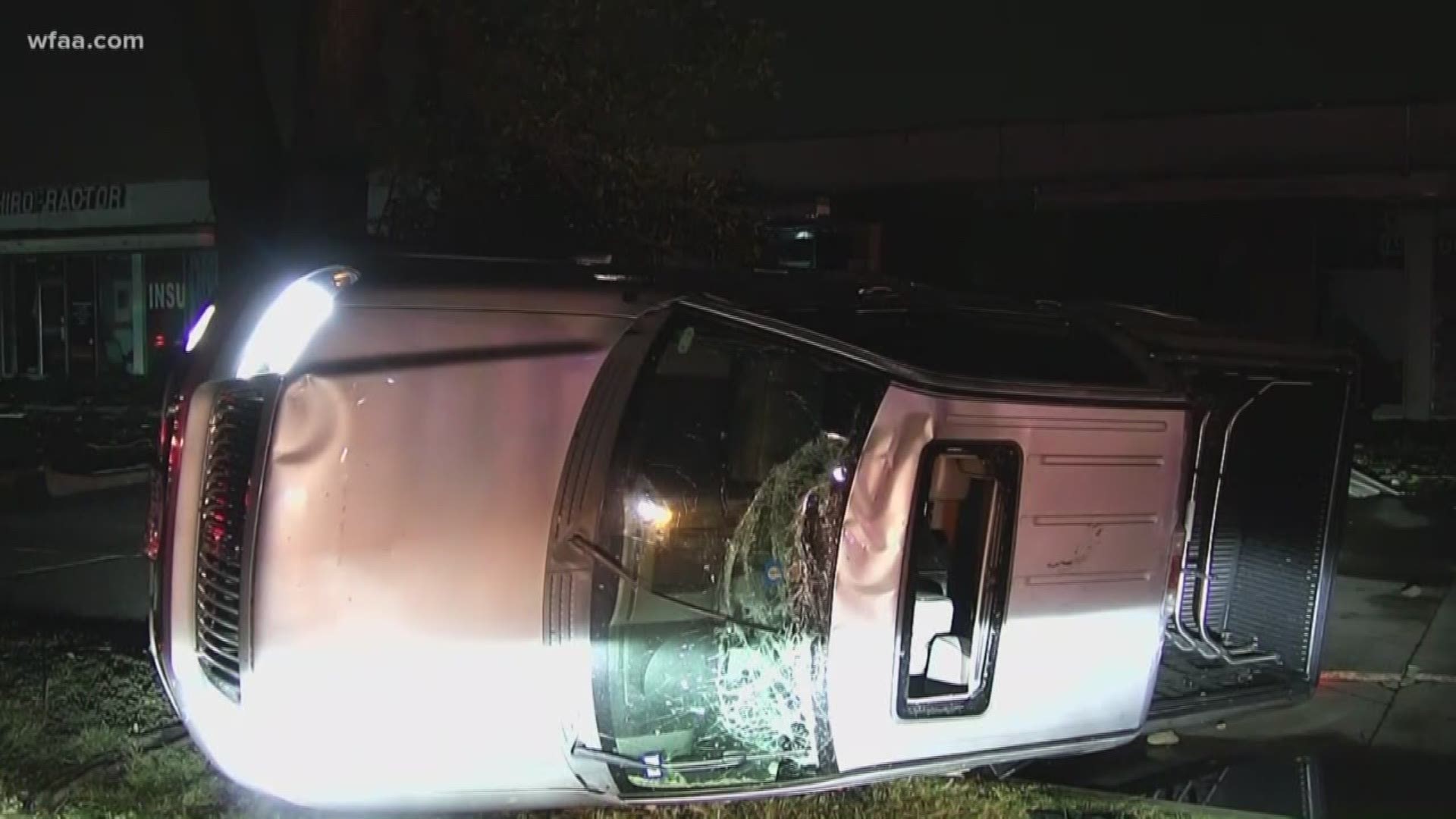 Another powerful tornado hit the Deep South in December, killing at least three people in Louisiana and Alabama.

It seemed everyone in the northern half of the U.S. had to deal with one major snowpocalypse at some point in 2019.

A polar vortex had up to 90 million Americans facing sub-zero temperatures in late January. Normally, polar vortexes stay in the arctic, but wind speeds from the vortex and jet stream slowed down, causing the frigid air to creep into North America. 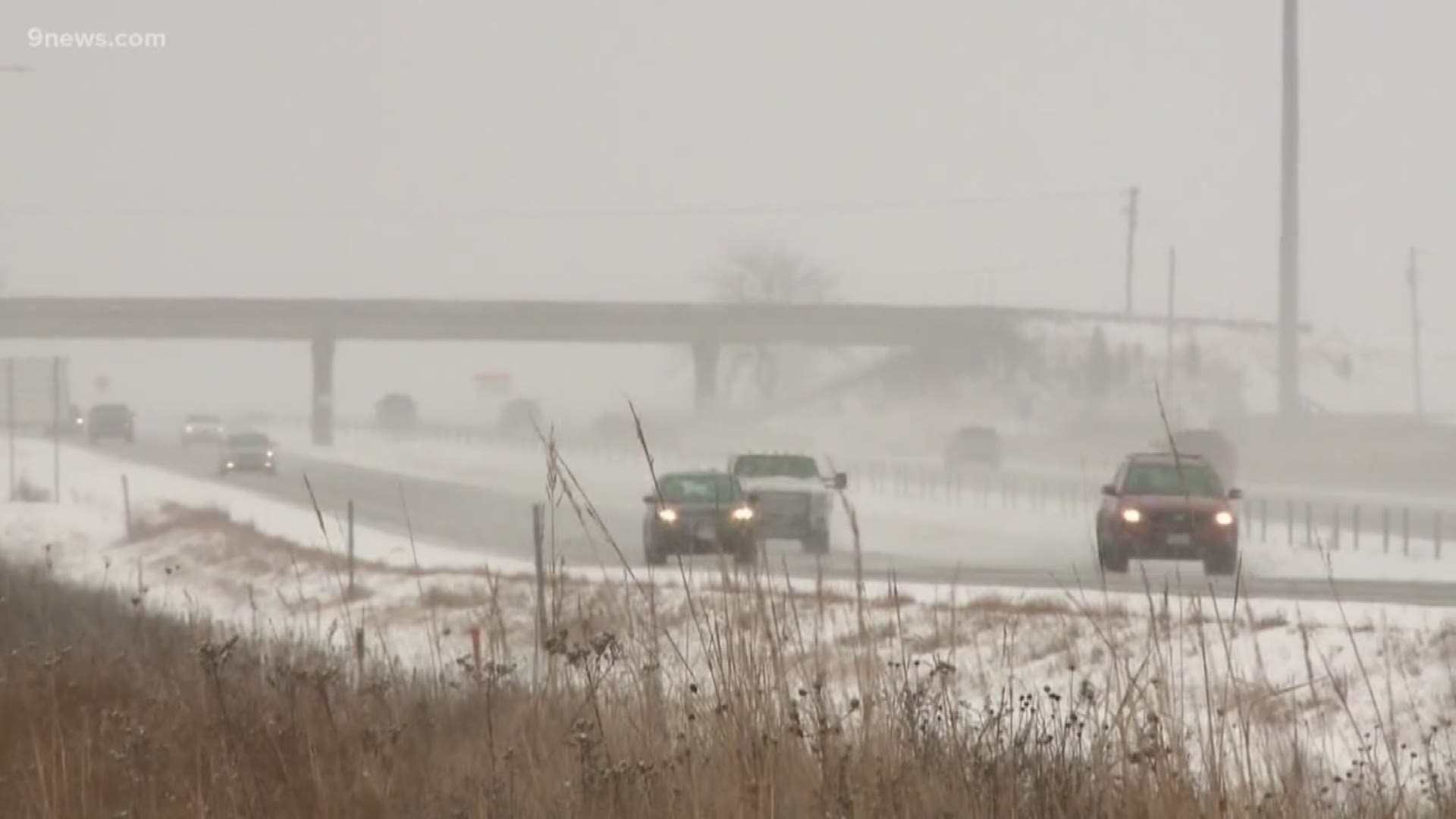 Seattle, where paralyzing snow is fairly rare, got hammered. It saw a February record of 20.2 inches of snow. Nearly all of that fell in a four-day period. 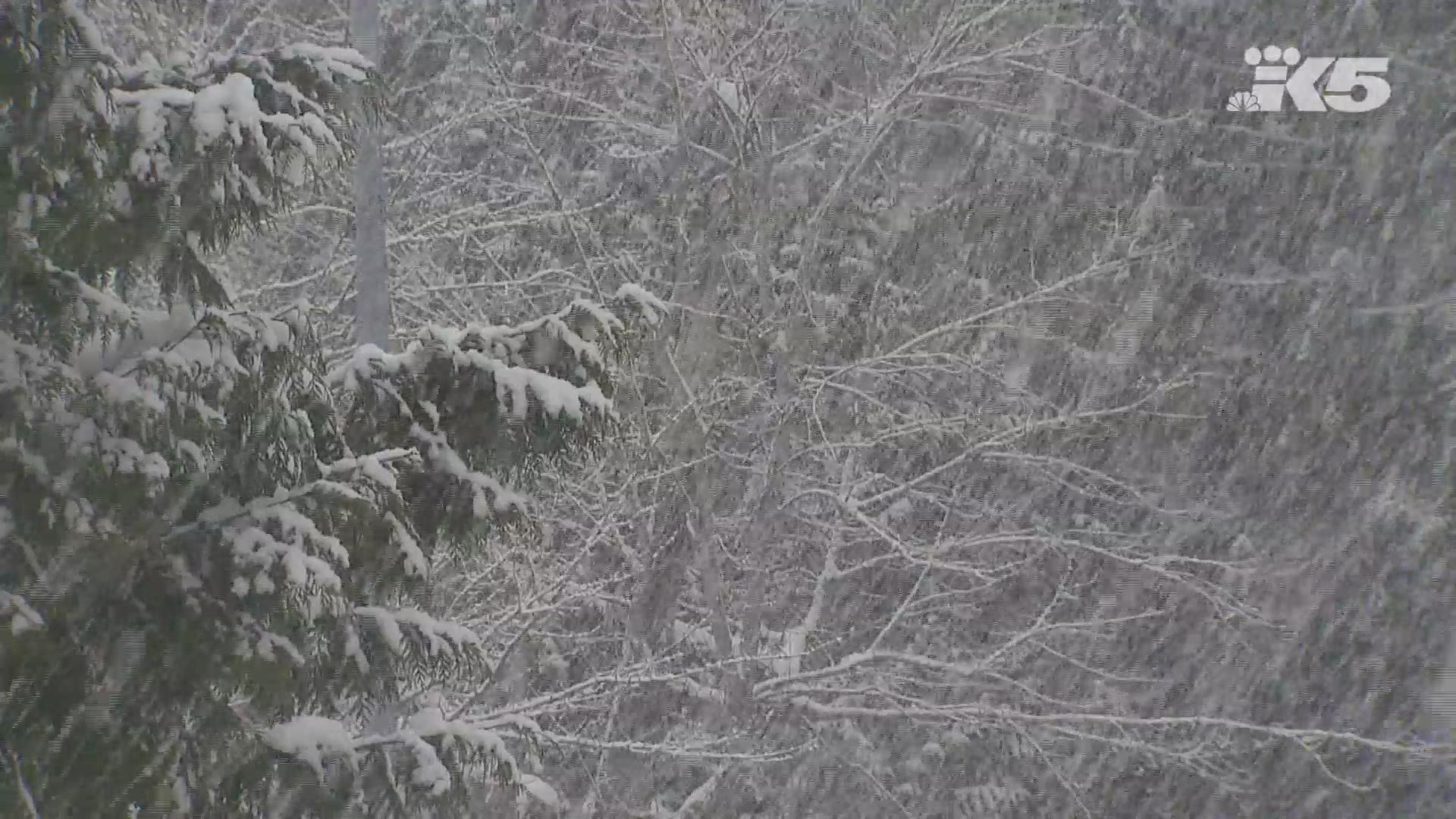 Flagstaff, Arizona, which is more than a mile above sea level, had a single-day record of 35.9 inches on February 21. 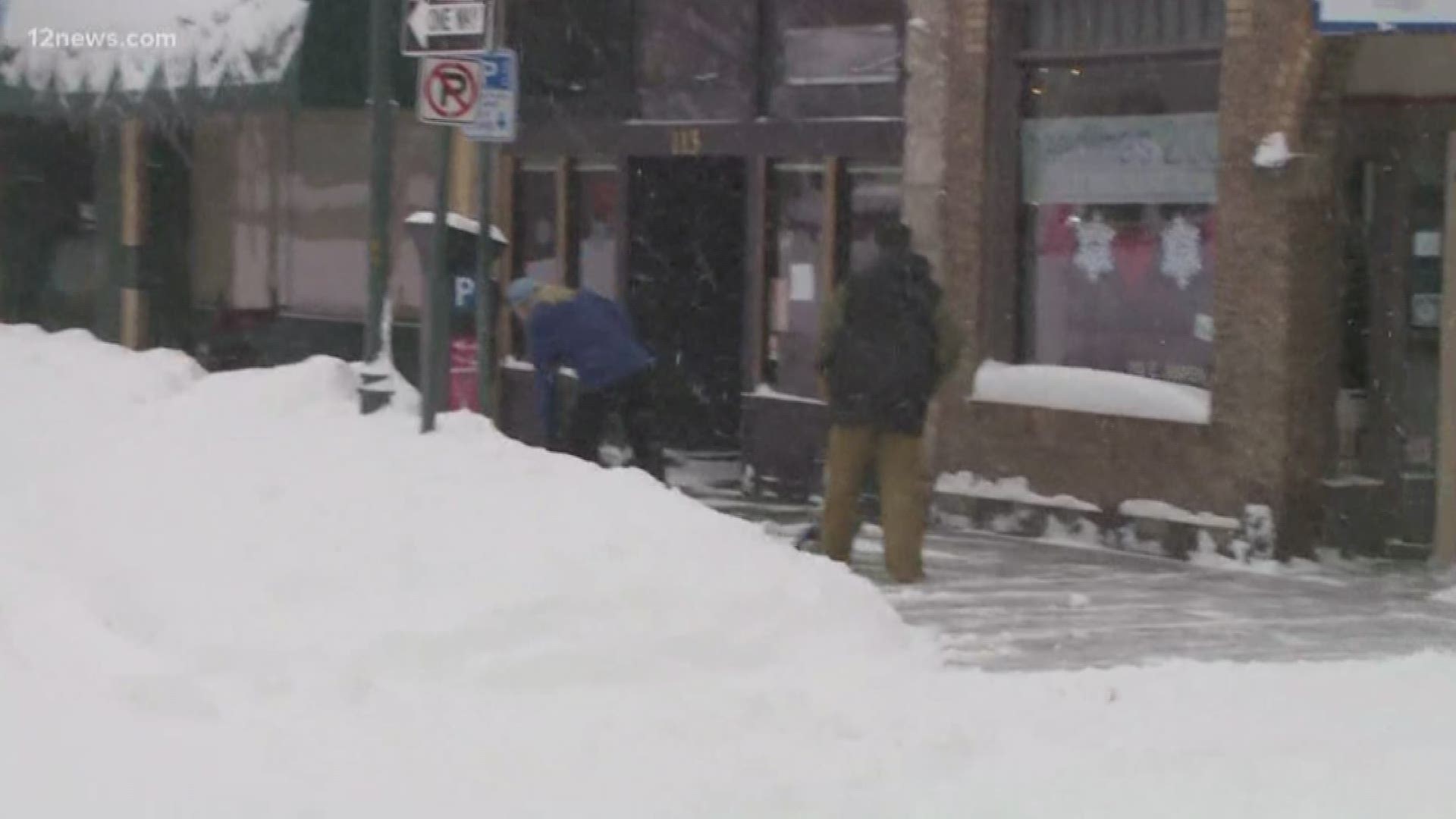 Caribou, Maine had the snowiest winter in the U.S. with 114.2 inches. 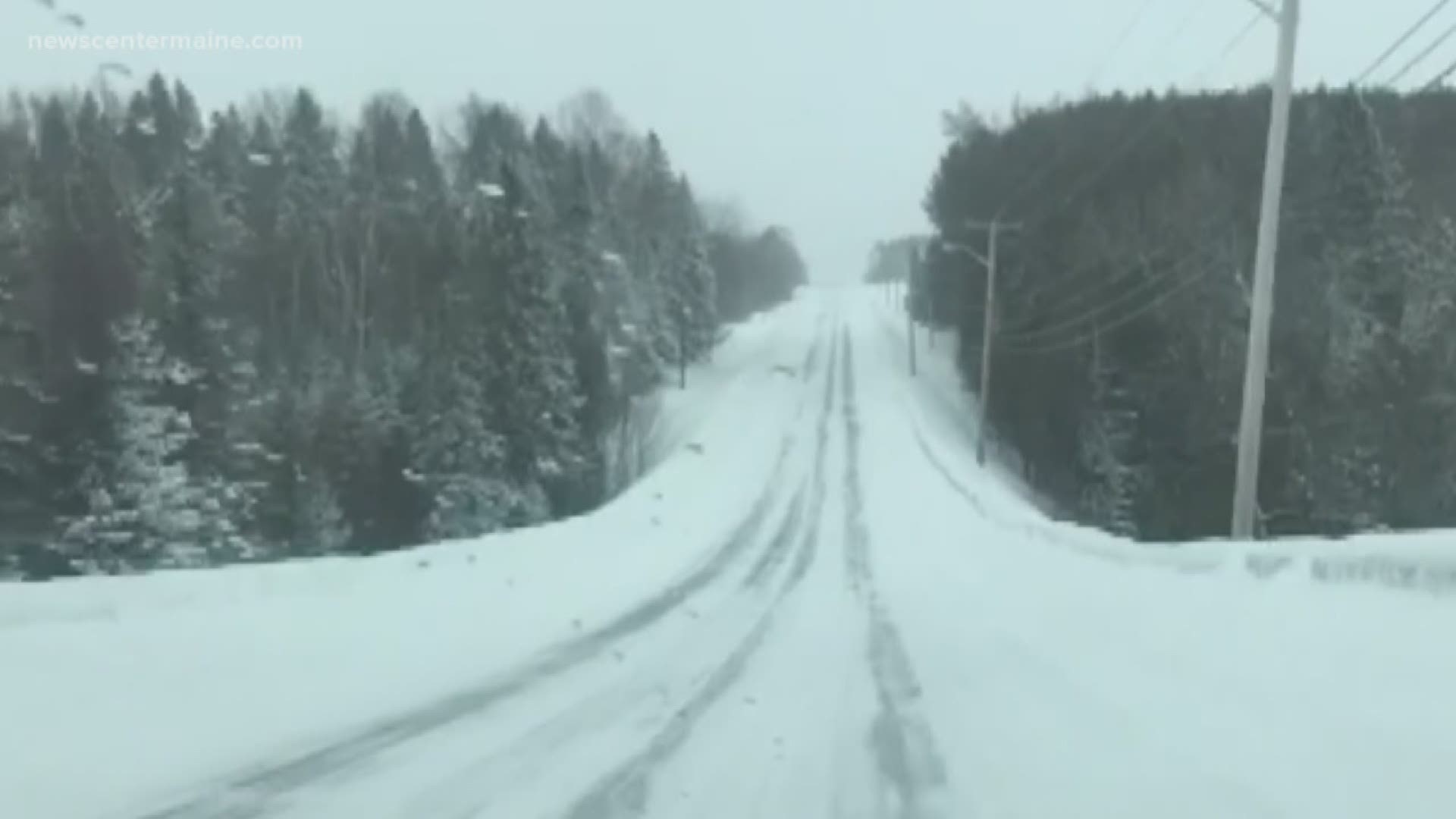 One week after the end of summer, a winter storm slammed some areas of Western states with up to three feet of snow and temperatures that plummeted as much as 30 degrees below normal. But the surprise storm made for some amazing wedding photos for a couple in Spokane, Wash. 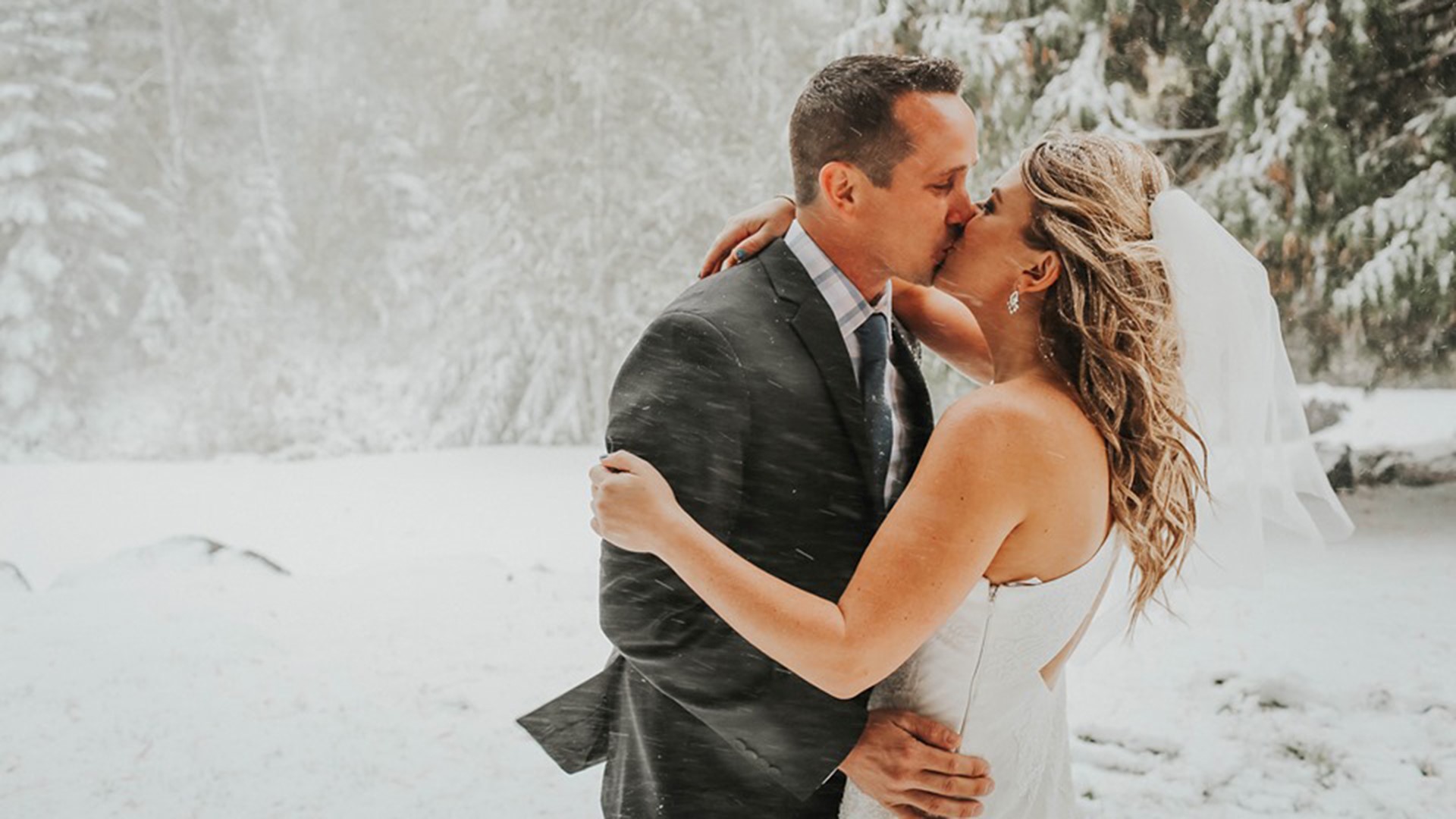 And for a couple who eloped in the Cascades east of Seattle. 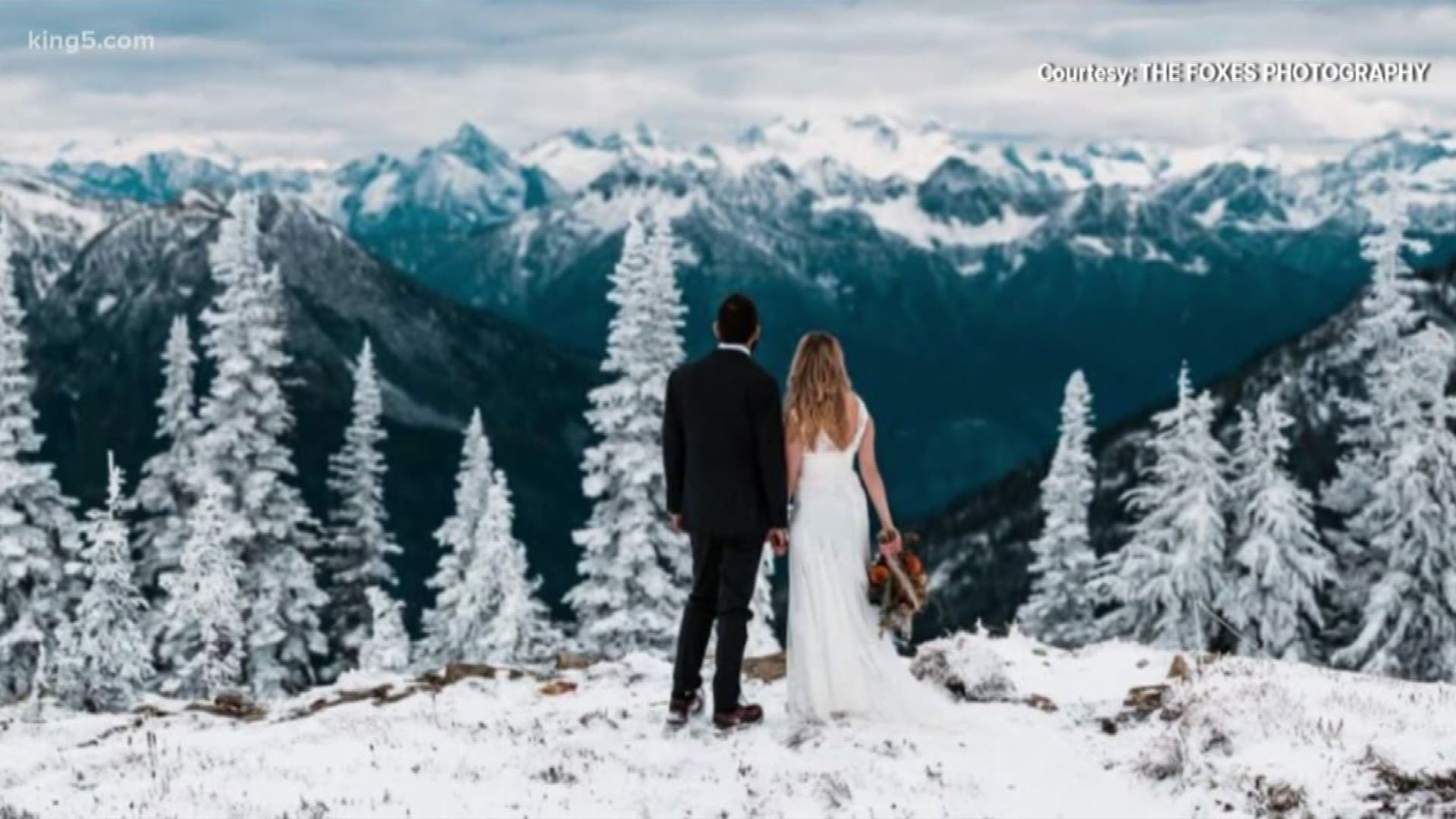 A Midwest snowstorm on Nov. 12 dropped 9.2 inches of snow on Detroit, more than double a 35-year-old record on that same day.

July 2019 was Earth's hottest month in recorded history. The average planet-wide temperature in July was 1.71 degrees Fahrenheit warmer than the average of 56.9 degrees, according to the National Weather Service.

Credit: ASSOCIATED PRESS
Miloud Belhachemi, right, a construction worker who is building a tramway pours a bottle of water on his head, as temperatures soared to 36C (96.8F), in Marseille southern France, Thursday, July 27, 2006. The scorching temperatures have revived memories of the deadly summer of 2003, when 15,000 people in France died from the heat, many of them elderly people left alone while families vacationed. (AP Photo/Claude Paris)

Temperature records across Europe were smashed in July. It moved to Greenland where the heat accelerated the melting of the island's ice sheet and cause massive ice loss in the Arctic. 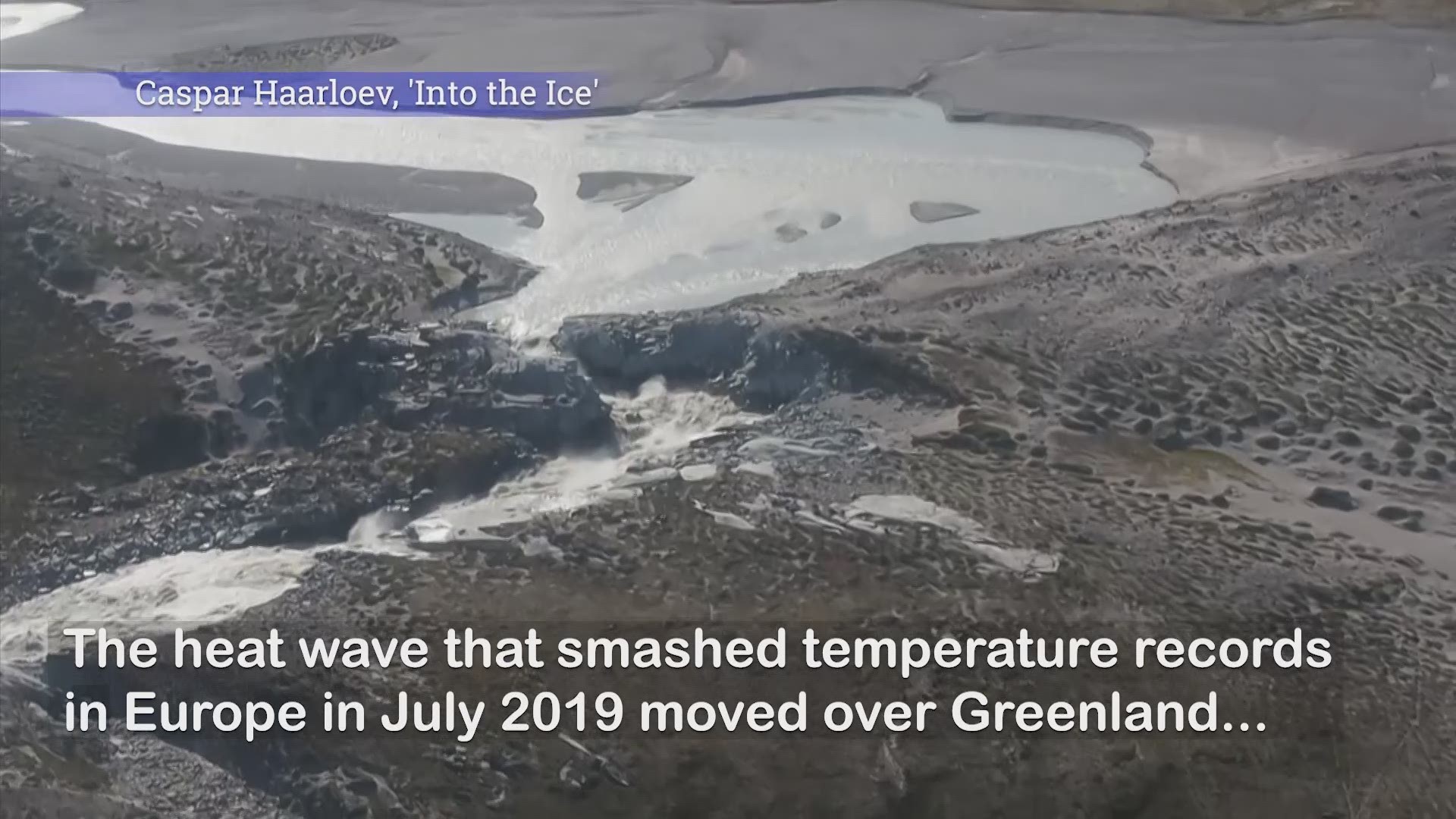 And that was not an anomaly -- it was part of a trend. Scientists said it was the 43rd consecutive July, and the 415th straight month overall, in which the temperature was above the average.  NOAA climate monitoring manager Deke Arndt said the record was “almost entirely due to climate change.”

The World Meteorological Organization said in December that the years from 2015 to 2019 and from 2010 to 2019 “are, respectively, almost certain to be the warmest five-year period and decade on record.”