Woman convicted of voter fraud: 'It really broke me'

FORT WORTH -- A mother convicted of illegally voting, who was subsequently sentenced to eight years behind bars, is speaking out from the confines of the Tarrant County Jail. 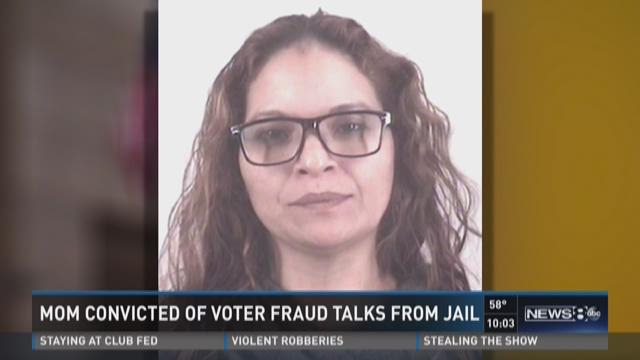 FORT WORTH -- A mother convicted of illegally voting, who was subsequently sentenced to eight years behind bars, is speaking out from the confines of the Tarrant County Jail.

Rosa Ortega, 37, fought back tears on Monday as she defended herself, insisting she simply didn't understand election laws when she voted for Republicans in 2012 and 2014 as a green card holder.

"It was a mistake. I didn't know," said the mother of four. "It was not knowing the difference."

She said she's fully expected to be deported once her sentence is served, which could end up being closer to two years if she gets parole.

"I know if it was another type of person walking in there with the judge, or DA, they would've gotten probation," Ortega said.

The Tarrant County District Attorney's Office strongly pushed back against that assertion Monday night, and said Ortega rejected a plea deal offer over the summer.

At a minimum, statements made in applications to vote should be verified before handing out voter registration cards. In all aspects of society, people verify their identity. Why not for voting? This case shows a clear need to enforce the laws we already have.”

During trial, prosecutors presented evidence that Ortega had illegally voted as far back as 2004, although the conviction centers around two instances from 2012 and 2014 where she illegally registered in Tarrant County and voted Republican.

Governor Greg Abbott tweeted about the ruling on Friday, saying "In Texas you will pay a price for voter fraud."

Her attorney, Clark Birdsall, says they plan to appeal the recent decision. Ortega says she is most worried about her four children, all of whom were born in the U.S. and are citizens.