Two separate outside investigations are underway at the Dallas Independent School District (DISD) after WFAA started asking questions about irregularities within its purchasing department that two former employees discovered. 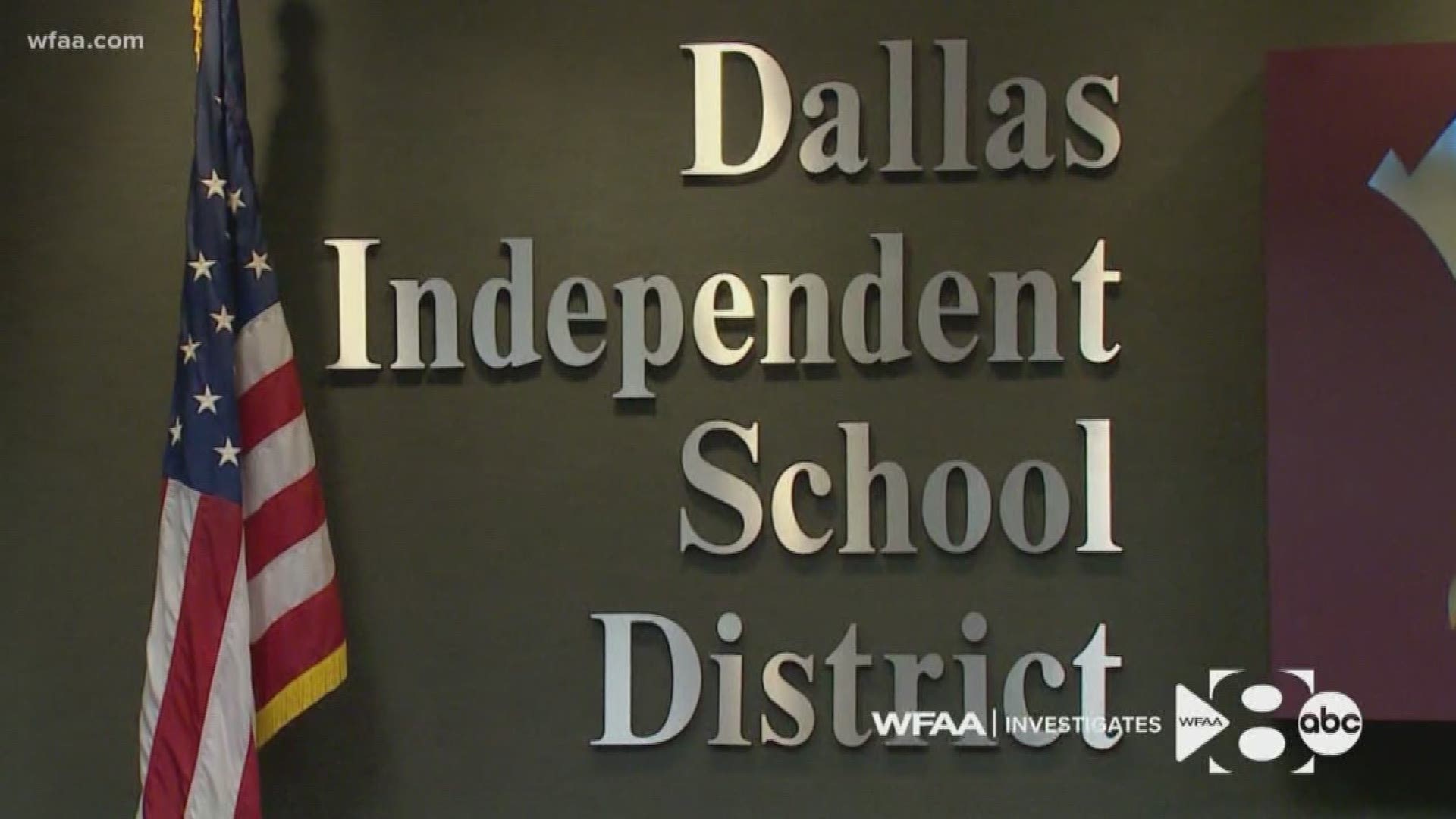 Two separate outside investigations are underway at the Dallas Independent School District (DISD) after WFAA started asking questions about irregularities within its purchasing department that two former employees discovered.

Those questions surround possible criminal violations along with the misuse of taxpayer dollars.

IT ALL STARTS WITH ZACH...

Zach Manning found a house that he hoped to fix up and turn into his dream home.

“It was literally a gift from God when I ran across this house,” Manning told WFAA.

But Manning’s plan to someday retire in the house may have ended when he lost his manager’s job at DISD.

Manning, who oversaw DISD construction and maintenance projects, claimed in a whistleblower lawsuit that he was fired after he notified his supervisors about an unusual pattern of contract awards that often fell just below $500,000.

Required by law and through the district's charter, projects over $500,000 must be put out for public bid.

Manning said that he believed millions of dollars of roof repair contracts were deliberatively structured to evade the need for competitive bids and school board approval.

By avoiding public bids, Manning told WFAA that he feared taxpayers were not getting “the biggest bang for their buck” – possibly costing DISD hundreds of thousands of dollars more.

“It was just an extreme misuse of taxpayer money,” Manning said.

“Basically, my director would dial back numbers if they were 500 thousand (dollars),” Manning said.

Manning alleged in his suit that DISD officials would award “in-house job order contractors and vendors multiple projects that were the same project by separating the projects into two or more projects so they would be under the $500,000 cap.”

Splitting bids or phasing in a large project disguised as smaller different projects - known as “sequential purchasing” - to avoid the competitive bid process is against state law and can carry criminal penalties.

“It was basically a way to fast-track a project,” Manning said. “They (DISD supervisors) considered that to be a hindrance and a waste of time to take that before the board.”

When Manning said he reported his concerns to DISD supervisors, including Superintendent Michael Hinojosa, and the Texas Education Agency (TEA), he said he received a backlash.

“Immediately when I started making complaints about what was going on,” he recalled, “then - all of a sudden - my work product is not what it should be.”

DISD dismissed the concerns Manning raised. After Manning notified the TEA, they cleared his supervisor, Sylvia Pena, saying Pena and other DISD officials “did not intentionally keep (projects) under 500 thousand to avoid procuring through competitive sealed proposals.”

Pena, who has since left the district to work at San Antonio ISD, declined comment by phone, telling WFAA that DISD would need to respond to any allegations of irregular purchases.

Manning's complaints did draw the interest of Andrea Whelan, one of DISD’s top investigators inside the audit department.

Before working with the district, Whelan was with the IRS for 25 years, assisting in tax crime investigations that resulted in hundreds of convictions.

“In my view, there's just rampant corruption that I feel is ignored,” Andrea Whelan told WFAA.

In a 30-page draft report, Whelan said she substantiated concerns raised by Manning – and heard similar concerns about procurement irregularities from other DISD employees.

She also found in her report that projects were “deliberately structured procurements to prevent any purchase order from exceeding $500,000.”

Whelan told WFAA that she recommended her findings of possible criminal violations be turned over to law enforcement, but “that really just fell on deaf ears.”

Not only were Whelan’s concerns not referred to police, but her DISD supervisors also rejected her draft audit.

The draft report never made its way to the DISD audit committee or board members.

Suddenly, Whelan, who retired as Special Agent in Charge for the IRS in Dallas, needed remedial training.

“I was pretty much back to trainee status,” Whelan told WFAA. “I pretty much couldn't walk or chew gum at the same time at that point.”

Despite Whelan submitting a draft of her findings in late 2017, DISD Board members only recently received a five-page consolidated version of her report in August of this year.

The final five-page report was released by Mike Singleton, who has since retired, in mid-August.

When shown the final report, Whelan said the report was a diluted and inaccurate version of what she had uncovered.

“Yes, I believe it’s a cover-up,” she said after reviewing the recently released final report.

“It (draft report) wasn't just something that I imagined out of my head—every fact in my report was supported by evidence that was hyperlinked to the report,” Whelan said. “I mean what can you think: They wanted to cover it up.”

However, according to the report, the district hired a private law firm that could not determine if the purchases were “unallowable or inappropriate.”

Something Whelan says authorities could have determined if they were notified.

“The individuals that held primary responsibility for the questioned transactions are no longer employed with the district,” the report said.

As a result, the report said the district has been “hindered in our ability to determine a definite cause” for the procurement concerns.

When reached for comment, DISD Superintendent Michael Hinojosa said none of Whelan’s findings ever made it to him.

“I've been made aware of none of that information,” Hinojosa told WFAA during an interview.

Yet, Hinojosa told WFAA he has ordered an outside counsel to review the procurement concerns, but maintained that the district is not mishandling taxpayer money.

“It is our policy to be good stewards of taxpayer dollars, and we've proven that over and over we have no material deficiencies on our audits in the last 4 years,” Hinojosa said.

“And so we continue to be good stewards. If there is a problem we will identify it. We will self-report it, and we will take care of the matter.”

DISD Audit Committee members also told WFAA that they have plans to hire outside counsel to review internal processes in the audit department, though would not reveal specific concerns.

The decision to hire outside counsel came after an emergency audit meeting was held days after WFAA interviewed Hinojosa about Whelan's report.

Audit committee members say that the meeting was sparked by an anonymous complaint made through the district's tip line regarding what Whelan found.

“They (DISD) are abusing taxpayer money and they are ruining the lives of people like Mr. Manning who simply tried to blow the whistle and say you can’t do this,” said Shipp, who represents Manning and Whelan with his company Brett Shipp Media.

“Everything he (Manning) said, everything he warned them about was absolutely correct according to an internal audit,” Shipp added. “What happened to that audit? It disappeared.”

And what happened to Manning’s whistleblower lawsuit?

The suit ultimately was dismissed. Manning told WFAA he was unaware of Whelan’s draft audit report at the time.