The Austin business got Gov. Greg Abbott involved on the prank. The restaurant eventually revealed this was a part of an elaborate announcement for new swag. 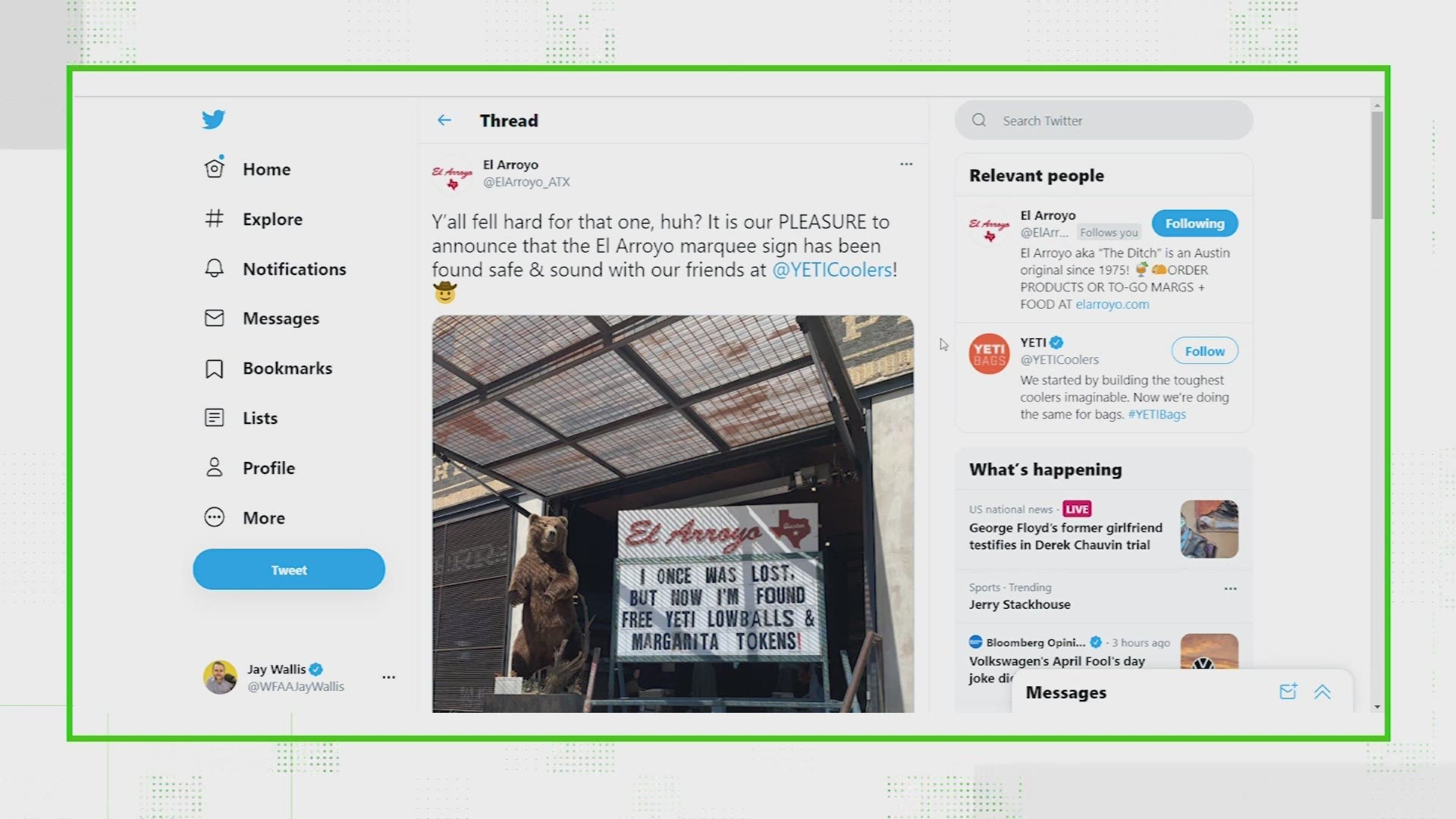 AUSTIN, Texas — THE QUESTION: Did somebody steal the El Arroyo's sign in front of the Austin restaurant?

OUR SOURCES: The Tex-Mex restaurant El Arroyo. The business has been open for more than 25 years on the corner of West 5th and Campbell St. in Austin. The restaurant is known for its famous marquee that will have clever sayings and phrases on it, usually related to topical issues going on in Austin, Texas or the country.

That ship has sailed 🚢 pic.twitter.com/QJa2GsNEZA

Then right before 11:00 a.m., El Arroyo sent out another Tweet, this time with pictures that look like screengrabs from a surveillance camera outside the restaurant.

In the photos, it looks as if a group of people is stealing the sign in the middle of the night.

Some Twitter users did notice the time stamp at the bottom of the images has a date of "03-31-21," meaning that video would have actually been from overnight Wednesday rather than Thursday on April Fool's Day, if the crime were legitimate.

A little more than an hour after the surveillance camera photos, then El Arroyo Tweeted out a video from Gov. Greg Abbott. He was asking people to help find the sign and saying the Texas Department of Public Safety would help as well.

A message from @GregAbbott_TX pic.twitter.com/EjAk1NAWTs

This elaborate prank came to an end around 1:30, when El Arroyo Tweeted that the sign had been found at the nearby YETI store in Austin.

The sign read, "I once was lost, but now I'm found. Free YWTI lowballs & margarita tokens!"

El Arroyo Tweeted that the Austin business had partnered with YETI to give away 200 El Arroyo engraved lowball tumblers along with some margarita tokens redeemable at the restaurant.

The tumblers will be available to purchase at the restaurant for a limited time.