Texans have spent $7 billion on massive transmission lines that bring wind energy from West Texas to Dallas-Fort Worth, Houston, San Antonio and Austin. 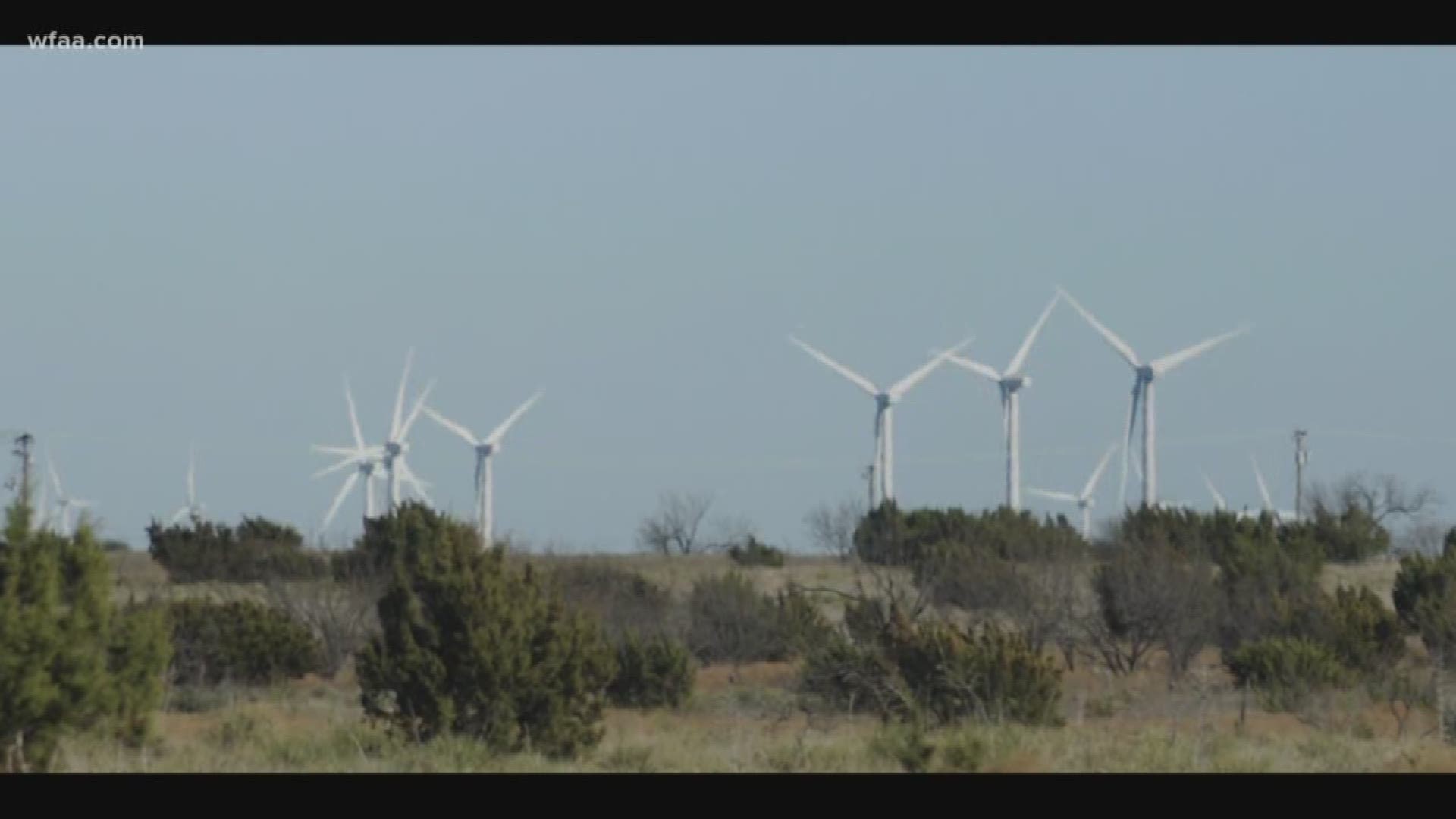 SWEETWATER, Texas — The empty spaces of West Texas tell a story few people know and many wouldn't believe. In a state where many conservative politicians reject the science of climate change, somehow Texas ended up leading the way on green energy.

How did that happen?

Fifteen years ago, the Texas legislature approved what would become a $7 billion plan to support wind energy. The big sell was not that this would be good for the environment. It was that if Texas supported wind power, it would be good for business.

I want to verify if that happened.

The first promise about Texas supporting wind energy was that it would stimulate rural economic growth.

That's why I went to meet up with Bart Grimes. He's a safety manager at Wind Energy Turbine Services in Sweetwater, Texas that services wind turbines. Grimes is showing the inside of a turbine, where there’s a 250-foot ladder that leads straight to the top.

“Do people ever get freaked out?” I asked him.

“The hardest part of the job is getting on that ladder and going up,” he said.

In Texas, the wind blows hardest in the West side of the state. But most people live in the central and eastern parts. So, Texas built 3,600 miles of electric transmission lines to carry power out of the most remote parts of the state.

The legislature called it Competitive Renewable Energy Zones. It’s paid for with a monthly $5 fee in everyone’s electric bill. After Texas guaranteed the lines would be built, private investment in turbines exploded.

The wind industry says it now supports 25,000 Texas jobs, many of them highly skilled.

“I live in a rural area and there's just no jobs if it weren't for the wind,” Grimes said.

“And we all know how the oil field is. It's here. It's a boom. Here one day, gone the next. Since I've been working in the wind industry, going on five years, I've never been laid off one time and never been sent home because of the lack of work. It's a steady work,” he said.

Sweetwater is the county seat of Nolan County. Before wind, the tax base here was about $700 million. After wind, the Sweetwater Economic Development Corporation says the tax base is $3.2 billion. Those dollars have helped build new school buildings and a new county jail.

“Renewable energy is a huge growth industry. Also, there are no emissions from the wind. How much do you really care about those things? Does it matter to you?” I asked Grimes.

“No. It really doesn't. I want a job and I want stability. And this is what I got. I make a good living. And I'm able to provide for my family. That's what's important,” he added.

The second promise of the Texas plan was that adding more wind would lower the overall price of electricity.

So, that's why I'm in Arlington now; to get a tour of the General Motors Assembly Plant with Rob Threlkeld. He's GM's global manager for sustainable energy.

“What is GM's position on climate change?” I asked Threlkeld.

“We recognize climate change. We look at renewables as key way for us to reduce our carbon footprint,” he said.

“What has happened to the cost of electricity since we were able to get that wind in from West Texas?” I asked.

“You've seen your cost of electricity go down. Wind energy is cheap. Generation sources are cheap. Solar is coming on big here in Texas as well. So really, you're seeing a decrease in prices, overall,” he said.

As Texas has produced more wind and the price of natural gas has fallen, electricity prices in Texas have gone down. According to the United States Energy Information Administration, overall electric prices in Texas are down 7% since 2005, while they’re up 29% for the rest of the country.

GM has a 100% renewable energy goal. So do Facebook, Google and Walmart. It's big companies that are driving demand for cheap, clean wind power.

“Do you think the free market could have done this on its own?  Created a scenario where you could get all that wind, buy it and power this whole place with it,” I asked Threlkeld.

“No, it is a balanced strategy between policy and the free market to really allow this to happen,” he said.

What wasn't promised with the Texas plan, were lower carbon dioxide emissions that contribute to climate change. But that also happened.

“Is climate change an important consideration when it comes to, 'That was a success'?” I asked King.

But in this case, Texas' pro-business climate was also good for the actual climate.

According to the American Wind Energy Association, wind energy helped Texas remove carbon emissions that are the equivalent of taking 11.5 million vehicles off the road.

“If government gets out of the way, provides opportunity, the free market is always going to create ways to do things. And that's exactly what happened with the wind energy market in West Texas,” King said.

So, 15 years ago, the Texas legislature got behind wind power in a big way.

Back then the state’s energy mix was about 3% wind. Today it’s 20% wind. That’s far more than any other state. And if Texas were a country, it would be the 5th largest producer of wind energy in the world.

So was the investment in wind energy good for Texas? Clearly, it was. Rural economies flourished, electric rates fell and carbon emissions dropped.

Got something you want verified? Send me an email at david@verifytv.com.