Verify: Are there more tigers in Texas than in the wild?

If the Humane Society is right and there are more tigers in Texas than in the wild, let's start by finding out what's up with tigers in the wild? 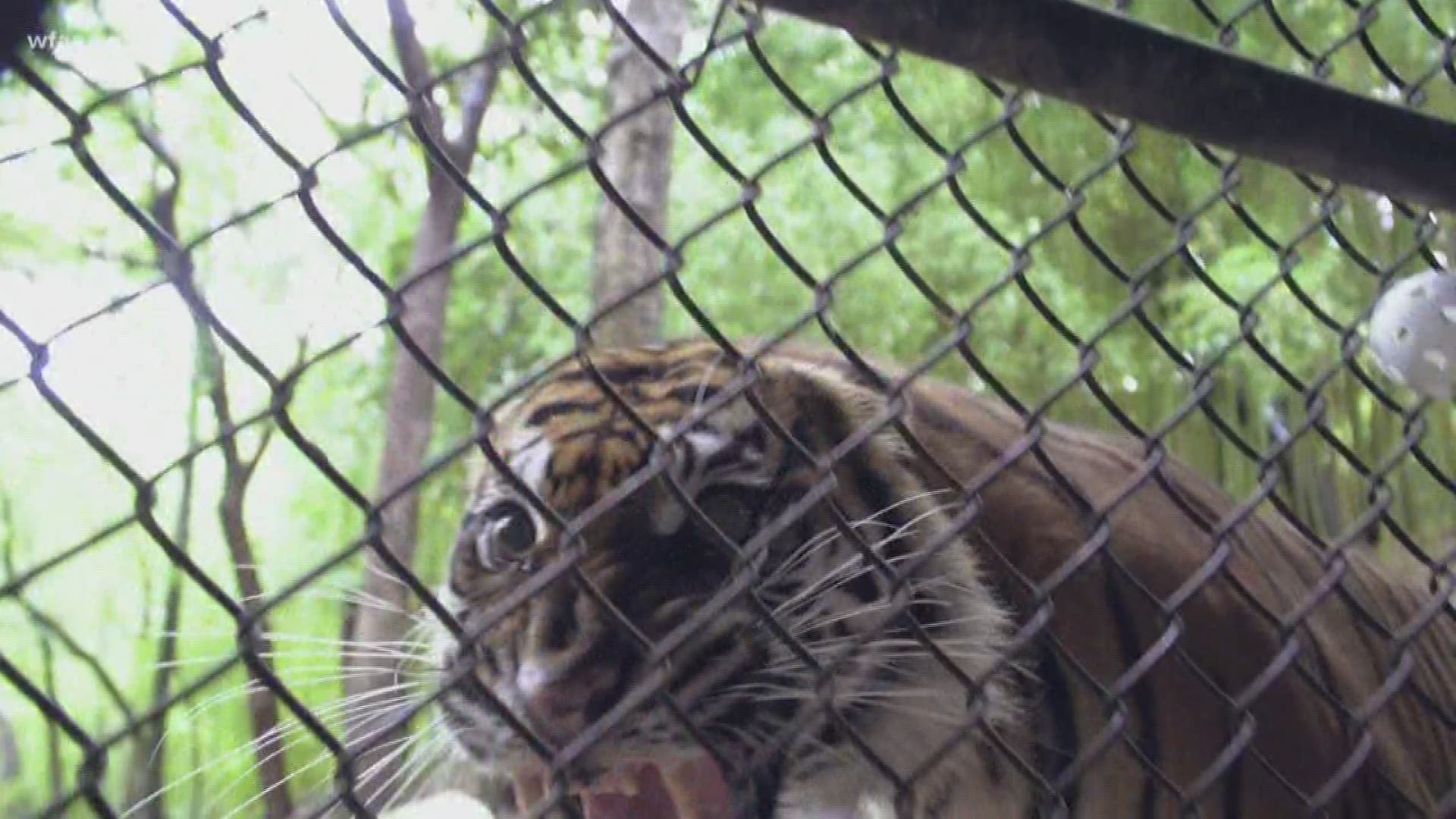 Texas is a national leader in a lot of obvious ways like energy, technology and construction. But have you ever heard there are more tigers in Texas than in the wild? Sounds crazy enough that I needed to verify it.

I first read that claim in a new book by Pulitzer Prize winning author Lawrence Wright in his new book “God Save Texas. Here’s what he wrote: “The Humane Society of the United States estimates there are more tigers living in captivity, in Texas, then the 3000 that are thought to be living in the wild.”

TIGERS IN THE WILD

If the Humane Society is right and there are more tigers in Texas then in the wild, let's start by finding out what's up with tigers in the wild? So, I’m going to the Dallas Zoo to talk to Keith Zdrojewski, Carnivore Curator. The zoo cares for 5 Sumatran tigers.

When I get there, he’s letting me help hide meat inside the empty tiger habitat. Searching for food, he says, is a good way to engage tigers.

“It would be too easy to take this meat out there and drop it in one spot. They'd go and eat it and take a nap. Our goal is to get them engaged in exercise, searching, managing their time, so they have more going in their life then eating and sleeping,” Keith tells me.

OK, so how many tigers are there in the wild? This 2016 report from the World Wildlife Fund and the Global Tiger Forum found there are 3890 tigers in the wild. That makes tigers an endangered species.

“I'm reading that there are more tigers in Texas then there are in the wild. Go Texas, right?” I say to Keith.

“That's probably not a good thing. For breeding purposes, there's a lot of cross-breeding or in-breeding between them. So, you can have different species of tigers that are breeding together. That's not good, that's not saving the genetics. Or you can have in-breeding, which isn't monitored. One of the things that zoos do is we're trying to keep the species as specific as possible,” he says.

And zoos can work to prevent extinction. In Asia, where they live, wild tigers are hunted by poachers, their parts are used as ingredients in traditional medicines. And, according to the WWF, 93% of tiger habitat has been destroyed.

TIGERS IN THE TEXAS

So, we know there are almost 4000 tigers in the wild and they're endangered. Are there more than that in Texas, like the Humane Society says?

To find out more, I'm at the Black Beauty Ranch, in Murchison, affiliated with the Humane Society of the United States. They have 3 tigers, rescued from abusive conditions.

“They have the highest quality of life that we could possibly provide,” says Katie Jarl, the Texas Director of the Humane Society.

In press releases, like this one, she has said: "There may be more tigers in the Lone Star State than remain in the wild in Asia."

“How did you come up with that number?” I ask.

“I'm not sure where we came up with that number. And I wouldn't say it's completely accurate, but there's no way we can confirm it. The reason being there is no database of tigers in the state of Texas,” Katie says.

What can we confirm? There isn't much research in this space, but this frequently-cited paper was published in 2005 by the Feline Conservation Federation. It estimates 4692 tigers in the country. So, that's more than the 3890 estimated to be in the wild.

in 2016, from Feline Conservation released state-by-state numbers, including 399 tigers in Texas.

“No, there's no way to know. No database where we collect info on where these tigers exist,” she says.

So, the Humane Society can't back up that claim. But in Texas, anyone can own a tiger and they believe the number is much higher than 399. They want lawmakers to outlaw private ownership.

“The tigers here are here because someone was irresponsible. So, we had to step in and take care of them,” Katie added.

This problem is bigger than three rescued tigers. It takes a statewide network of big cat sanctuaries to deal with a flood of mistreated, abandoned and abused tigers. That’s what I’m learning on a visit to In-Sync Exotics in Wylie.

“How many tigers are out here total?” I ask Angela Culver, the media coordinator here.

“That's a lot of tigers. All of them are rescues from one situation or another,” Angela tells me.

The last tiger they took in was found by border patrol agents.

“There were three guys carrying him in a duffel bag to the United States probably to sell to the highest bidder,” she says. “They open the bag there's a tiger, he’s dehydrated, lethargic, he's not doing well,” Angela says.

That tiger’s name is Kanobi and In-Sync is his permanent home now. Over the years, Angela says they’ve sheltered over 300 big cats.

“What does it cost to care for these cats?” I ask.

“Would you like this whole thing to be gone?” I ask.

So, are there more tigers in Texas, than in the wild? It sounded crazy, but there's no evidence that it's true. What I really learned is things are bleak for tigers whether in Texas or in the wid.