This is the 19th year of TCU's Community Scholars Program, giving hundreds a chance to attend one of the most expensive schools in the country - absolutely free. 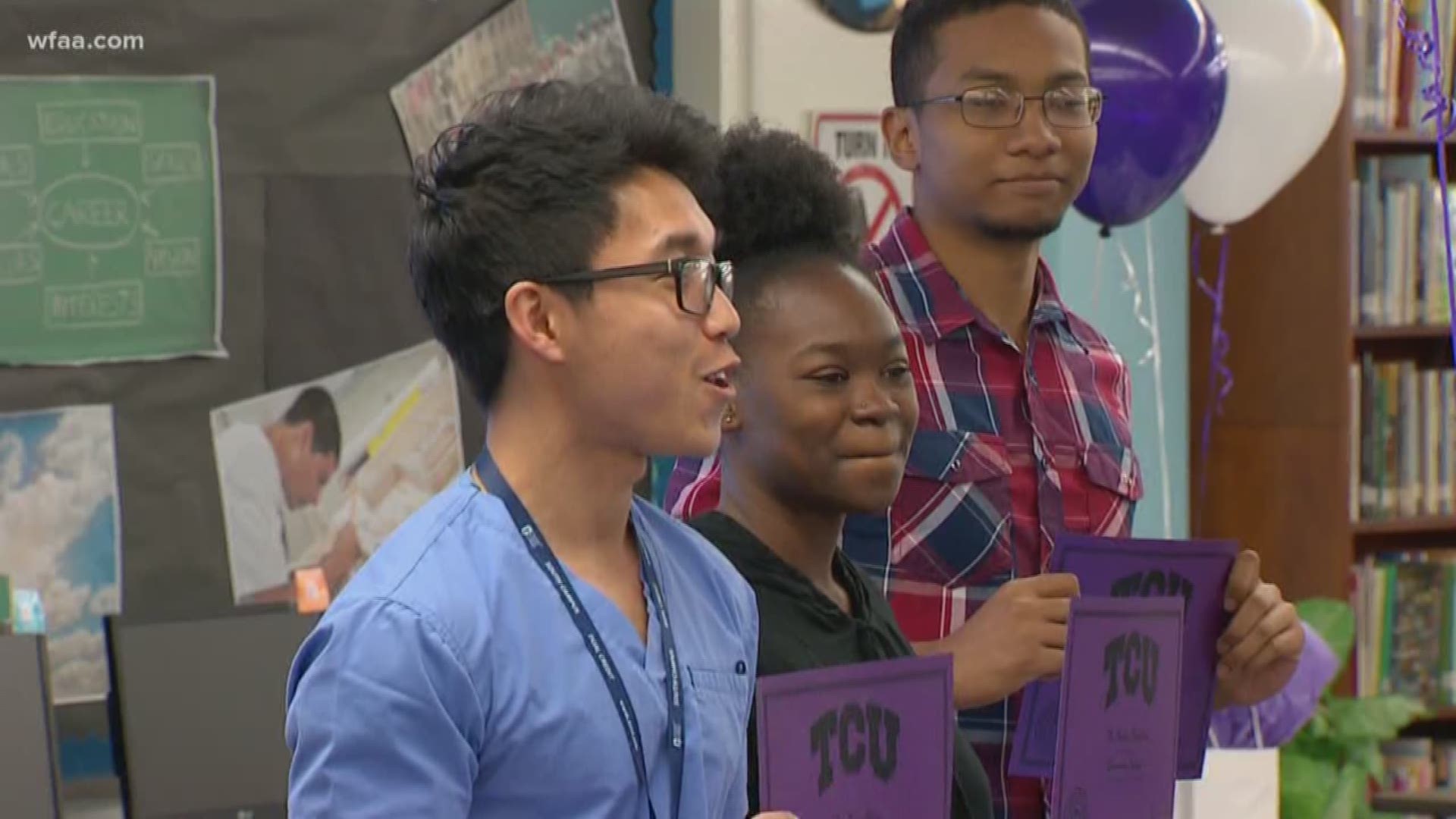 FORT WORTH, Texas — By the end of this week TCU will have offered full-ride scholarships to 50 DFW-area high school students to attend the university beginning this fall. And with each surprise announcement at 13 urban, high-minority public high schools this week, tears fell and American dreams began to come true.

This is the 19th year of the TCU Community Scholars Program. More than 200 high school students have received the scholarships, this year at an estimated value of more than $260,000 each for a four-year undergraduate degree.

"I'm just as excited to be here," said Community Scholars Program director Timeka Gordon as she prepared to make the announcement to five students at O.D. Wyatt High School in Fort Worth, the second of three Fort Worth ISD schools the TCU representatives visited on Wednesday.

O.D. Wyatt's TCU Community Scholars, chosen through a rigorous application process and thorough assessment of student performance, were Yilika Loufoua, originally from Thailand; twin brothers Thein and Hein Aung, who came to the U.S. just three years ago from Malaysia; Claudia Nemailem, originally from Chad, who came to the U.S. to live with her grandmother; and first-generation American Maria Villalba, fourth in her high school graduating class.

"For them to realize that they brought me here and I'm offered this opportunity it's amazing," said Nemailem, whose older sister also received the same scholarship in a previous year.

In the high school library, decorated with purple and white balloons, and with the five students seated together at a long table, TCU representatives presented them with scholarship acceptance letters to sign. Technically, they had until May 1st to decide if they wanted to accept the full ride to TCU. Each of them signed it — immediately.

And for Villalba, whose parents came to the United States more than 20 years ago, the scholarship has special meaning. Her dad Luis works in construction. Fourteen years ago he was part of a construction crew that helped build a dorm on the TCU campus — a dorm he couldn't possibly afford for his own daughter.

He was obviously emotional during the ceremony as he watched his daughter receive her scholarship. I asked him, during our interview, why he wasn't crying anymore.

"I can see his emotions through his eyes," his daughter Maria said. "I know it's making him really happy and that was my goal to make my parents proud. Knowing that they saw the hard work that I put into it makes me really happy."

Maria plans to pursue a career in health administration. Nemailem wants to become a traveling nurse. The Aung brothers will both pursue degrees in biology. Loufoua hopes to become a mechanical engineer. Now, at a top-flight university with an estimated annual cost of attendance of more than $60,000, they have their chance.

O.D. Wyatt was the 10th high school the TCU Community Scholars team visited this week. Three more schools, and several more students in both Fort Worth and Arlington, will get the same life-changing surprise before the week is over.