Stronger together: 18 years on, this Fort Worth interfaith group is still meeting to celebrate their similarities

“I’m a better person because of my friends from the Jewish and Christian faith,” said Dina Malki Alhussayni, a member of the Daughters of Abraham. 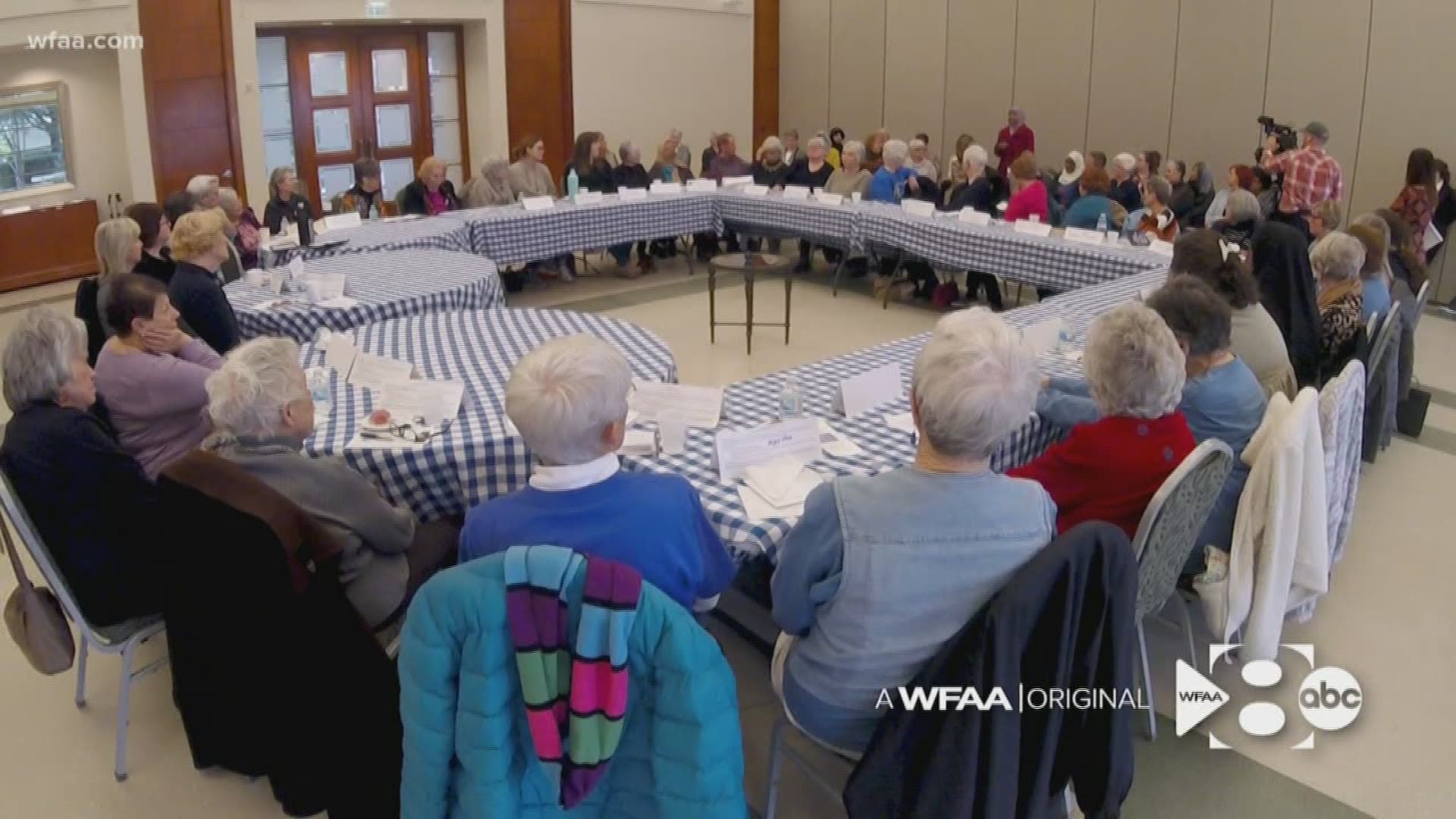 “So good to see you,” said Janice Harris Lord to every woman who walked in the door. A bright smile and big hug accompanied every warm hello.

And as she called her meeting to order, Lord realized her group had almost outgrown its location.

“Holy cow, we need more chairs!” she said to the standing-room-only crowd of 65 women of all races and ages.

Each month they meet in a different place. This time they gathered in a synagogue in Fort Worth.

Faith drew them to that house of worship – just not their own faith.

They call themselves the Daughters of Abraham. Judaism, Christianity and Islam are called the Abrahamic faiths, as they trace their roots to Abraham.

When they come together monthly, the goal is not to debate differences, but to share common struggles.

“You never feel threatened, you never feel like anybody is going to judge what you say,” said Pat Brown, who is Catholic.

No one preaches about what each faith believes, Lord said. They pick a topic and discuss.

Debra Friedman Dayton, who is Jewish, led a roundtable discussion at the synagogue. They talked about why young people stray from religion, and what they, as mothers, are doing to try to keep their children excited about their faiths.

“Not being accepted at church is really big,” said one woman who told the group that her children are frustrated by a lack of acceptance of the LGBTQ community. “When they see this incongruence between love your neighbor except ‘them,’ they say, ‘I don’t want any part of that. If you can’t love me and my friends and who they are, then I don’t want to be with you.’”

She choked up as she added that her daughter stays in church “because she wants to help change some of the attitudes of some of my generation.”

The woman sitting next to her wiped a tear as she said she feels the same struggle.

“I feel like I can’t be a part of the conversation if I leave the church, right?” she asked. “I could go fight it elsewhere with people who are like-minded and just live in an echo chamber, but I don’t want to do that. I can only live my faith and teach [my children] by example.”

The Daughters of Abraham launched shortly after the attacks of September 11, 2001.

“Like many, I was totally overwhelmed and kept having this nudging inside me saying ‘Do something!’ But I’d talk myself right out of it. What’s one little woman in Arlington, Texas able to do?” Lord said.

But in January of 2002, she decided she couldn’t ignore that nudging anymore. She reached out to a rabbi and an imam in Tarrant County.

“The idea was that if we can move from tolerance — which is a word I don’t care that much about, but that’s where you start — if we can move from tolerance to respect to genuinely loving one another as sisters without getting discombobulated over our differences but focusing on similarities, maybe there’s hope for world peace,” Lord said with a smile.

“I frankly started with women because it didn’t seem like men had done a good job with world leadership and peace,” she added, laughing.

Seventeen years after that first gathering, the Daughters of Abraham is larger than Lord ever dreamed.

“Little by little we really believe those little seeds get planted and change comes,” Lord said, with another smile.

“We’re all human beings, so we’re supposed to be kind to each other,” Dayton said.  “It’s very inspiring to come and see each faith tradition and their members and learn what they have in common with my faith tradition.

"Their experiences are very similar to my experience. I always feel lifted up when I leave. I feel happier.”

She sat on a couch between Pat Brown, and Dina Malki Alhussayni, who was wearing a headscarf, known in the Muslim faith as a hijab.

Alhussayni said she had never met a Jewish person until attending a Daughters of Abraham event.

Now she and Dayton have been to each other’s homes, and – though it’s been a while – they meet for lunch.

Alhussayni said political problems in the Middle East caused her to have preconceived conceptions about other religions. Daughters of Abraham taught her those preconceptions aren’t right.

“When I come here, you look at the person and you see a human in front of you,” she said, “and from fellow humans you become friends, sisters, companions. I’m a better person because of my friends from the Jewish and Christian faith.”

How they dress and worship is vastly different, but they’ve realized the common foundation of each faith is love.

“My prayer, above all, is that worldwide these good, kind compassionate people can come together in small circles or big circles and do the right thing. It’s a time for hope worldwide,” Lord said.

World peace hasn’t happened, but there is a little more peace in each of their worlds.