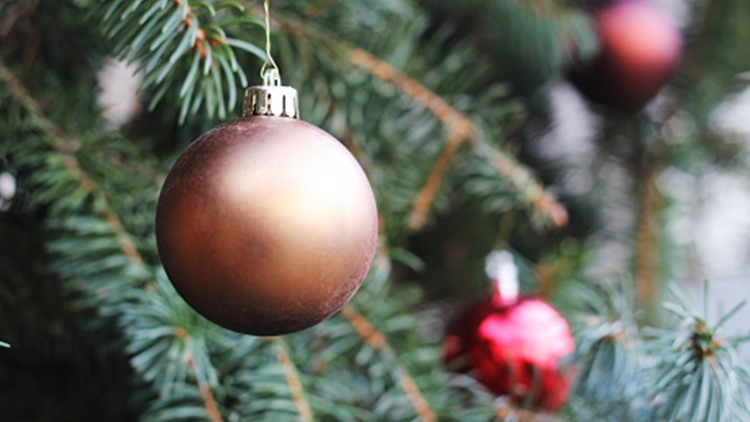 From Mariah to the Muppets, reggae to Rudolph, here are WFAA's favorite Christmas songs

It's December, which means it's time for Christmas music. Whether you're excited about hearing those holiday tunes all day on the radio or you'd rather celebrate in a more non-traditional way, there's no denying that the songs are inescapable this time of year.

We at WFAA decided to take a newsroom poll on everyone's favorite holiday songs and got quite a few answers.

Looking for more holiday news? Check out our Holiday section.

Some fun stats about our discussion: "Jingle Bell Rock" came up multiple times as an answer, as did "Sleigh Ride" and "Christmas Is the Time To Say I Love You." Mariah Carey's "All I Want For Christmas Is You" was the first song suggested right out of the gate. Read on to see what some WFAA team members had to say about their favorite holiday songs. Check out a massive playlist of our selections below.

Alix Comings, producer: "'All I Want For Christmas Is You.' Because it's everything."

Cynthia Izaguirre, anchor: "Many people will make fun of me, but I must be honest: It's 'Same Old Lang Syne' by Dan Fogelberg. No reason for liking it other than I look forward to hearing it on the radio every Christmas."

Matt Howerton, reporter: "Iconically lip-synced by Kevin McAllister in 'Home Alone,' my choice is 'White Christmas' by The Drifters. That movie was on 24/7 in the Howerton house in December. Always reminds me that it’s the holidays.”

"Modern? 'Sleigh Ride.' I've performed it so many times I think I could play my part in my sleep, and it still never gets old. I just love when the horse whinnies at the end!

"From a movie? 'Bless Us All' from 'The Muppet Christmas Carol.' It's got some beautiful lyrics that are relevant all through the year about family being the most important thing and being happy with the simple things in life.

"Album? 'He is Christmas' by Take 6. There is more to a capella than Pentatonix, people! This album has been around since the '90s, but is always in heavy rotation for me during the holidays. It is super strong all the way through, but their take on 'Twas the Night Before Christmas' is just delightful."

Rebecca Lopez, reporter: "I have two. 'Mary, Did You Know?' by Kenny Rogers and Wynonna Judd, and a fun Christmas song called 'We Need a Little Christmas.'"

William Bryant, photographer: "'Christmas Is the Time To Say I Love You,' by Billy Squier."

Jesse Hawila, meteorologist: "My favorite is Ella Fitzgerald’s version of 'Sleigh Ride.' We used to play it when I was a kid all the time. Her voice and rhythm make it extra special. I also just love the the picture the song paints in my mind."

Editor's note: Doug has a lot of favorite Christmas songs.

"'Christmas Wrapping' by The Waitresses is the first non-traditional Christmas song I ever fell in love with. It feels like being young and spending your first Christmas away from your family. It’s ultimately positive, and has a good story that continues until the end. I love that it never feels cheesy or sappy, but it has tons of Christmas spirit. And, it’s just SOOOO ‘80s!

"'Christmas Treat' by Julian Casablancas is a hilarious 'Saturday Night Live' skit song turned into a legit, drive-fast (but not too fast), rock-n-roll everybody sing-a-long song. Just perfect. Rockin’, happy and loud. The only Christmas song I know which gives a shoutout to the USA!

"'It Doesn’t Often Snow at Christmas' by The Pet Shop Boys is a synth-pop masterpiece about the importance of Christmases past. Lots of crazy noises, horns, choirs, church bells and everything else a good Christmas song should have. Oh, and there’s an insanely ear-wormy chorus you can sing along to.

"'Just Like Christmas' by Low has wonderful low-tech production, jingle-y sleigh bells and beautiful vocals. it feels young and adventurous and full of heart. One of the few modern Christmas songs that works and feels classic. I stop every time I hear this played in Target and just listen.

"'Father Christmas' by The Kinks is like the Wes Anderson of Christmas songs. A more cynical version of Christmas music, but punky and fun. Not for playing in front of the kids!

'''Christmas (Baby Please Come Home)' by Darlene Love is the opening credits song for the movie 'Gremlins' and I burst out in tears every time I hear it or see it in the movie. Nostalgia, magic and happiness all mixed together. Death Cab for Cutie has a really good version, too. But man, it’s all about it being in 'Gremlins' (one of the best Christmas movies, EVER!).

"I always try to add 'Sally’s Song' by Catherine O’Hara from 'The Nightmare Before Christmas' soundtrack to my Christmas playlists. It’s sad and melancholy, and fits in with other heartbreaking Christmas songs. The vocals are so haunting and beautiful.

"'Merry Christmas Everybody' by Train kind of sounds the best, even though I could have picked a few other versions of this song, including the original by Slade. The scream-along chorus would be perfect at a holiday party or at a rowdy bar. Equal parts upbeat and cynical. Still gives me chills. To me, this song feels what it’s like to be an adult at Christmas.

"'Christmas is the Time to Say I Love You' by Billy Squier is a silly ‘80s rock and roll Christmas song. Another one of those “best enjoyed by drunk people” Christmas songs. Lots of fun.

"'Santa Jenny 867-5309' by Tommy Tutone is one I didn't even know existed until a couple of years ago. Just a novelty version of Tommy Tutone’s original ‘80s hit. Makes me laugh every time I hear it.

"'Mary’s Boy Child/Oh My Lord' by Musical Youth is full of amazing reggae Christmas vibes. Sounds a lot like 'Pass the Dutchie,' which is awesome. Another very ‘80s song.

"Finally, I burst out crying when I hear the first few notes of 'Believe' by Josh Groban from 'The Polar Express' soundtrack. I can’t even write about it. But, I still love it."

Chris Sadeghi, reporter: "It's Bing Crosby's 'Do You Hear What I Hear.' One of only a handful of Christmas songs to focus on the reason for the holiday rather than snow, Christmas trees, and presents."

Kristi Baugh, business coordinator: "Mine is 'Rudolph the Red Nosed Reindeer.' Who doesn't love a story where the little guy that gets bullied and made fun later gets the glory of doing something great with recognition from their boss or higher-up? 'Jingle Bell Rock' is also a favorite, just because it has an upbeat and makes ya tap your feet and sing along!"

Kyle Roberts, meteorologist: "While it might not be accurate of North Texas (Haha, I can dream!), I picture the Charlie Brown Christmas special where they are walking through snow whenever I hear 'Christmas Time is Here' by the Vince Guaraldi Trio."

Britany Johnson, desktop support technician: "It's not Christmas until I hear the Temptations version of 'Silent Night,' TLC's version of 'Sleigh Ride' and the 69 Boyz' 'Whatcha Want For Christmas.' My family and I played these songs a lot during the Christmas holiday and it honestly place me more in the Christmas spirit."

Crysta Lee, director: "'We Three Gentlemen Medley' by Lindsey Stirling is a favorite because it’s a musical masterpiece. It goes back and forth between 'We Three Kings,' 'God Rest Ye Merry, Gentlemen' and 'Carol of the Bells.' Through most of the track two songs are simultaneously playing on top of each other. It’s brilliant. Pretty much all her Christmas tracks are amazing, but this one is good because you get the mix."

Ryan Osborne*, digital producer: "Robert Earl Keen's 'Merry Christmas From the Family.' It holds up as a good song, no matter the time of year. It's Robert Earl Keen. And who doesn't like egg nog and margaritas?"

Jake Harris, digital producer: "The 'Home Alone' choir version of 'O Holy Night.' This was the first version of the hymn that I heard on a regular basis and it's become a favorite."

Jiselle Rodriguez*, digital producer: "'Merry Christmas, Happy Holidays' by *NSYNC will make you dance, and it will get stuck in your head. It's the beauty of pop music. Think of it when you're looking for an upbeat, happy-go-lucky song to play during parties. My family loves to dance, so this is always at the top of my playlist."

Jennifer Prohov, digital journalist: "'Grandma Got Run Over by a Reindeer,' 'Let it Snow,' 'Here Comes Santa Claus' and all things Bing Crosby mean Christmastime to me!

Jozelyn Escobedo, digital journalist: "Definitely 'Feliz Navidad'! Pretty sure I learned this song in preschool. It’s so happy, catchy and reminds me of all the yummy winter foods, like tamales!

What's your favorite holiday song? Let us know in the comments, and in the meantime, you can find our playlist at this link or in the player below.

*An asterisk denotes a former WFAA employee. In the holiday spirit, we won't be Grinches, and we'll keep their answers.