The former Dallas police officer is charged with murder in the death of her upstairs neighbor. 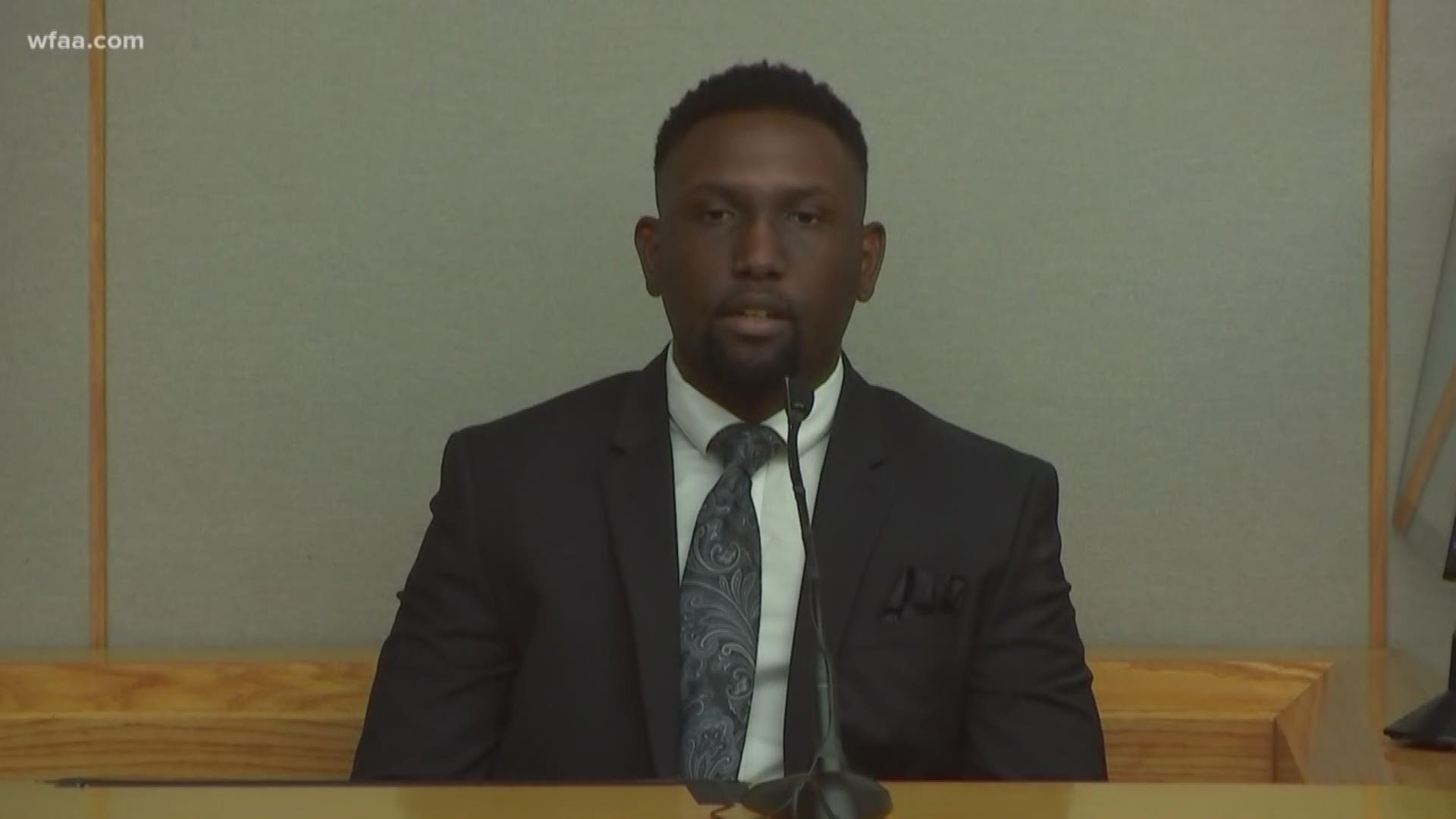 Guyger, 31, is charged with murder in Jean’s death. She was off duty but still in uniform when she mistakenly went to the wrong apartment.

The door was unlocked and not properly latched when she tried to use her keys on Jean’s door. She says she thought he was an intruder and shot him in the chest.

Guyger’s keys still hung from the door lock when the first officers arrived. Body camera footage played Tuesday for jurors showed the frantic scene. Officers took turns performing CPR on Jean, who was barely breathing and had a light pulse.

"Come on chief," Officer Michael Lee repeatedly tells Jean while he and another officer trade places trying to resuscitate the dying man.

When paramedics arrived, Jean was no longer breathing and had no pulse, according to court testimony.

Jean’s family left the courtroom while the body-camera footage was played. The video showed Jean lying on his living room floor. He was dressed in shorts and a T-shirt. His sandals appeared to have come off his feet after he was shot.

Blood pooled around Jean’s left shoulder. A bowl of vanilla ice cream with crumbled chocolate chip cookies sat uneaten on his ottoman. The TV was still on, and Jean’s laptop sat opened next to the ice cream bowl.

Two days later, a Texas Ranger walked through the apartment. Video from the investigator’s walk-thru showed a bullet hole in the living room wall, bloody towels where Jean fell and the now melted ice cream in the bowl on the ottoman.

Dallas police Chief Renee Hall asked the Texas Rangers to take over the investigation the day after the shooting.

Jurors have not been told that the investigation changed hands or why. No explanation was given for why a Texas Ranger was testifying Tuesday afternoon.

The jury, which has been sequestered for the duration of the trial, also did not hear Prosecutor Jason Hermus allege Guyger was treated differently because she was a police officer at the time of the shooting.

Guyger was fired from the Dallas Police Department weeks after Jean’s death. Jurors will not hear about Guyger’s employment status.

Several friends gathered around Guyger as Sgt. Breanna Valentine pulled into the parking garage, dash-camera video showed. Hermus asked Valentine whether the friends, who appeared to be police officers, were members of the Dallas Police Association.

Guyger’s defense team objected to the line of questioning, and jurors were told to leave the courtroom.

Valentine told Guyger to sit in the squad car and informed her the dash camera was recording. The sergeant later turned off the camera after Dallas Police Association President Michael Mata told her to.

Hermus argued the action showed Guyger was given special treatment.

“This investigation from the very beginning treated Amber Guyger differently because she was a police officer,” Hermus said.

Defense attorney Robert Rogers said it was not in Guyger’s control whether the dashcam video was turned off. He also said Mata had called an attorney for Guyger, a practice that is common in the police association.

Ultimately, Kemp said the line of questioning about Mata and the dashcam video was irrelevant to the murder case.

Joshua Brown lived across the hall from Jean. He was returning home when he heard loud voices as he walked toward his apartment.

He said it sounded like "two people meeting each other by surprise" but couldn't make out what the voices were saying. After the shouting, he heard gunshots.

Brown had met Jean earlier in the day for the first time. He choked up and put his head on the witness stand when he recalled regularly hearing his neighbor singing in the mornings.

It was always either gospel music or Drake.

It was the second time Drake was brought up during the trial. On Monday, Jean's sister said she had spoken with him before his death about his upcoming birthday.

He wanted concert tickets to see Drake, but she insisted he was getting a set of pots and pans.

"I thought we agreed you were going to be a grown up this year," Alyssa Findley recalled telling her brother.

On Tuesday, Jean's family smiled and murmured "mmhmm" after Brown talked about his neighbor's singing.

Other South Side Flats residents also testified they heard loud voices before the shooting.

Prosecutors asked each person whether they heard any specific commands shouted. No one heard a police officer yell commands.

Defense attorneys said during opening statements that Guyger yelled "Hands" at Jean when he advanced toward her in the apartment.

They say the shooting was in self-defense.

Testimony will resume at 8:30 a.m. Wednesday.