Amber Guyger faces up to 99 years in prison after she was found guilty of murder in the shooting death of Botham Jean. 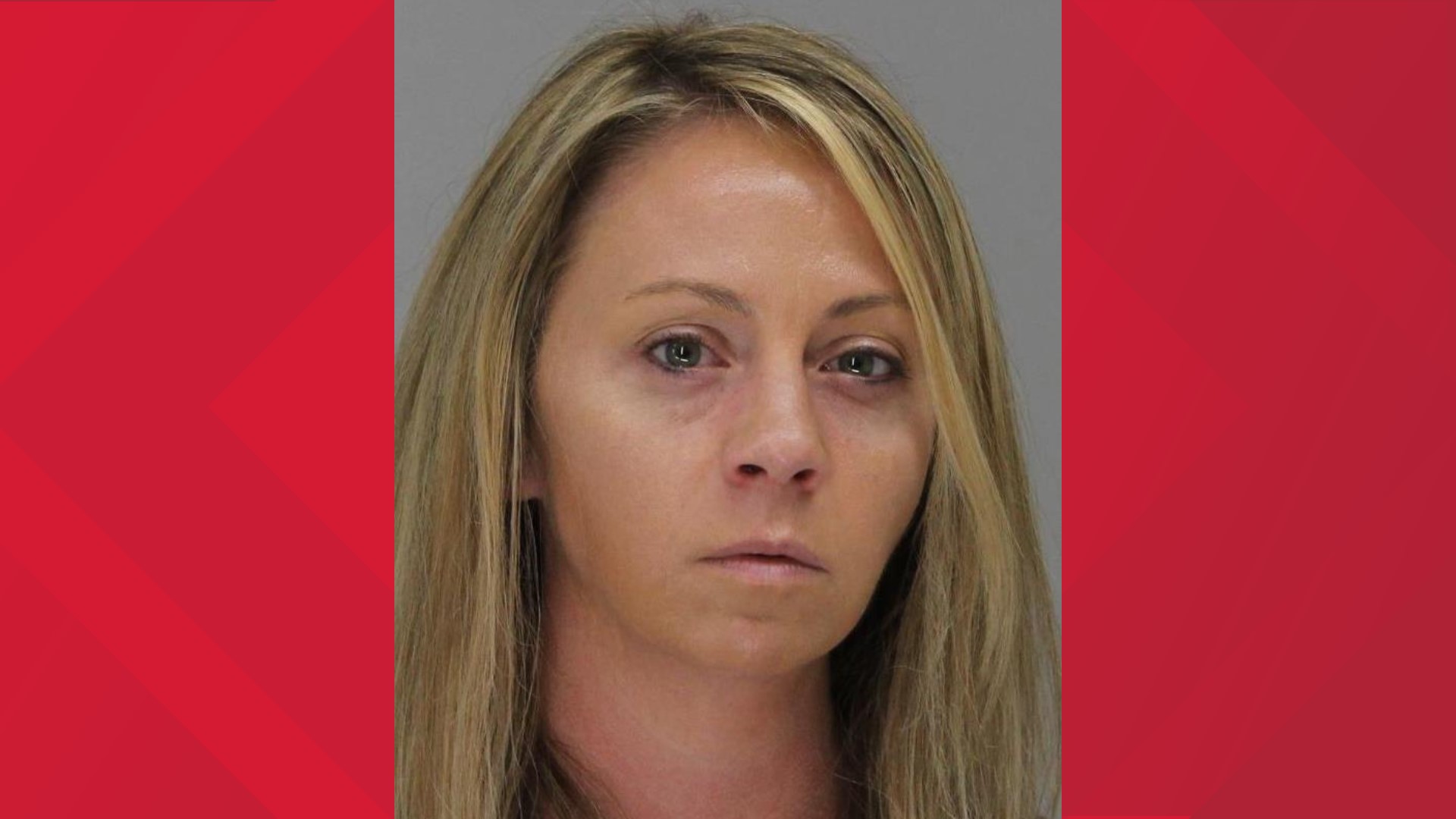 The jury found Amber Guyger guilty of murder in the shooting death of her neighbor Botham Jean on Sept. 6, 2018.

The jury reached the verdict late Tuesday morning, a day after closing arguments were delivered by both the state and defense.

"Yes Lord! You never failed me yet! #JusticeforBotham," wrote Allison Jean, Botham's mother, on her Facebook page shortly after she heard that Guyger was found guilty.

Nine deputies stood in the courtroom as Jean and Guyger's families assembled for the verdict.

As the jurors filed in, they had no reactions on their faces.

RELATED: Murder vs. manslaughter: What were charges considered by jury in Amber Guyger trial

While bailiffs warned those in the courtroom about cellphone use and reactions, a woman yelled "yes" as the judge read the guilty verdict. A bailiff standing behind the woman immediately admonished, ”No outbursts!”

Jean's mother, family, and supporters began hugging and patting one another on the back.

Her face ecstatic, Jean raised both her arms up toward the sky and mouthed "Oh God!" as a press still photographer raised his camera and captured the moment.

Credit: Tom Fox/The Dallas Morning News
Botham Jean’s mother, Allison Jean, rejoices in the courtroom after fired Dallas police Officer Amber Guyger was found guilty of murder by a 12-person jury in the 204th District Court at the Frank Crowley Courts Building in Dallas, Tuesday, October 1, 2019. Guyger shot and killed Botham Jean, an unarmed 26-year-old neighbor in his own apartment last year. She told police she thought his apartment was her own and that he was an intruder. (Tom Fox/The Dallas Morning News/Pool)

“Good,” Jean's mother whispered as she and the rest of the family, who appeared dazed, were rushed from the courtroom flanked by police. “I trusted Him."

Guyger's family remained in the courtroom, holding each other silently as a loud cheer could be heard just outside the 204th district courtroom.

The former officer stared ahead, never turning back toward the gallery after she was found guilty. As people filed out of the courtroom, Guyger's head dropped and her shoulders began to shake as she used a tissue to wipe her face.

After reading the verdict, Judge Tammy Kemp dismissed the jury for lunch and said the sentencing phase would begin at 1 p.m. Tuesday. Guyger faces up to 99 years in prison. 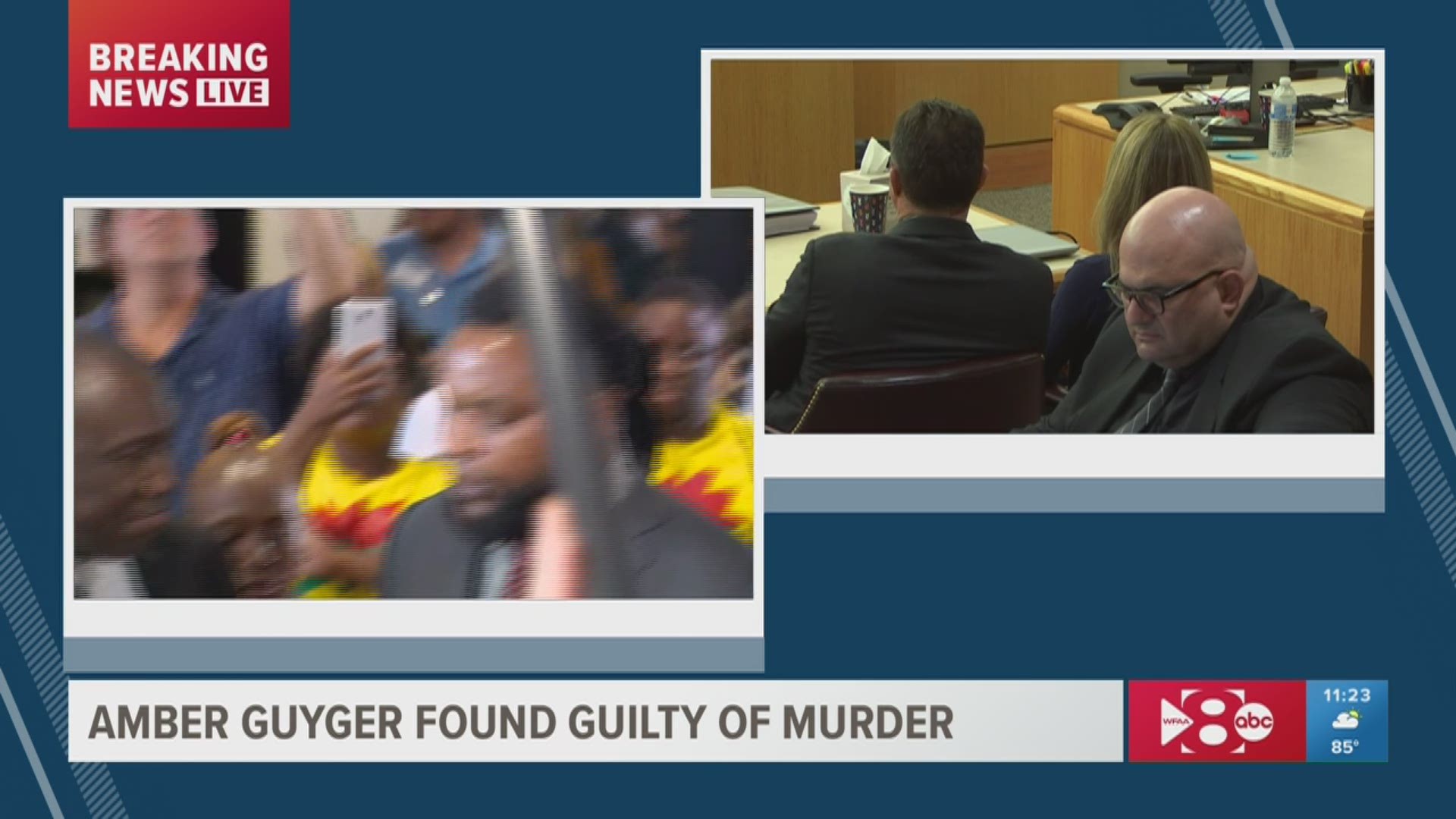 The trial and deliberations

The murder trial for Guyger revealed details of what happened in the moments just before and after the Dallas police officer shot and killed an unarmed man inside his own apartment at the South Side Flats.

Jean was sitting on his couch eating vanilla ice cream and watching TV when Guyger opened his apartment door. It was later determined a defect left the door unlocked, which is why Guyger was able to get inside.

Jean's laptop was open and on and it appeared he had AirPods in his ears. He was dressed comfy, in shorts and a T-shirt.

During her testimony, Guyger said she thought she was entering her own apartment that night. She said she heard movement inside the apartment as she started to open the door and then saw "a silhouetted figure."

The former officer said she shouted out an order for the person to put their hands up, but said she felt threatened when the figure began to move toward her.

That's when she fired two shots, one of which went through Jean's chest and pierced his heart.

Guyger said she feared for her life.

Prosecutors argued that Guyger missed a number of visual cues the night she said she mistook Jean's apartment, located one floor above her third-floor unit, as her own. One of those clues, they said, was Jean's red doormat.

They also said Guyger was focused on herself rather than the victim, Jean, after she fired the shots.

During his cross-examination, prosecutor Jason Hermus pointed out that Guyger texted her former police partner, who she was also involved in a sexual relationship before officers arrived at the scene.

They also grilled Guyger about her lack of action after the shooting, asking why she didn't use a first aid kit she was carrying in her backpack or perform proper CPR on Jean as he was on the ground dying.

Guyger was charged with murder, but the jury had the choice to convict her of murder, manslaughter or choose to acquit.

Here’s the language from the jury charge on each of these terms:

"Our law provides a person commits the offense of manslaughter if she recklessly causes the death of an individual. A person acts recklessly or is reckless with respect to the result of her conduct when she is aware of but consciously disregards a substantial and unjustifiable risk that the result will occur. The risk must be of such a nature and degree that its disregard constitutes a gross deviation from the standard of care that an ordinary person would exercise under all the circumstances as viewed from the actor’s standpoint."

Guyger was fired from the Dallas Police Department in the weeks following the shooting.

Reaction from the community started to spread quickly after the guilty verdict was read.

“Nothing will bring Botham back, but today his family has found some measure of justice," said Ben Crump, a civil rights attorney. "What happened on September 6, 2018, is clear to everyone: This officer saw a black man and shot, without reason and without justification. The jury’s thoughtful verdict sets a powerful precedent for future cases, telling law enforcement officers that they cannot hide behind the badge but instead will face justice for their wrongful actions.” 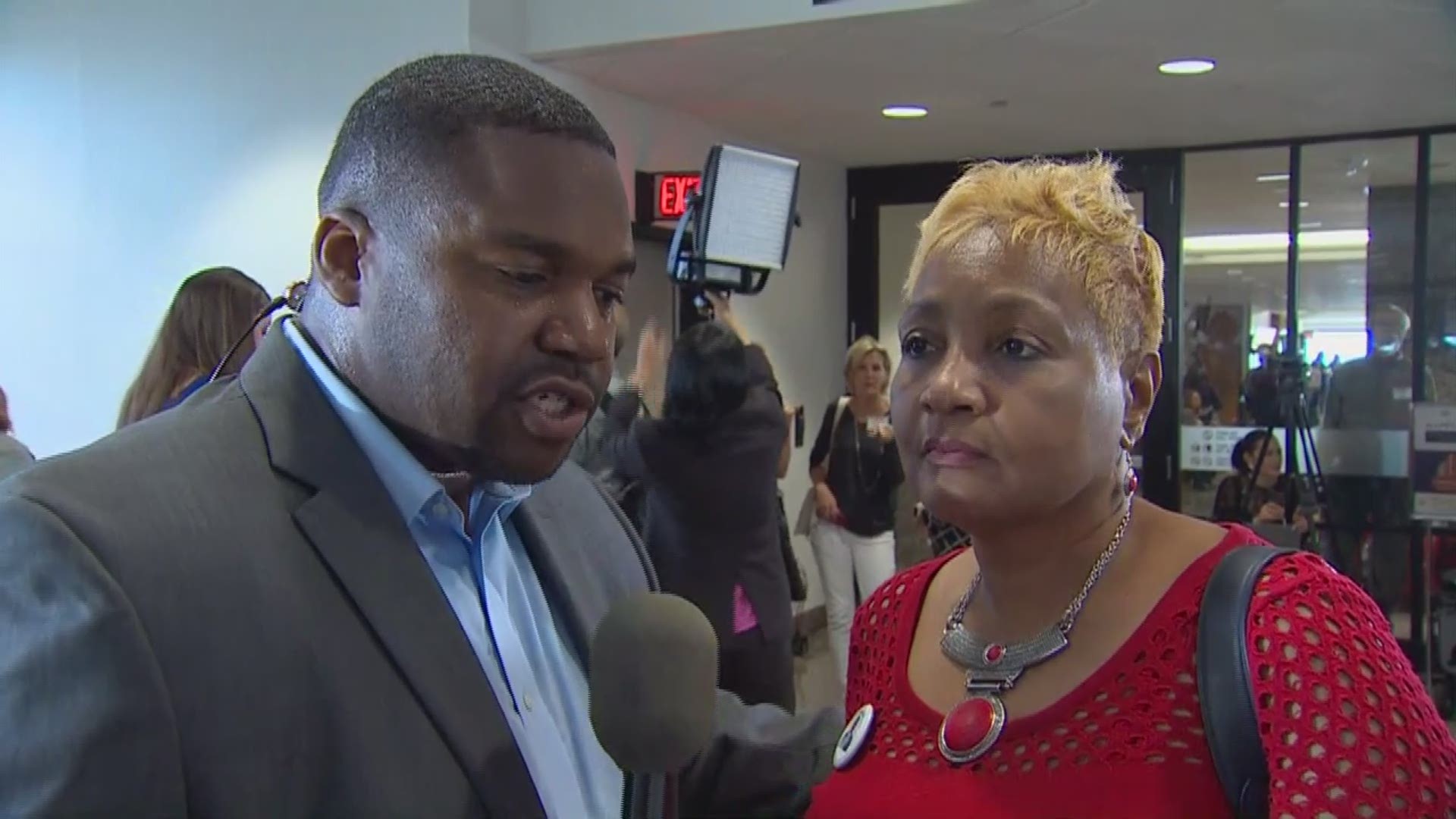 RELATED: Innocent mistake or murder? Amber Guyger's fate now in the hands of the jury

RELATED: Botham Jean's life honored on what would have been his 28th birthday