Prescription for disaster: Is the system stacked up against victims of medical malpractice?

“I drove to work today with more insurance than most health care providers performing surgery in the state of Texas,” Lyons said. “So you can get a judgment but it’s not worth the paper that it’s printed on.” 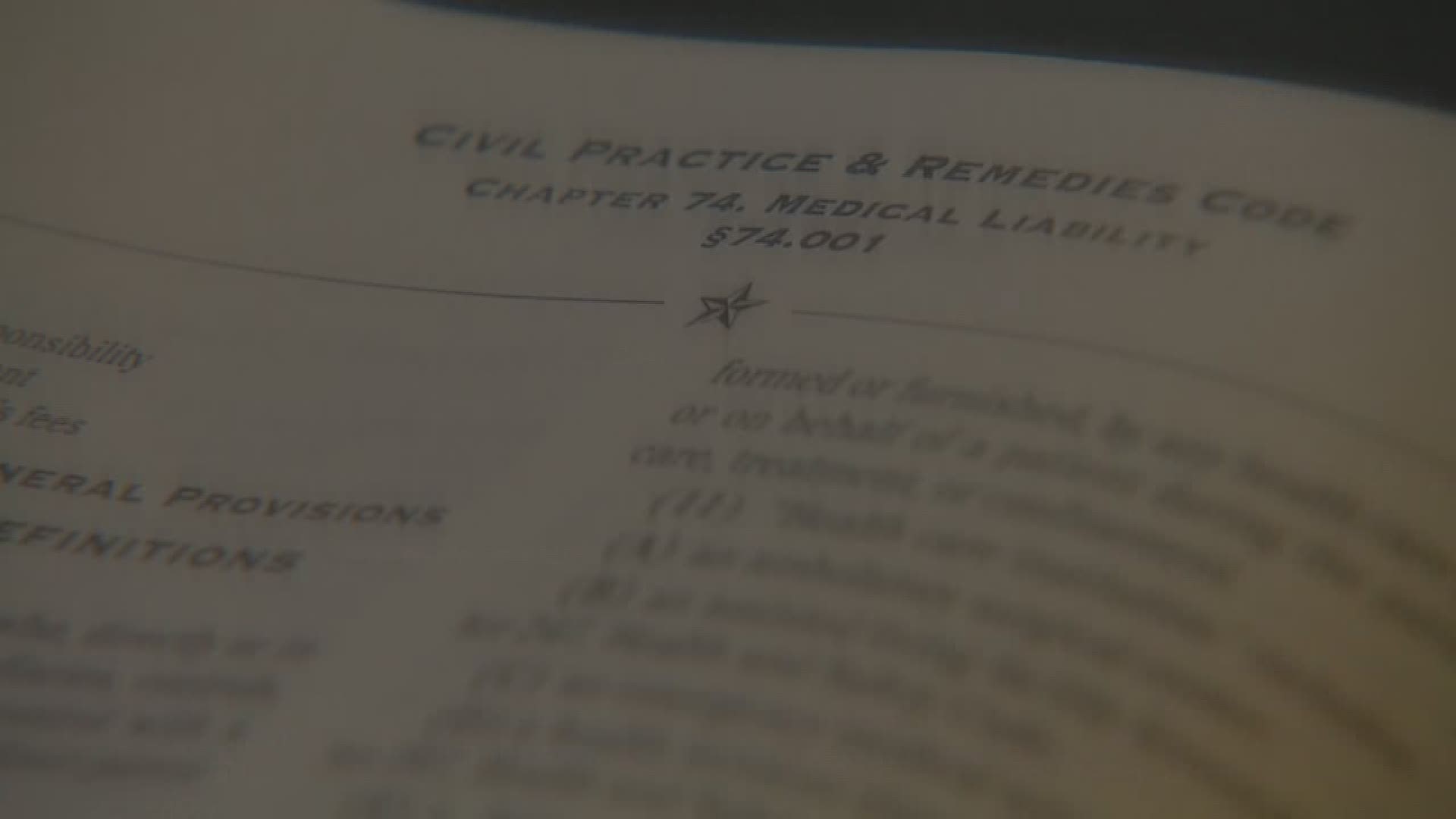 There’s not a day that Philip Mayfield doesn’t endure excruciating pain. It’s been that way since April 2013.

Mayfield was among the last of the nearly three dozen patients maimed or paralyzed in botched surgeries performed by Dr. Christopher Duntsch. The disgraced former neurosurgeon cut into his spine.

The surgery, performed at a Frisco surgery center, left him partially paralyzed and with debilitating pain syndrome known as the “Suicide Disease.”

“It feels like my body’s on fire,” says the Princeton resident. “I would describe it as a knife being stabbed down the spine.”

For people like the Mayfields, the civil justice system is stacked up against them in ways big and small. Personal injury attorneys say doctors also frequently simply do not carry enough malpractice insurance.

It leaves people like the Mayfields wondering, “How did we get here?”

Well, it’s helpful to look back to 2003. That’s the year the Texas Legislature passed a medical malpractice tort reform, a law touted by advocates as a way improve patient access and bring more doctors into the state of Texas.

“I don’t like to use the word tort reform,” says Dallas attorney Mike Lyons. “Tort reform implies that it’s doing something good.”

The law came with lots of changes.

Chief among them was setting a cap for pain in suffering in non-death cases: $250,000 each for the doctor, hospital and any other medical facility in the unlikely event that another entity is involved. It set a total cap of $750,000.

Realistically, personal injury attorneys say that in most cases only the doctor can be held accountable under current laws.

That’s because holding a hospital accountable for the actions of a doctor is difficult at best.

For example, in the case of “negligent credentialing,” in which a hospital hires a doctor who it should not have hired because they weren’t fit to practice for some reason, the law in Texas requires that plaintiffs meet a “malice” standard. In other words, they have to prove the hospital actually intended to harm patients.

Attorneys say that’s an impossible burden, especially considering the fact that by law, the evidence needed to demonstrate malice is privileged by statute.

There are also caps on what can be collected in death cases. Those caps, unlike the ones for pain and suffering, do rise with inflation but are hard caps. It is currently about $1.65 million. That may sound like a lot of money, but consider that in death cases, your pain and suffering and economic damages are capped. Do you have more economic damages than that? Too bad says the law. Taxpayers get saddled with that tab in many instances.

“Unless there is really substantial future lost income, these cases are very difficult to prosecute,” said Chris Hamilton, another Dallas attorney. “So if somebody has been the victim of horrific medical malpractice and they’re not a high earner, then they’re essentially denied access to the court system.”

Brian Jackson, general counsel for the Texas Alliance for Patient Access, says the law has worked as intended.

“I believe that patients have more access to health care and that health care quality has been improved,” he says.
The alliance is funded by hospitals, doctors and other industry groups.

He does not see a need for the pain and suffering non-death caps to rise with inflation.

“Pain and suffering is very subjective,” he said. “The poor people that were victims of Dr. Duntsch were the victims of a criminal and it’s hard for a civil system to in any way to address that.”

For example, one provision could result in the patient’s lawyer having to pay the other side’s legal bills.

“What’s happening now is that people have less access to the courts,” Lyons said. “You lose the ability to police bad health care professionals. There is an absolute concerted effort to end your right to have a trial by jury.”

After Texas passed tort reform, the number of medical malpractice lawsuits dropped precipitously – by some figures as much as 60 percent.

But over the last two years, the numbers have started edging back up.

“It has created a perverse set of incentives that has allowed malpractice to greatly increase,” Hamilton said. “I hear complaints all the time from good doctors who say tort reform and those caps have decreased the quality of health care.”

The Mayfields never collected a dime of insurance from Duntsch – and neither did a number of the other patients.

There just wasn’t enough money to go around.

“I drove to work today with more insurance than most health care providers performing surgery in the state of Texas,” Lyons said. “So you can get a judgment but it’s not worth the paper that it’s printed on.”

Jackson does not think state law should require doctors to have malpractice insurance. He says most hospitals require a certain amount of insurance.

“The system has worked well,” he says.

That changed after he saw it play out after his mom, Floella Brown, died from a botched Duntsch surgery in 2012
“It was an absolute nightmare,” he said. “It cost so much money. There was just very little to go around and, of course, the attorneys got the vast majority of it.”

His family settled with Duntsch insurance about two years after she died. The family walked away with very little for their loss, he says.

The Mayfields did end up settling with the hospitals. They can’t talk about the amounts, but they say it was far from enough to cover the drastic change to their lives.

But what happening to him is costing taxpayers.

The former truck driver and Navy veteran can’t work. He is on disability and Medicaid.

“We have three children. They have to go to college,” his wife says. “Daddy could have been working and making money and putting it aside.”

Angela quit her job to stay home with him.

“I fix his breakfast,” she says. “I fix his lunch. I do everything for him. He’s in constant pain.”

Mayfield is a man with an infectious laugh, despite all the pain. He is a man of faith. He is a man who misses the simple of joy of tossing a football in the front yard with his three sons.

“I remember saying I would have that surgery and I would be well and I would be at (my son’s) track meet,” he says. “It was going to be a quick recovery.”

A tear rolls down his son’s face as his father speaks.

His dad did not make it to that track meet or any of the others that followed. He says he misses seeing his dad in the grandstands.

The Mayfields and other victim in the Duntsch case say the system failed them and needs to change.
“What they have in place now is not for the people,” his wife says. “It’s for the doctors.”