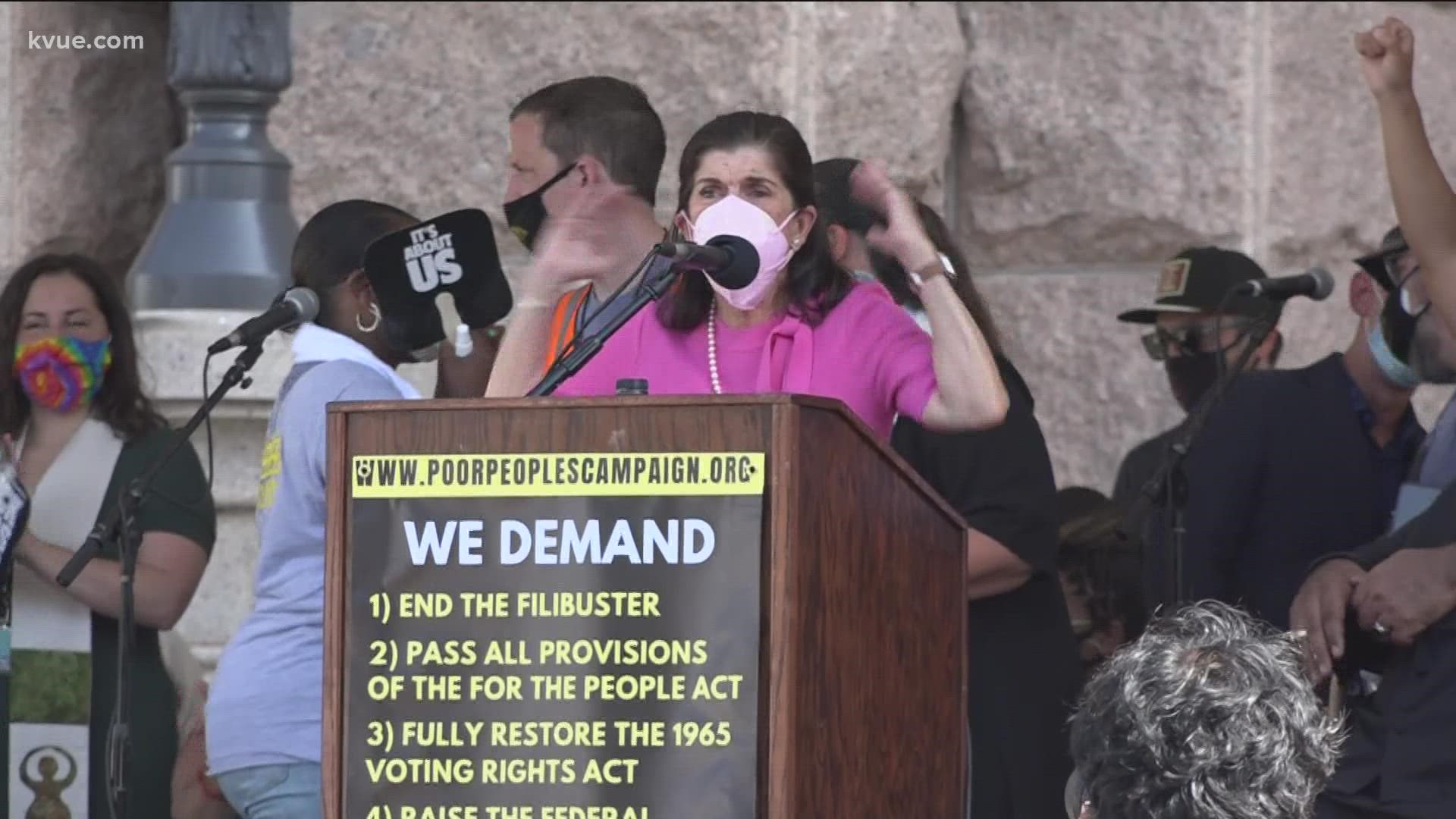 AUSTIN, Texas — County music legend Willie Nelson performed at the Texas State Capitol on Saturday for the conclusion of the "Selma to Montgomery-style" voting rights march.

The 27-mile march started on Wednesday, July 28, in Georgetown. Marchers met at the Texas AFL-CIO building in Austin at 9 a.m. on Saturday to finish the trek to the Capitol. There, marchers began a rally at 10 a.m. where Nelson performed.

Luci Baines Johnson, daughter of Former President Lyndon B. Johnson, said her father would be proud of what they are doing. He signed the Voting Rights Act of 1965 almost 56 years ago. @KVUE pic.twitter.com/6tM1ZJ1FEr

Organizers of the rally, including O’Rourke, believe recent legislation being supported by Texas Republican Lawmakers is a threat to voting rights.

Senate Bill 1 and House Bill 3 would ban drive-thru voting and 24-hour voting, among other things. A Harris County election worker says these resources allowed flexibility and better access for voters during this past election.

"They tried to invalidate all 130,000 votes, but we fought them in the courts, and we won!” exclaimed the election worker at the rally.

While the rally was happening, there was a small counter rally taking place just outside the Capitol. Republican State Sen. Bryan Hughes was there. He is actually the one who wrote Senate Bill 1 and says the bill consists of common-sense election reforms.

"Once they read the bill they'll realize these are common-sense reforms,” said Hughes. “Easy to vote, hard to cheat. When the Democrats do come back in the House, we'll have a good debate, and we'll pass this bill because it protects the votes of every Texan."

Civil rights activists, like Rev. Barber, are calling on the federal government to intervene and pass the "For the People Act" to prevent states from passing legislation that they believe limits voter access.

"Mr. President, let me tell you something you might not be used to hearing from a preacher, but ain't no need to have power if you're not going to use it for good,” said Rev. Barber.

Nelson issued the following statement before his performance:

“It is important that we ensure the right for EVERY American to vote and vote safely. Laws making it more difficult for people to vote are UnAmerican & are intended to punish poor people, people of color, the elderly & disabled…why? If you can’t win by playing the rules, then it’s you & your platform – not everyone else’s ability to vote.”

Willie Nelson is now performing 🎶 @WillieNelson says: “If you don’t like whose in there, vote him out.”@KVUE pic.twitter.com/LkEw0OO5GZ

The march was led by the Poor People’s Campaign, Black Voters Matter and O’Rourke’s organization Powered By the People, among other organizations.

It comes as the majority of Texas House and Senate Democrats remain in Washington, D.C., to break quorum during the Legislature’s special session due to a controversial election reform bill.

Watch: Dashcam video shows what happened before Austin officer was hurt in shooting