‘Trump is no longer our leader’: Dallas Republican calls for impeachment in scathing editorial

"Our president has mocked and belittled our immigration laws, our intelligence agencies, our foreign policy strategy and even the American people," Jason Villalba (R-Dallas) wrote. 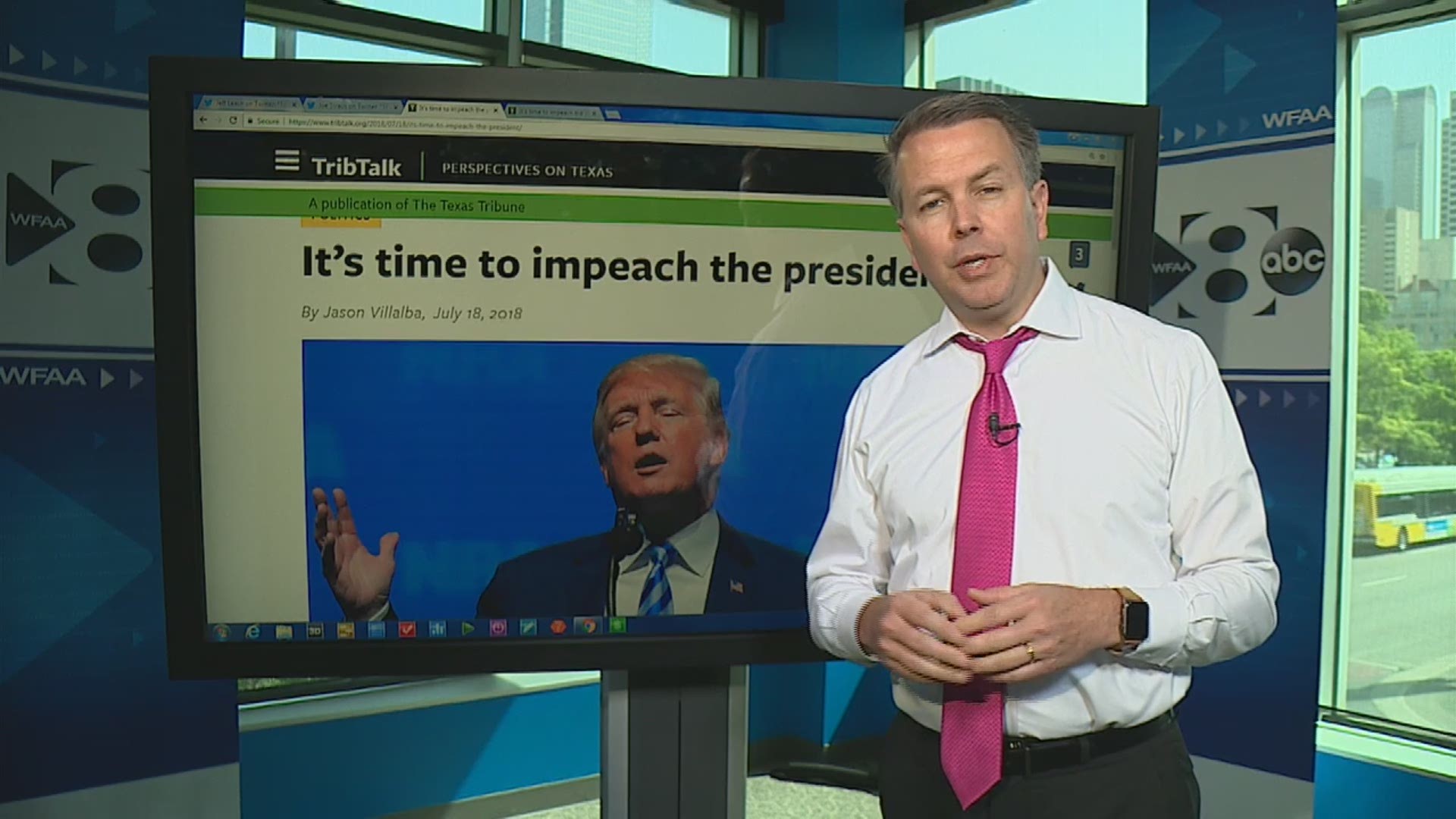 A Republican state representative from Dallas unequivocally called for the impeachment of President Donald Trump in a blistering editorial published Wednesday morning.

State Rep. Jason Villalba didn’t mince words in his criticism of the president – who he referred to as a “charlatan” – or his supporters, who he dubbed “sordid, ugly, Trumpists who require anger and vitriol.”

He opined that the political climate in the United States – or at least the Republican party – has become a “contorted caricature” created by the “alt-right.”

“If we don’t stop this man now [...] we will be equally culpable in what he has planned for our great nation,” Villalba wrote.

READ: Villalba: It's time to impeach the president

The scathing opinion piece, published by The Texas Tribune, comes at the heels of Trump’s Helsinki summit, where Trump accepted Russian President Vladimir Putin’s denial of meddling in the 2016 election – jilting American intelligence that led to the indictment of 12 Russian nationals for allegedly hacking the Democratic National Convention.

A Russian foreign minister called the summit “better than super.” Trump did attempt to walk back the comments Tuesday by accepting that meddling occurred. Villalba clearly wasn’t satisfied.

“Our president has mocked and belittled our immigration laws, our intelligence agencies, our foreign policy strategy and even the American people,” Villalba wrote.

The 47-year-old District 114 representative made clear that the editorial wasn’t a denouncement of the GOP, iterating his Republican beliefs.

“I believe in fiscal conservatism, American exceptionalism, a moral rubric based on Judeo-Christian values, and on a basic fealty to the essential standards set by our forefathers: truth, liberty, self-sacrifice and basic goodness,” he wrote, invoking Reagan’s name.

“And yet, today, our own president of the United States mocks these basic tenets.”

It’s not the first time Villalba has openly criticized the president. In a TribTalk editorial in March of 2016, he called Trump “the death of the Republican party.” In his Wednesday piece, he claimed he lost his bid for re-election to the Texas Legislature in March because of his opposition of the president.

“I have no regrets. I always do what I believe is right,” he wrote. “That is not politically expedient, but it helps me sleep at night.”

A chorus of politicians have joined in the denouncement of Trump’s meeting with Putin, including outgoing Republican Texas House Speaker Joe Straus and Republican Rep. Jeff Leach.

Villalba’s piece, though, took the criticism a step further: “Donald J. Trump is no longer our leader,” he wrote. The editorial asks Americans to “push [Trump] into the ash bin of history” before plainly stating:

“Today, I ask you to impeach Trump.”

RELATED: What happens if the president is impeached?