AUSTIN -- A day before the 85th Texas Legislature gavels into session, Lt. Gov. Dan Patrick announced his intent to run for a second term. 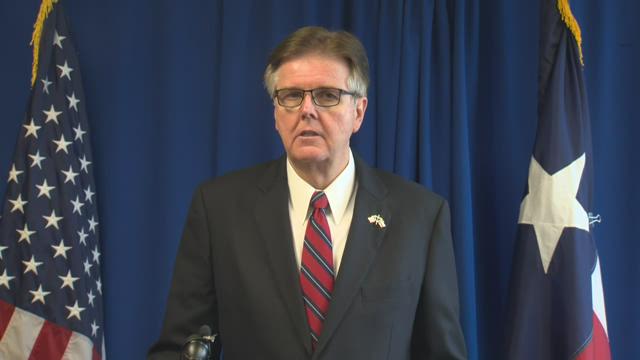 AUSTIN -- A day before the 85th Texas Legislature gavels into session, Lt. Gov. Dan Patrick announced his intent to run for a second term.

"Today, I'm announcing I'm running for lieutenant governor in 2018," said Patrick to a crowded room full of reporters and photographers at the Republican Party of Texas Monday morning.

Patrick, 65, said his campaign will also announce that he has $13.6 million on hand.

"We have more money - to my knowledge - than any other lieutenant governor in the history of Texas," added Patrick. "I think it shows we have strong support."

Finally, Patrick endorsed Gov. Greg Abbott for re-election, although Abbott has yet to announce his intentions.

Why would Patrick announce now? He said he wanted to stop rumors that he might challenge Abbott or U.S. Sen. Ted Cruz.

An early announcement also means Patrick would get a jump on fundraising and leave no doubt about his political future to any potential challengers.

He said he did not know whether he might draw any primary challengers.

Patrick is popular among conservatives. Sixty-three percent of registered voters who identify as Republicans approve of the job he's doing, according to an October 2016 poll commissioned by WFAA.

Ever since, Patrick has become one of the most outspoken conservative voices in the state.

Among his current political issues is the Texas Privacy Act - also known as the bathroom bill. Despite opposition from 1,100 of the state's largest companies, Patrick supports Senate Bill 6 which requires people to use public restrooms that correspond with their biological sex.

Patrick is the first top state official to officially announce his re-election.