When the Pet Loss Center of McKinney delayed in getting ashes back to pet parents, those parents drove to the site to take back their deceased animals. 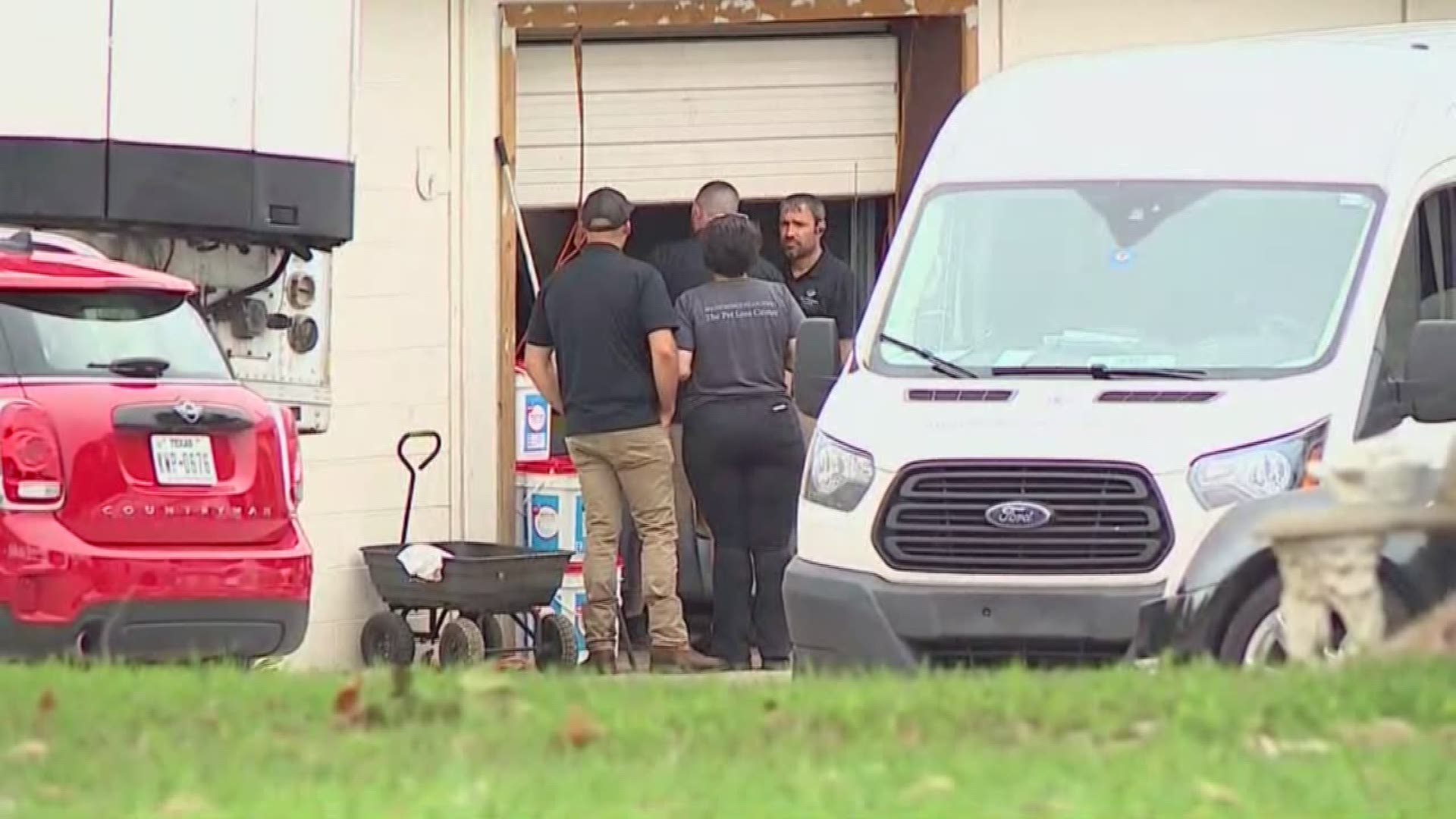 MCKINNEY, Texas — The Collin County Sheriff's Office confirmed to WFAA Tuesday that they are part of a joint effort currently underway at the Pet Loss Center of McKinney. Officials with the sheriff's department, the town of New Hope and animal services convened at the pet crematorium Tuesday and could be seen washing down trucks at the facility.

The crematorium has been under severe scrutiny lately after pet parents say their pet's remains have not been returned in a timely fashion. One pet parent told WFAA that the company told her it would be at least 30 days until her pet's remains would be returned, as opposed to the normal five to six day turnaround time.

The company told WFAA last week that the facility had a gas leak that severely stalled operations. Pet parents told WFAA that they were getting different reasons from management about the delays.

Several people, including neighbors, told WFAA that there were pets in bags stacked out in front of the facility. We could not confirm with the company whether this had occurred.

“The loss of a pet is devastating. As pet owners and lovers, we want to extend our deepest sympathies to all the parents that have lost their pets. We also offer our sincere apology for the delays and concerns our recent operational problems have had on our valued pet parents. We understand how much pets mean to their families. While we are doing our best, we regretfully have taken too long to return beloved pets to their families. Our focus is fulfilling our promise to honor these pets’ lives under our care and holding ourselves to the highest ethical standards in respecting pet parents’ wishes. To do this, we have engaged additional trained personnel and implemented around-the-clock operational hours, ordered new equipment, and enlisted the support of our other Texas Pet Loss Centers. We anticipate returning to our normal turnaround time by the end of June.

As we have for decades, The Pet Loss Center is committed to honoring the legacy of these beloved pets and pride ourselves on treating all pets, pet parents, and veterinary partners with the utmost respect and dignity.”

Sheriff Jim Skinner said he was contacted by the mayor of New Hope along with other concerned citizens about the crematorium. On Tuesday, the sheriff told the environmental crimes deputy to work with New Hope to "speed along any potential nuisance abatement that should be enforced."

The Collin County Sheriff's Department says inquiries into potential issues at the crematorium are "on-going." On Tuesday, our crews witnessed several families come to get their pets from the Pet Loss Center.

Richard Smith came to get his 10-year-old Golden Retriever who died recently. He's been waiting for the dog's remains since late May.

"We feel like we let her down. I'm not leaving until I get my dog," Smith said.