For a plane that was parked long ago, it is remarkable the Lockheed Constellation known as Columbine II is even airborne.

MOUNT PLEASANT, Texas — For a plane that was parked long ago, it is remarkable the Lockheed Constellation known as Columbine II is even airborne.

“For many of the people that live in Mount Pleasant, this is indeed the chance of a lifetime,” said historian Farris Rookstool III.

This isn't just an aircraft from another era; it is a piece of history. Columbine II made a pit stop at the Mid America Flight Museum in this East Texas town, a couple hours east of Dallas on Monday. 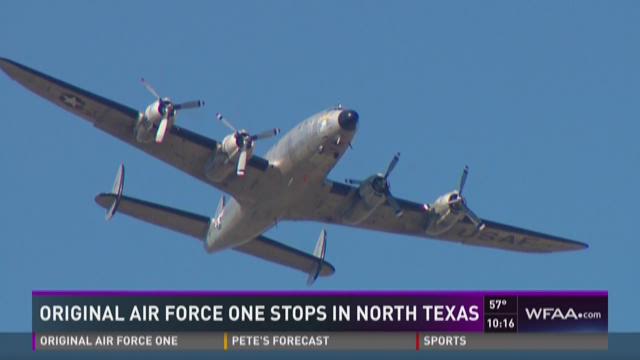 In 1953, the U.S. Air Force put this Lockheed VC-121A-LO in service as the personal plane for President Dwight D. Eisenhower.

Though the nose art always said Columbine II (named for the state flower in Colorado from which Mrs. Eisenhower hailed), this Constellation would eventually become the very first Air Force One.

The U.S. Air Force decommissioned it in 1968 and eventually sold it as surplus with a lot of other Constellations.

A crop-dusting enterprise purchased the old propeller plane and picked it over for parts, never knowing its historical significance.

Photos: The original Air Force One

Years later, they made it airworthy and flew it to several air shows, but never could sell Eisenhower’s aircraft. So about 16 years ago, they parked it back in the desert again.

Stoltzfus recently resurrected it from the boneyard. Though he would not disclose how much he paid for it, other reports over the years said the previous owner had a reserve price of $1.5 million.

Stoltzfus’ team spent a year putting the Constellation back together in Marana, Arizona, and flew it on Monday over to Mount Pleasant, Texas, about two hours east of Dallas on Interstate 30.

One of the plane’s most historic moments came in 1953 when the Air Force was using this plane to fly President Eisenhower to New York City. It nearly collided with another one from Eastern Airlines. Controllers got confused because both planes had the same flight number. So Eisenhower’s pilot created the moniker "Air Force One" to differentiate it from every other aircraft in the sky.

“Col. William Draper came up with that unique identifier, and it’s still used to this day. It’s an iconic name and an iconic brand,” Rookstool explained. “A president can fly on a Cessna 172, and as long as he’s on board, it’s known as 'Air Force One.'”

This is the only presidential aircraft that is privately owned, Rookstool added. All the others are in the National Museum of the United States Air Force in Dayton, Ohio and the Ronald Reagan Presidential Library in Simi Valley, Calif.

The Constellation will depart Mount Pleasant for Virginia late Tuesday morning, where it will undergo several years of cosmetic restoration before eventually being flown around the country as an educational tool, Stoltzfus said.