LYON, France — Megan Rapinoe stood on the field, arms outstretched, striking her now trademark victory pose symbolizing the confidence of a U.S. team that celebrated and savored each triumph at the Women's World Cup.

Rapinoe won the Golden Ball as top player and the Golden Boot as top scorer, and the United States backed up its brashness by winning while simultaneously making a strong statement for gender equity.

The U.S. won its record fourth Women's World Cup title and second in a row, beating the Netherlands 2-0 Sunday night when Rapinoe converted a tiebreaking penalty kick in the second half and Rose Lavelle added a goal.

Rapinoe scored in the 61st minute after a video review determined Stefanie van der Gragt had fouled Alex Morgan with a kick to the shoulder while competing for a deflected pass in the penalty area.

Two days past her 34th birthday, Rapinoe slotted the ball past Sari van Veenendaal for her sixth goal of the tournament. She became the oldest player to score in a Women's World Cup final.

"Getting to play at the highest level of the World Cup with the team we have is just ridiculous. But to be able to couple that with everything on the field and to back up all of those words with performances and to back up all of those performances with words, it's just incredible," Rapinoe said. "I feel like this team is in the midst of changing the world around us as we live, and it's just an incredible feeling."

Lavelle, at 24 the team's up-and-coming star, added her third goal of the tournament on an 18-yard left-footed shot in the 69th after a solo run from the center circle.

"It's been a long journey. It doesn't seem real yet. I hasn't hit me, it's so surreal, to be part of this group and to play with these players," Lavelle said.

The monthlong journey isn't over quite yet for players who captured the hearts of a nation. New York City Mayor Bill de Blasio needed just a few seconds after the match to invite the team to a ticker-tape parade up the Canyon of Heroes in Manhattan on Wednesday.

Fans, many dressed in red, white and blue, chanted "Equal Pay!" at the final whistle , a reminder players sued the U.S. Soccer Federation in March claiming gender discrimination. The sides have agreed to mediate the lawsuit. 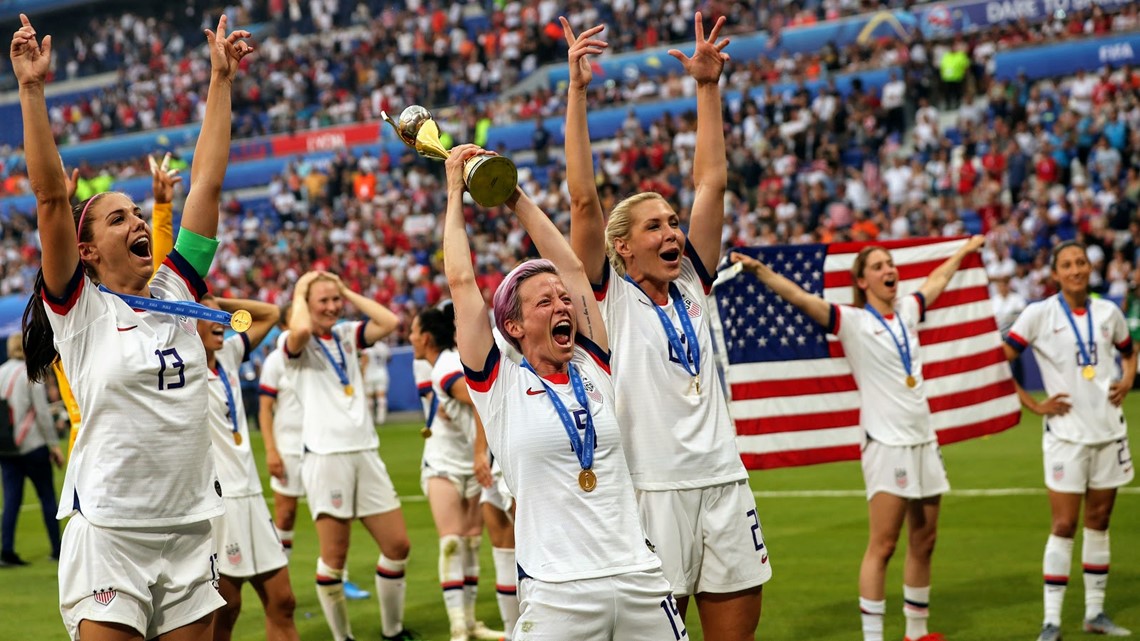 Rapinoe drew the ire of U.S. President Donald Trump by saying she would refuse to visit the White House. Trump called out Rapinoe on Twitter, saying she should never "disrespect our Country, the White House, or our Flag, especially since so much has been done for her & the team." He said he would invite the team win or lose.

But shortly after the title game, Trump tweeted: "Congratulations to the U.S. Women's Soccer Team on winning the World Cup! Great and exciting play. America is proud of you all!"

Rapinoe also called out FIFA on the eve of the championship, suggesting soccer's governing body was not doing enough to grow the women's game, pointing to unequal prize money and the scheduling of the final on the same day as the championships of the CONCACAF Gold Cup in Chicago and the Copa America final in Brazil.

Whether unequal treatment from soccer officials will change is uncertain. The Americans' dominance in France is unquestioned.

They never trailed at the tournament and set records with 26 goals and a 12-game World Cup winning streak dating to 2015. Jill Ellis became the first coach to lead a team to two Women's World Cup titles, and the U.S. joined Germany in 2003 and 2007 as the only repeat champions. While the U.S. has four titles, Germany is the only other nation with even two.

"It's just chemistry. They put their hearts and soul into this journey," Ellis said. "They made history."

FIFA President Gianni Infantino handed over the trophy, a stark contrast to four years ago in Canada, when then-president Sepp Blatter was a no-show as U.S. prosecutors investigated corruption in soccer's governing body.

With confidence that some called arrogance — triggering a backlash that the angry response was sexist — this American team established a standard that exceeded the U.S. champions of 1991, 1999 and 2015, becoming a goal for all others to match. Mia Hamm and Brandi Chastain were among the former American players who joined the current generation for the postgame celebration. Tobin Heath made angels in the fallen confetti.

The U.S. had scored within the first 12 minutes of its previous six matches but the European champions sat back to keep their defensive shape and kept the score 0-0 through the first half.

Video review, adopted by FIFA for the men's World Cup last year, showed its impact when Stephanie Frappart, the first woman to referee a men's Ligue 1 match, initially did not call the foul on Morgan, then went to the screen at the side of the field, watched replays and signaled toward the spot.

Rapinoe, who missed Tuesday's semifinal win over England with a hamstring injury, became the first woman to score on a penalty kick during a Women's World Cup final, her 50th goal in 158 international appearances. She ended the Netherlands' 317-minute scoreless streak and matched Morgan and England's Ellen White for most goals in the tournament, winning the Golden Ball based on fewer minutes.

Rapinoe was given a standing ovation when she was substituted in the 79th minute. The crowd of 57,900 at Stade de Lyon for Le Grand Finale included France President Emmanuel Macron.

Rebounding from a loss to Sweden on penalty kicks in the quarterfinals of the 2016 Olympics, the Americans opened the World Cup with a record 13-0 rout of lowly Thailand, triggering debate over whether the celebrations after each goal were excessive. Carli Lloyd responded the next match by following a goal with a polite golf clap. Then Morgan stirred it up again when she scored against England and celebrated as if sipping tea, pinkie outstretched.

Now, after all the memorable drama, they will have a fourth star above the crest on the team's jerseys and a higher platform to advance their cause.

"It's something that we've worked so hard for. All of us, individually, have just faced so much adversity through this whole journey," Morgan said. "We've been tested individually and collectively so much. So to see, four years ago, us go from two to three, and now three to four, it's really a dream come true."