Sarah Fuller, who is from Wylie, Texas, came out for Vanderbilt's extra point that tied the game at 7 late in the first quarter. 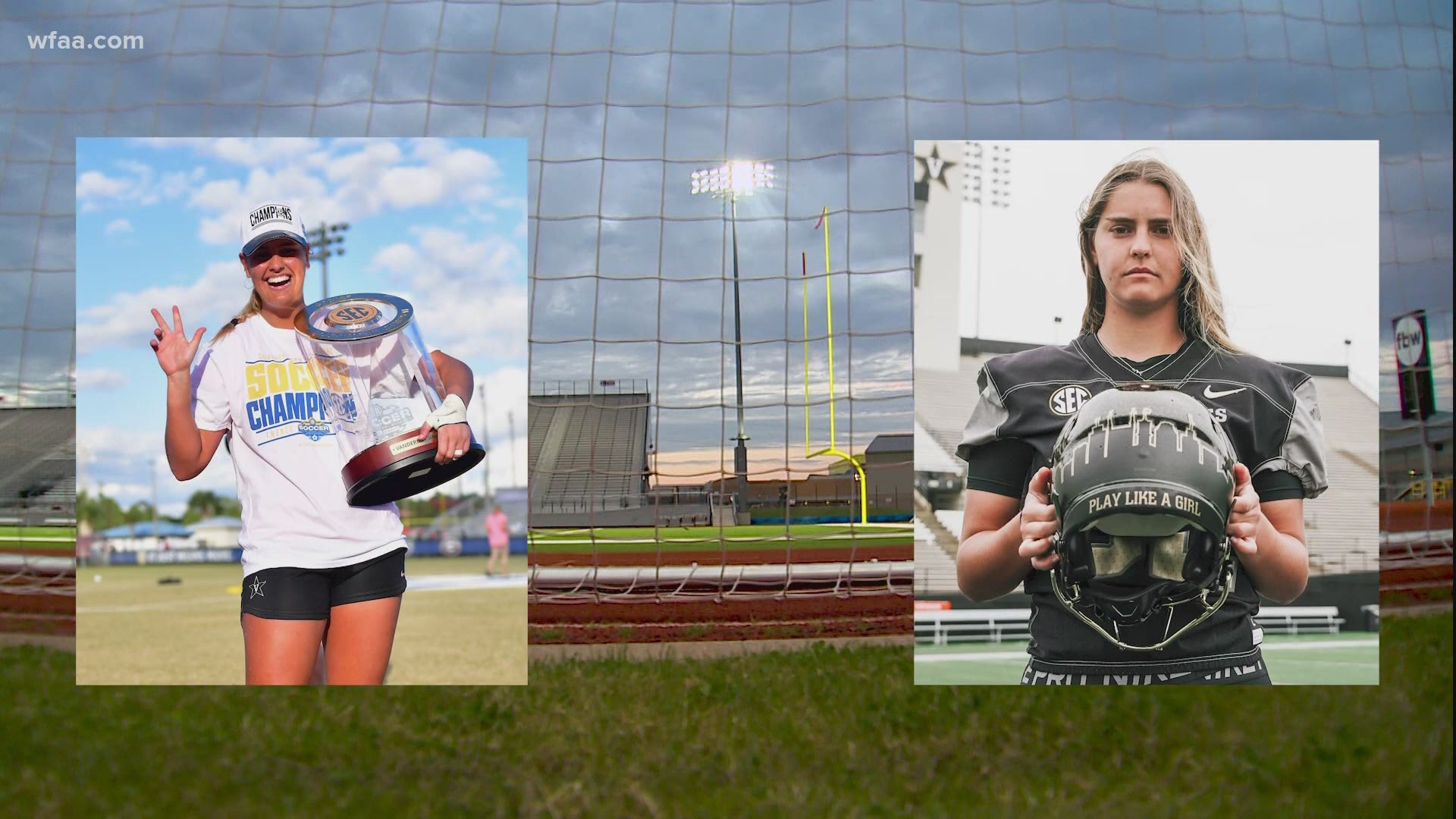 Editor's note: The video above is from November.

Sarah Fuller became the first woman to score in a Power Five conference football game, cleanly kicking a pair of extra points for Vanderbilt in a 42-17 loss to Tennessee on Saturday.

The goalkeeper for Vanderbilt's Southeastern Conference women's soccer champs made both of her kicks, to the cheers of her teammates and family.

"This whole time has been if I can do it, if I'm good enough to do it," Fuller said after the game. "It wasn't if I was a girl or not. So that's something I've really appreciated. At the end of the day, they treated me like an athlete and that's the best I could ask for."

Fuller got her historic chance with 1:50 left in the first quarter.

Listed second out of three available kickers on the depth chart, Fuller came out to try the extra point. The 6-foot-2 senior put the ball through the uprights to tie the game at 7 and celebrated by pulling her fist in before slapping high-fives with teammates.

Fuller off the field with a big smile with her family in the stands all with their arms up in the air.

Center judge Chris Garner made sure to give Fuller the ball, the official bringing it to her at the sideline.

Vanderbilt gave Fuller another chance with 7:22 left in the game. Ken Seals hit Ben Bresnahan with a 16-yard TD pass, and Fuller went back out. She kicked the extra point through as the Commodores closed to 35-17.

Fuller made history as the first female to play in a Power Five conference game on Nov. 28 with a squib kickoff to open the second half at Missouri. She has remained on the roster even as Vanderbilt's other kickers came out of quarantine and rejoined the team.

Tennessee coach Jeremy Pruitt, who had a daughter earlier this year, said it was awesome.

"She's obviously a winner," Pruitt said about Fuller. "And she walked up there and kicked it right through. So I just think it says a whole lot about her and really, kind of her fortitude to be brave enough to go do this."

The Commodores fell to 0-9 this season.

History has been made at Vanderbilt Stadium! #AnchorDown | @SarahFuller_27 pic.twitter.com/xAO2HOSeR4

No woman before Fuller had appeared in an SEC game or for any Power Five team. Liz Heaston became the first woman to score in college football with two extra points for Willamette of NAIA on Oct. 18, 1997.

Katie Hnida was the first woman to score at the Football Bowl Subdivision level with two extra points for New Mexico on Aug. 30, 2003.

April Goss was the second, with an extra point for Kent State in 2015. Tonya Butler was the first woman to kick a field goal in an NCAA game for Division II West Alabama on Sept. 13, 2003.