Las Vegas police said that at least 58 people have died and 515 are injured from the shooting. 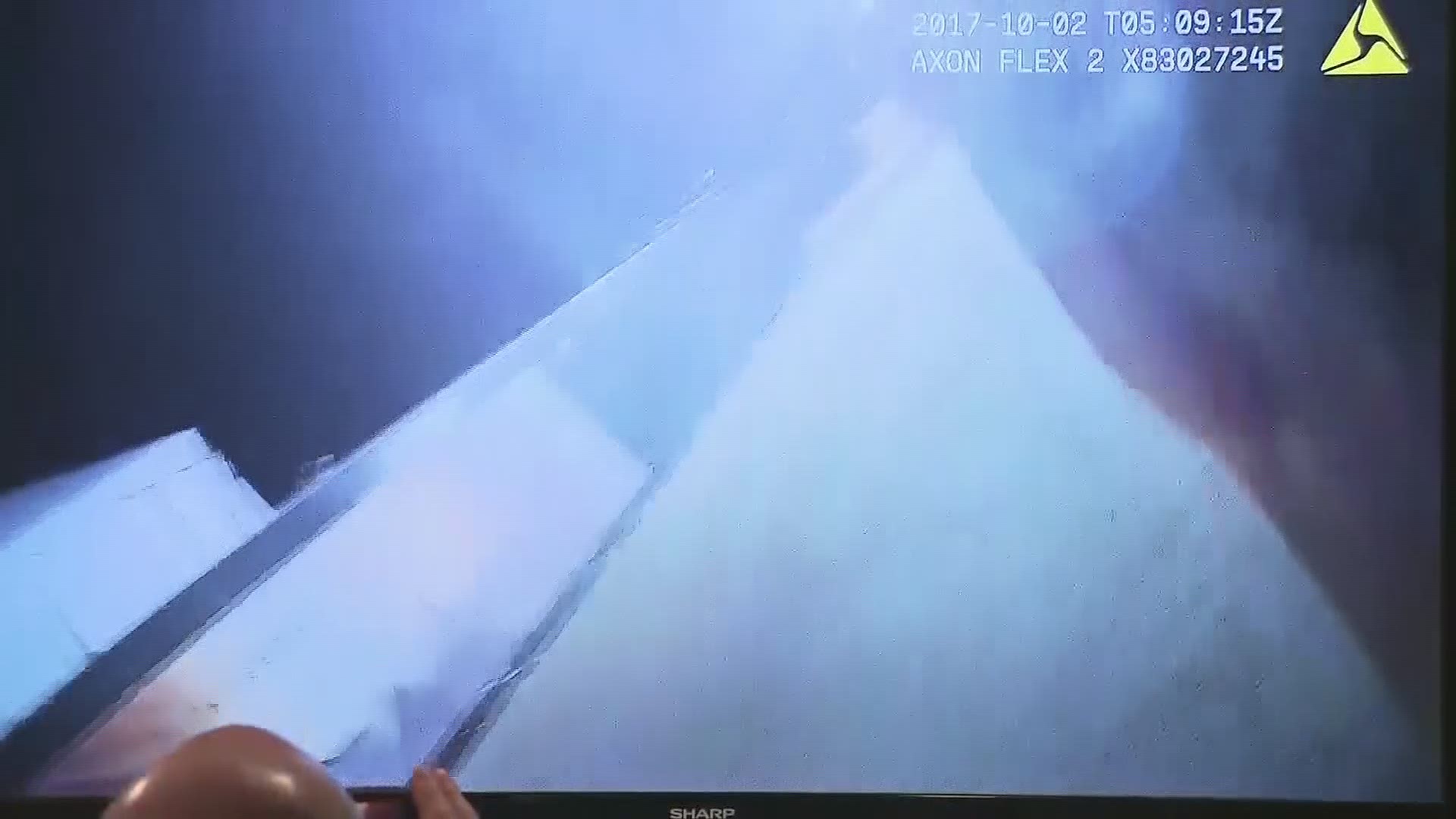 During a press conference on Tuesday afternoon, Nevada officials said they have identified all but three victims of the shooting, but still offered no information on potential motives.

A gunman opened fire from a hotel room above a packed, outdoor concert in Las Vegas early Sunday morning, killing at least 59, wounding 527 more and prompting chaos as the panicked crowd scrambled for cover amid the deadliest mass shooting in modern U.S. history.

Gunman Stephen Paddock, 64, was found dead by officers who stormed his 32nd-floor room at the Mandalay Bay Resort and Casino, said Clark County Sheriff Joe Lombardo, who announced the death toll and said it could rise.

Lombardo described Paddock, of Mesquite, Nev., as "a distraught person intent on causing mass casualties." Lombardo said Paddock was likely a "lone wolf" and that a motive for the shooting had not been determined.

"This is a crazed lunatic full of hate," Las Vegas Mayor Carolyn Goodman said. "This has been a hugely traumatic time for all of us."

President Trump addressed the nation Monday from the White House, calling the attack "an act of pure evil" and ordering flags flown at half staff. He thanked first-responders for their "miraculous" efforts and said he would visit Las Vegas on Wednesday.

LAS VEGAS, NV - OCTOBER 02: Broken windows are seen on the 32nd floor of the Mandalay Bay Resort and Casino after a lone gunman opened fired on the Route 91 Harvest country music festival on October 2, 2017 in Las Vegas, Nevada.

The three-day Route 91 Harvest festival started Friday, and Lombardo estimated that 22,000 people were in the crowd when the shooting began Sunday at about 10 p.m. local time.

The festival's headliner, country music singer Jason Aldean, was on stage when the barrage of bullets began and continued to play through the first, extended volley, video from the scene shows. The crowd appeared confused, unsure what the sound was.

The music stopped at about the same time the volley did, but after several seconds another, lengthy round of gunfire began, setting off bedlam in the crowd. Videos on social media show people ducking for cover and fleeing amid the unrelenting bombardment.

Cassie Manzanares, who was covering the festival for a Utah radio station, said she heard a "popping" noise.

"I've shot guns before, and it didn't sound like a gun," Manzanares said. "I thought maybe someone was doing firecrackers as a joke, or something happened with the pyrotechnics. But the next round (of gunfire) started, and that's when we heard the screaming."

"We jumped over the wall and there were just bodies and blood and people screaming and trying to get away," Manzanares said. "People were breaking down fences to use to carry the bodies."

My warmest condolences and sympathies to the victims and families of the terrible Las Vegas shooting. God bless you!

Justin Zimmerman, of Dexter, Iowa, said he was with four friends when the carnage began.

"I left my friends to go get more beer, then you heard a distinct 'Pop! Pop! Pop! Pop!,'" he said. "(I) thought it was the sound guy messing up, but you learn quickly it's actual gunfire."

He said he, too, froze and then hit the ground. Eventually he ran to the safety of a nearby casino.

Among the victims was Sonny Melton, 29, a registered nurse from Big Sandy, Tenn. "He saved my life," his wife, Heather, said. "He grabbed me from behind and started running when I felt him get shot in the back."

Aldean confirmed that he and the rest of his team were safe.

"Tonight has been beyond horrific," Aldean posted on Instagram. "It hurts my heart that this would happen to anyone who was just coming out to enjoy what should have been a fun night."

"We have no idea what his belief system was," Lombardo said. "We believe he was the sole aggressor."

Authorities were reviewing the recent transfers of large amounts of money involving the suspect and the possible relationship to gambling activities, a federal law enforcement official said. The official, who was not authorized to comment publicly, said the review is part of wide-ranging search for a possible motive in the attack.

Lombardo said Paddock checked into the hotel Thursday. He said that when the shooting started, authorities could see the gunfire was coming from Mandalay Bay. Employees and guests helped direct officers to the room. Officers used explosives to "breach" the door and found Paddock's body.

At least 23 weapons, many of them rifles, were found inside Paddock’s hotel room, officials announced Monday. The ATF recovered a total of 47 guns owned by Paddock, including those recovered at his home.

The official, who has been briefed on the matter but is not authorized to comment publicly, said that police also found two tri-pods positioned at the hotel windows in what appeared to be a fully-equipped sniper’s nest to take better aim at the crowd below.

Hundreds of rounds of ammunition were among the suspect’s possessions, a cache that could have sustained him in a much longer assault, the official said.

Authorities believe that the gunman, who had no serious criminal background, purchased many of the weapons legally. The ATF also announced Tuesday the shooter had devices attached to 12 weapons allowing semiautomatic rifles to mimic fully automatic gunfire.

Lombardo said authorities also searched Paddock's home and found even more weapons — 18 firearms, explosives, and unidentified electronic devices, as well as thousands of rounds of ammunition. Officials also said Tuesday they found cameras inside and outside his hotel room-- one of them in a food service cart.

Guns & Guitars, a shop in Mesquite, confirmed that Paddock had purchased guns from them in a past. Manager Chris Sullivan said all necessary background checks and procedures were followed.

"He never gave any indication or reason to believe he was unstable or unfit at any time," Sullivan said. "We are currently cooperating with the ongoing investigation."

Mesquite is a town of about 18,000 people 80 miles northeast of Las Vegas. Paddock lived in a retirement community, Sun City Mesquite, an upscale development of about 1,400 homes. The community includes an 18-hole golf course, indoor and outdoor swimming pools and a recreation center. Residents must be at least 55 years old, and no children are allowed.

Paddock's brother, Eric, who lives in East Orlando, Fla., said that to his knowledge, his brother had no history of mental illness or substance abuse. He said his brother had "nothing to do" with political or religious organizations. His brother owned guns and played high-stakes video poker, he said.

"There's absolutely no way I can even conceive that my brother would shoot a bunch of people he didn't even know," Eric Paddock said. "There's no rationale. There's nothing anywhere that said why he did this."

The FBI confirmed that the shooter’s father was a bank robber who reached the FBI’s Top Ten Most Wanted list in 1968 after escaping prison. The wanted poster described Benjamin Paddock as a "psychopath" and "very dangerous." He was recaptured 10 years later and has since died.

Lombardo said police had named Paddock's roommate, Marilou Danley, as a person of interest. She is out of the country, and Lombardo said she will be questioned further upon her return.

City officials urged local residents to donate blood as blood drives organized across the city drew long lines. Kay Anne Johnson, 32, who has lived in Las Vegas for about six years, said she fell asleep before she knew the extent of the shooting spree. Her husband woke her at 5 a.m. with the tragic news.

"At that point, you aren't going back to sleep, she said. "You get up and try to find a way to help."

Pope Francis expressed his “spiritual closeness” to victims and promised his prayers in a telegram addressed to the Bishop Joseph Anthony Pepe of Las Vegas.

"We are angry, we are grieving," he said. "We're confused. People are hurting."