In a letter to the Japanese prime minister, Gov. Greg Abbott said that the company had all the permits needed, but later he had to backtrack. 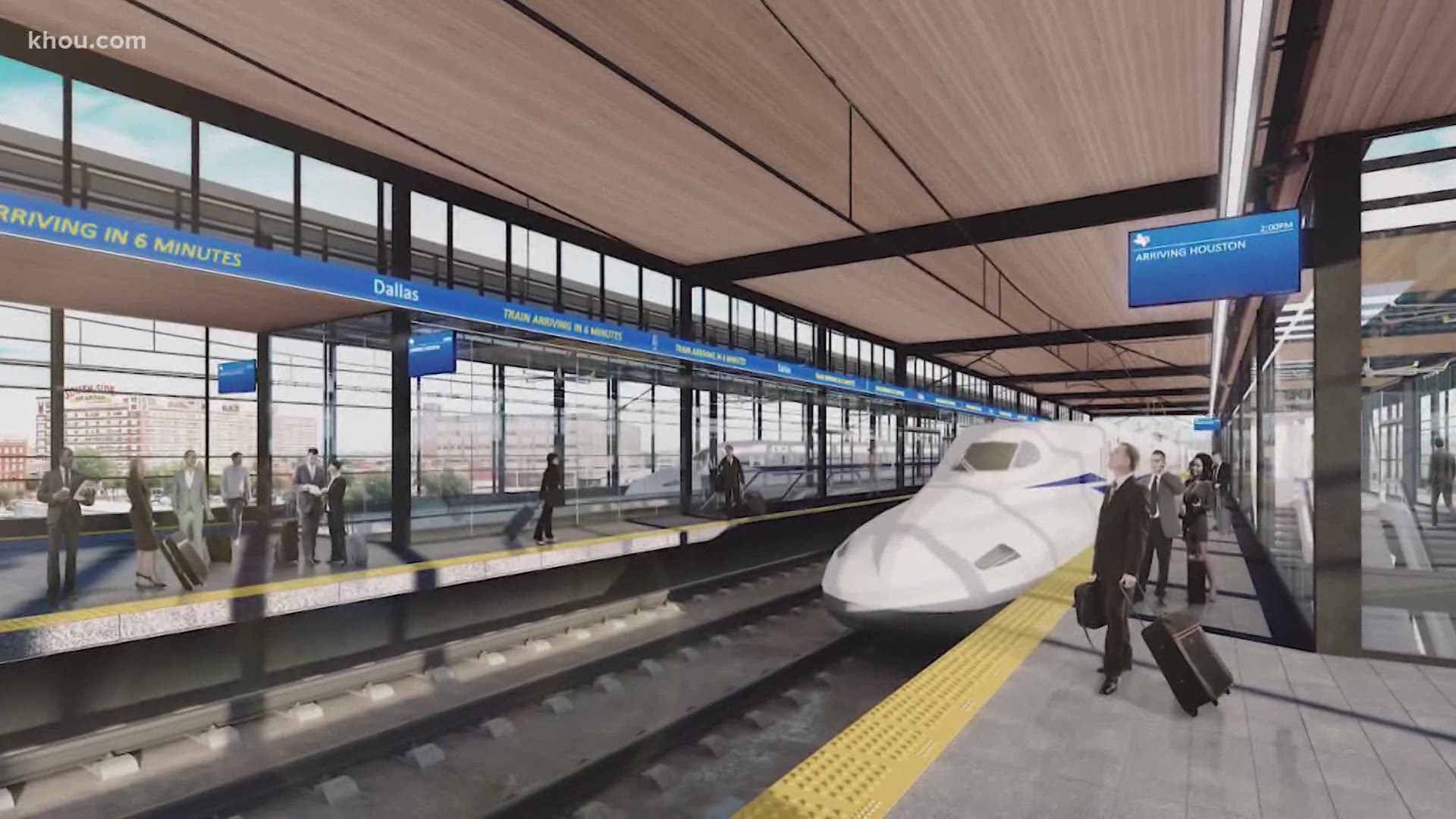 DALLAS — Less than two months before the Texas Legislature begins its next session, the years-long battle over a controversial high-speed rail project is expected to spark more legislative skirmishes.

And after years of public skepticism, Gov. Greg Abbott recently signaled his support for the project in a letter to Japan’s prime minister, although his spokesperson later said that Abbott’s office will “re-evaluate this matter.”

Last month, Abbott sent a letter to Japanese Prime Minister Yoshihide Suga saying: “This venture has my full support as Governor of Texas, and I am hopeful that final negotiations of this project with Japan can be concluded so that construction can begin. Public support and momentum are on our side, and this project can be completed swiftly.”

The Oct. 2 letter also included a significant error. Abbott told Suga that the company developing the high-speed rail line had “all the necessary permits to begin construction.”

The Texas Tribune found that Texas Central, the Dallas- and Houston-based company in charge of the project, is far from receiving all permits needed to build the 240-mile line, which would stretch from Dallas to Houston and cost around $20 billion, according to the company. When contacted by the Tribune with this information, Abbott’s office said it would review the matter.

“From the beginning of this project, the Governor made clear that he could support this project if, and only if, the private property rights of Texans are fully respected,” Abbott spokesman John Wittman told the Tribune on Oct. 7.

“The Governor’s team has learned that the information it was provided was incomplete. As a result, the Governor’s Office will re-evaluate this matter after gathering additional information from all affected parties,” Wittman added.

The governor’s office has not responded to multiple follow-up questions about the results of its review and has not explained why Abbott didn’t know the project lacked permits or who Abbott was relying upon for information about the project.

Abbott’s office also has declined to say whether he has sent subsequent correspondence to Suga. Texas Central plans to use Japanese technology similar to that used for the famous Shinkansen bullet train and the company could receive a loan from a Japanese public financial institution.

During a September 2019 trip to Japan, Abbott rode the bullet train and signed a memorandum of understanding with the Japan Bank for International Cooperation that would promote collaboration between the two regions. The bank had signed an agreement with Texas Central in August 2018 that would provide a loan of up to $300 million to the company.

Abbott had previously preached caution about the project. In 2016, at a Greater Waco Chamber of Commerce gathering, Abbott said that these kinds of projects cannot be a “money-losing proposition.” During the 2017 legislative session, he signed a bill prohibiting the state from funding high-speed rail projects.

But his October letter to the Japanese prime minister alarmed some lawmakers whose districts are in the path of the proposed rail line.

“Naturally, I was disappointed to see the letter because it expressed support for the project based on what I knew to be inaccurate information,” state Rep. Ben Leman, R-Anderson, said in an interview last month. Abbott “clarified that and I'm extremely appreciative of that.”

Other lawmakers plan to file legislation to slam the brakes on the project.

State Rep. Steve Toth, R-The Woodlands, has filed a bill that would forbid state agencies, like the Texas Department of Transportation, from giving permits to high-speed rail projects if the federal approvals and permits have not been secured yet.

“What we're saying is that until Texas high speed rail gets all of its approvals from the federal government, TxDOT can't waste any time, energy, attention, manpower, money,” Toth said.

Kyle Workman, president of Texans Against High-Speed Rail, said that he expects to see similar bills filed as well.

“I can't disclose all of our game plans,” Workman said. “But the reality of it is that we are prepared… to propose legislation to protect the citizens of the state of Texas, both in terms of their private property rights and the taxpayer subsidy that is inevitable and protect their tax dollars.”

Texas Central declined to respond to questions from the Tribune, but CEO Carlos Aguilar issued a statement saying the company is "now focused on finalizing financing and getting ready for execution."

The Texas Central high-speed rail project has been in the works for more than eight years, and the company has promised to fund the project with the support of private investors and without public funds. But critics have said that the cost will be higher than $20 billion and that it can’t be built without public support.

The project has received support from leaders of urban areas, like the mayors of Dallas and Houston, but has encountered hard resistance in the rural counties on its path. Landowners, rancher associations and local elected officials have criticized the project and said they oppose the use of eminent domain to take private land for the project.

Texas Central has said that it plans to start construction by the first half of 2021 and that it has already secured sites for stations in Dallas, Houston and the Brazos Valley.

But the Tribune found that Texas Central still hasn’t applied for a key permit from the federal Surface Transportation Board, which regulates transportation projects, for the construction and operation of the proposed rail line, according to an STB spokesperson.

And two Texas agencies, the Texas General Land Office and the Texas Commission on Environmental Quality, said they haven’t received all the necessary permit applications from the company, including the route proposal and a permit to discharge stormwater during the construction process.

A third agency, the Texas Department of Transportation, must approve permits for the rail line to cross state roads during construction, but a spokesperson said the agency would consider any proposals from the company only after the STB approves the project.

The company did receive two key approvals in September from the Federal Railway Administration, which provided the regulatory framework and the environmental review for the high-speed train. The railway administration explained that these rulings covered several of the permits needed by the project in areas like railroad safety, protection of parkland and protection of cultural resources.

Meanwhile, Texas Central is still trying to secure the land along the proposed route. Texas Central says it has secured more than 600 parcels covering about 40% of the lots — not the land — it needs for the project.

The company has said it could use eminent domain to take the land it needs for the rail line, but a Leon County landowner has sued the company, claiming Texas Central is not an “operating railroad” and that would be a “critical limitation on the eminent domain authority.”

After losing in the Leon County district court, the company won in the 13th Court of Appeals in May. The Texas Supreme Court is expected to decide whether to hear the case in the next few months.

Leman, who has been one of the main elected officials leading opposition to the project, said that when eminent domain is used in other ways in Texas, such as for pipelines, electrical transmission lines or roads, a state agency regulates whether eminent domain authority is needed. But that’s not the case with high-speed rail, he said.

When other companies tried to bring high-speed rail to Texas in the 1980s, Texas created a regulatory agency, the Texas High-Speed Rail Authority. But that agency was ultimately dissolved after those projects failed.

“There is no state agency authorized by statute to have general regulatory authority over the high speed rail in Texas,” Leman said. “So landowners have no one to turn to, no one, no agency.

“This is not about being against eminent domain,” Leman added. “This is about having an appropriate process where landowners are treated fairly.”

For the last four legislative sessions,Texas lawmakers have been trying to pass laws to regulate high-speed rail projects.

In the 2019 session, at least seven bills were filed including measures to limit surveying land for high-speed rail until funding for the project is secured, allow landowners to repurchase land taken under eminent domain if the project fails, and give county governments authority to stop construction of a high-speed rail project in their jurisdiction until they approve any necessary county road alterations needed.

None of them got to Abbott’s desk. But legislators expect a new batch of rail-related bills to be filed when lawmakers return to session in January, including some of the same measures that died two years ago.

Toth, the only lawmaker who has filed a bill focused on high-speed rail so far for 2021, said that as a member of the House Appropriations Committee, he is going to be watching to ensure that no state money is spent on the project.

State Rep. Terry Canales, D-Edinburg, who is the chair of the Transportation Committee in the House, said that there are “a lot of legitimate concerns surrounding this project.”

“Protections for Texas landowners is a high priority for a lot of legislators, including me, and I am sure there is more we can continue to do to protect property owner rights,” Canales said. “As the project moves forward, it is essential that Texans are given the truth and that the entity involved is transparent at every step of the way.”

Disclosure: The Greater Waco Chamber, Texas Central and the Texas General Land Office have been financial supporters of The Texas Tribune, a nonprofit, nonpartisan news organization that is funded in part by donations from members, foundations and corporate sponsors. Financial supporters play no role in the Tribune's journalism. Find a complete list of them here.

This article was originally published to the Texas Tribune website. Click here to find this and other stories.