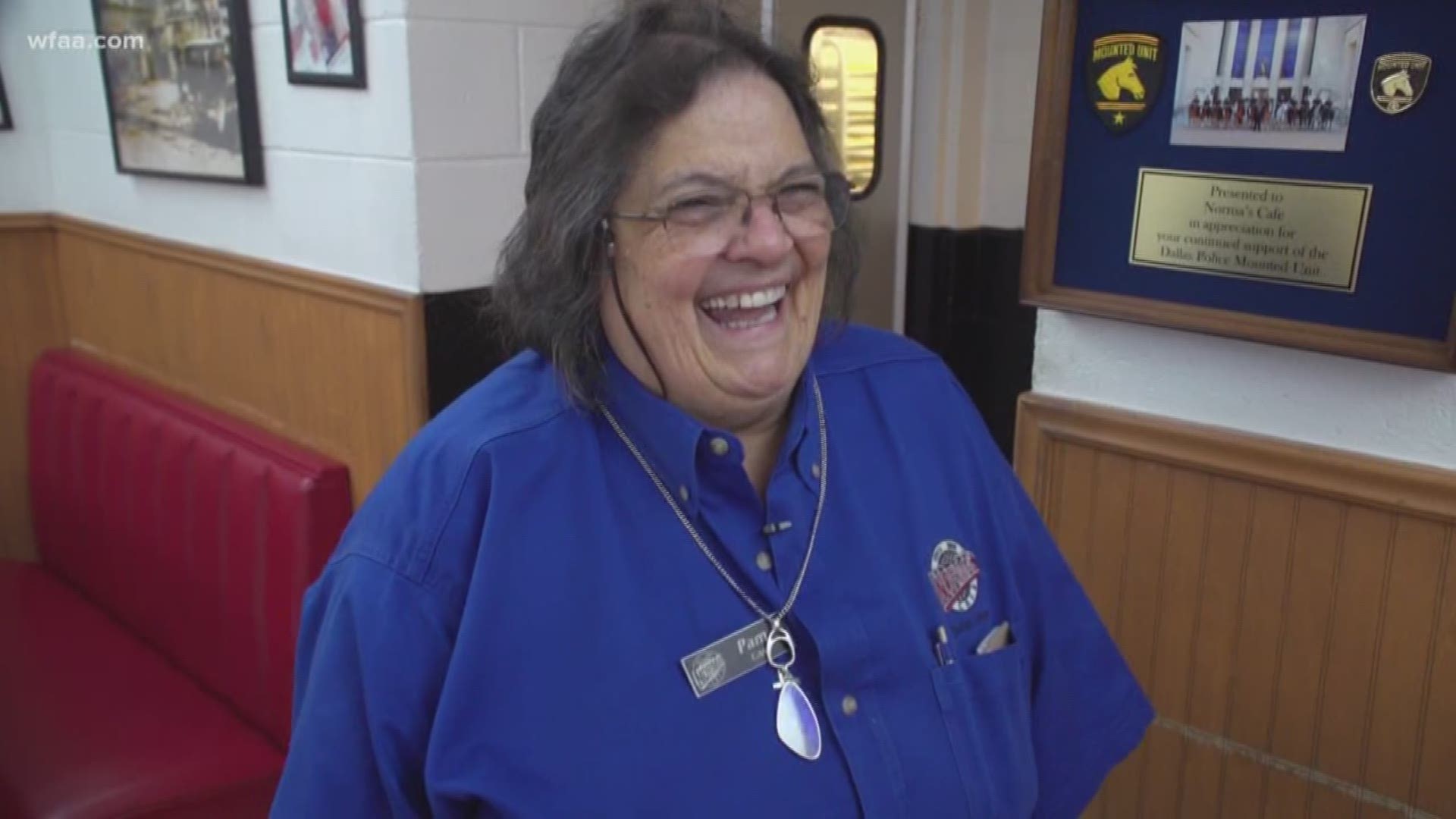 For the last four months WFAA has been asking viewers about the "Rise and Shiners" in their lives, people who get up before the sun to make the world a better place. On Friday May 11 the station honored its newest recipient, Pam Spell.

Just about everyone in Dallas' historic Oak Cliff neighborhood seems to know Pam and they all agree no one deserves to be honored more than her. Spell is the general manager at Norma's Cafe and has been serving stick to your ribs comfort food for the last 26 years. She also takes care of her community. Over the years she has collected thousands of presents for low income kids, has served thousands of meals to people without a place to go on Thanksgiving, but more than anything she is passionate about giving back to fire fighters and police.

"I just love a man in uniform," Spell said.

The love is mutual. That's why firefighters and police officers from Dallas, Plano and DART rearranged their schedules to arrive at Victory Plaza by 4:45 a.m. to give Spell the surprise of her life.

Spell and the rest of Norma's came out early to help serve breakfast during a phone bank to raise money for fallen officers and their families, but the longtime manager had no idea she was also there to be honored.

The first responders gathered to let Spell know just what her dedication and love means to them. Giving her a public thanks for all the work she's done behind scenes for the last three decades.

"She's just always there. I rearranged a doctor's appointment because I couldn't miss this. Pam has done that much for us," said Albert Garcia, a firefighter in Dallas.

Sam and Paulette Thompson aren't first responders but they couldn't miss the big reveal. The couple an hour from Corsicana to be by Pam's side.

"Pam is as true as the north star," Thompson said.

The Thomspon's son Brent was one of Pam's regulars at Norma's. He was also one of the five police officers killed in the July ambush in downtown Dallas in 2016. After Brent's death Pam created a wall in his honor at the cafe and placed a plaque on the chair where he would always sit.

"When I sit in that chair I don't feel tragedy. I feel the good times he had right here with Pam," Thompson said.

The Thompsons didn't meet Pam until after Brent's death but say she has been a constant as they've moved through one of the most painful moments of their lives.

"We can go from tears to laughter. She has the power to make that change," Thompson said.

Part of the surprise included a phone bank hosted by WFAA to raise money for fallen officers and their families. All the funds raised were given in Pam's name to the Assist the Officer Foundation.

If you know of a Rise and Shiner who deserves to be honored let us know. Submit your nomination at wfaa.com/riseandshiners