A WFAA-TV analysis has determined the actual costs and possible giveaways for the proposed $1 billion, retractable-roof stadium for the Texas Rangers may be much higher than the “50-50” private-public partnership touted by City of Arlington officials. 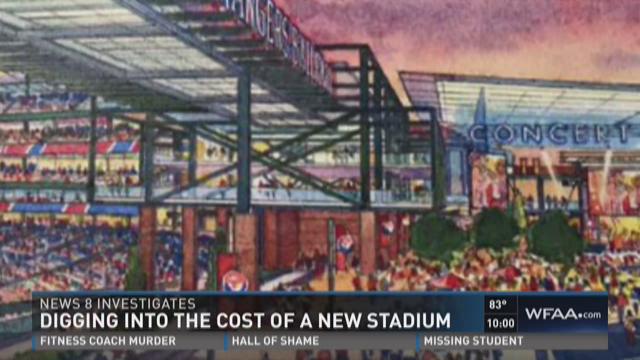 DALLAS -- A WFAA-TV analysis has determined the actual costs and possible giveaways for the proposed $1 billion, retractable-roof stadium for the Texas Rangers may be much higher than the “50-50” private-public partnership touted by City of Arlington officials.

WFAA-TV became the only media outlet to challenge the “50-50” claim four months ago, with City of Arlington officials and other media disputing the News 8 report.

After further analysis, News 8 Investigates now has found its prior cost estimate to be too low. Instead, the actual cost and lost revenues to the city of Arlington may be closer to $1.675 billion over 30 years -- at least three times more than the $500 million price tag that city officials have told citizens.

The analysis comes as a new poll commissioned by WFAA-TV and the Star-Telegram found the vote on the proposed stadium to be a dead heat, at 42 percent for each side. Another 16 percent of Arlington residents remain uncertain, the poll shows.

Prior polls by the pro- and anti-stadium campaigns touted findings declaring their side ahead.

In May, the Arlington City Council unanimously approved a “Master Agreement” for a new Rangers stadium and are asking voters to extend sales, car rental, and hotel occupancy taxes that have been used to build AT&T Stadium, home to the Dallas Cowboys.

City officials pledged that Arlington would pay no more than half the cost of the proposed stadium.

A new WFAA-TV review, however, has found various lost revenue streams, or giveaways, not included in our June story. They include:

• Stadium seat licenses: These licenses may be retained by the Rangers, with an estimated value of $75 million over 30 years.

WFAA-TV also projects that Arlington will pay hundreds of millions in interest by borrowing $500 million in city bond debt, which is a conservative estimate.

“Projections are exceedingly early, but it is estimated that $500 million in city bond debt would cost $900 million to $1.1 billion over 30 years, when accounting for fees and interest,” Arlington city spokeswoman Susan Schrock wrote in response to questions from WFAA-TV. “All this is dependent upon interest rates at the time of a bond sale.”

In June, News 8 reported that the city's agreement with the Rangers allows for an “admissions and parking tax” giveaway. The tax includes a 10-percent surcharge on event tickets, and up to $3 additional surcharge on parking. Instead of Arlington keeping those taxes to defray its share of stadium costs -- as first envisioned by state lawmakers -- the city will allow the Rangers to use the admissions and parking tax revenue to help pay their share of the construction costs.

City officials have claimed visitors pay the majority of the admissions and parking taxes, and that those monies should not count as lost city revenue. But various experts contacted by News 8 say it doesn’t matter who pays it -- a tax is money meant for Arlington city coffers.

“If it really is a tax and could be used by the municipality then, in essence, it’s just transferring revenue from the public sector to the private sector,” said Rick Eckstein, a Villanova University professor who studies sports stadium economics.

All told, the WFAA-TV projected price tag – including construction costs, interest on loans, lost revenue and giveaways – for Arlington totals $1.675 billion over the next three decades.

“This is totally one-sided,” said Arlington attorney Jim Runzheimer. “This has to be close the best deal ever cut in favor of a professional sports franchise and a government entity. It’s incomprehensible.”

WFAA-TV requested interviews beginning three weeks ago with Arlington Mayor Jeff Williams and Michael Jacobson, head of the Arlington Chamber. Both have been critical of News 8’s previous reporting on the proposed new stadium’s finances.

Both declined to sit down and discuss our findings in a formal interview, or discuss their own cost estimates.

Unlike the WFAA-TV estimate, the political group’s estimate did not include the cost of giving naming rights to the Rangers, and the city’s possible loss of seat licenses – amounting to about $300 million that could be used to pay off public debt.

While the “Vote Yes!” estimate acknowledges Arlington will need to pay interest on the $500 million bond, it projects bond interest costs at $165 million over 20 years, rather than the more conservative $500 million interest fees over 30 years – an estimate provided by the city.

A look at the numbers from our coverage.