A Southlake couple with famous political ties to Africa was in federal court on Thursday over a criminal complaint filed against them for charges of forced labor. 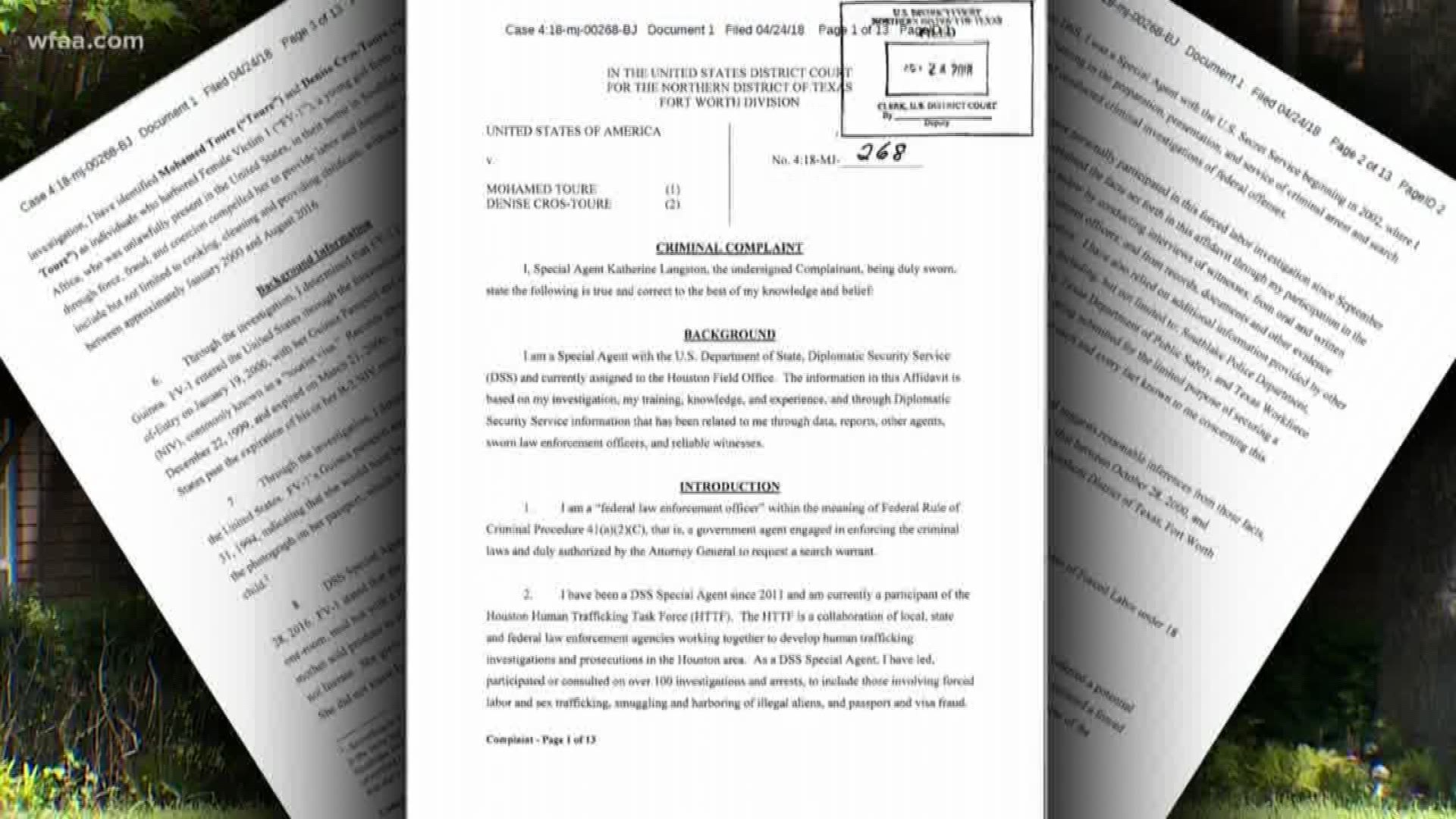 FORT WORTH -- A North Texas couple with direct ties to a political dynasty in Africa was in federal court on Thursday over allegations of forced labor, according to the family's attorney and court documents.

The affidavit filed with a federal DOJ complaint states that Mohamed Toure, 57, and Denise Cros-Toure, 57, got the victim, who could've been as young as five years old at the time and didn't speak English, to travel alone to Southlake from her home village in the Republic of Guinea in West Africa in January 2000 to work for the defendants.

Until the victim escaped in August 2016 with the help of former neighbors, she was forced to perform labor for long hours without pay, the documents state.

"The defendants required her to cook, clean, do the laundry, perform yard work, and paint, as well as care for their five children," the affidavit states. "Although the victim was close in age to the children, the defendants denied her access to schooling and the other opportunities afforded to their children."

The victim's documents were also taken away after her visa expired, causing her to remain in the U.S. unlawfully. She was also isolated from her family and abused emotionally and physically, the affidavit said, including assaults by "...belt or electrical cord."

One of the family's attorneys, Scott Palmer, confirmed to WFAA that Mohamed is the son of Ahmed Sekou Toure, the first-ever president of the African nation of Guinea. He firmly ruled the impoverished nation for more than 25 years until his death in 1984, and enjoyed audiences with U.S. Presidents John Kennedy and Ronald Reagan, as well as other foreign leaders.

The complaint indicates the younger Toure and his wife, who immigrated here years ago, rake in close to $200,000 annually from "...overseas deposits."

The government now has 30 days to present the complaint against Mohamed and Denise to a grand jury for possible indictment. The maximum sentence for forced labor is 20 years in prison.

Palmer says the husband and wife are both still in jail and face a detention hearing on Monday.

A neighbor says the family introduced the girl as their niece, and she was often seen walking both alone and with the family, running errands and grabbing Starbucks.

"I'd see her sometimes," said Tracy Zavodnik. "We're always out walking the dogs and everyone is friendly. It didn't seem like anything was out of the ordinary."

The complaint says the woman broke free from the home in 2016 only after she was able to get help from neighbors. It doesn't say where she is now, or why the family's other children never said anything as they grew older.

A press conference is slated for Friday morning with Palmer.