A Second Chance for young offenders

The Dallas County Public Defender’s Office, in partnership with the Dallas City Attorney’s Office, just received a $200,000 grant from the U.S. Department of Justice to help establish the first county-municipal community court. 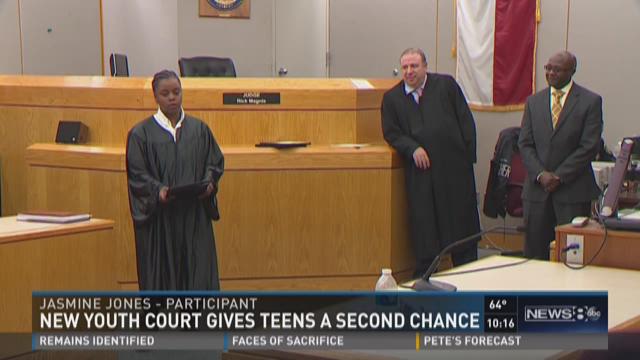 DALLAS – A unique program that is helping some young criminal offenders get a new start just got a major financial boost.

The Dallas County Public Defender’s Office, in partnership with the Dallas City Attorney’s Office, just received a $200,000 grant from the U.S. Department of Justice to help establish the first county-municipal community court.

The initiative will impact young adults in the South Dallas ZIP codes 75210 and 75215.

The area includes neighborhoods like Second Avenue and Hatcher. That location was once called one of the most dangerous neighborhoods in the State of Texas, according published studies of FBI data.

The community is a place Jasmine Jones calls home.

Jones was arrested on drug-related offenses months ago. She appeared in the 283rd Criminal District Court before Judge Rick Magnis.

Now, months later, she is one of three people graduating from a unique program the community courts supports. It is a program that is changing lives.

"I had to, like, really focus on making myself better, and want it for myself," Jones said.

Jones and the other graduates spent months cleaning up their acts in the court’s Second Chance Community Improvement Program. It is an initiative helping some non-violent offenders between the ages of 17 and 25.

"When they complete the program in six-to-nine months, we're actually dismissing their case," Judge Magnis explained.

Dismissing cases and expunging criminal records comes at the cost of community service in the neighborhoods they have harmed.

“It is providing individuals the opportunity to see themselves differently -- to dream,” said Yulise Reaves Waters, a community prosecutor. “Many of them, when they came into the program, they really didn't have a lot of goals."

Jones says she has plenty of goals now. She is working three jobs and has a new home.

The judge told the court Jones has also remained drug-free and crime-free since starting the program.