Not playing around: Here’s how North Texas is securing its piece of an expanding billion-dollar industry

The esports field has drawn in big-name Dallas businessmen, like Jerry Jones and Mark Cuban 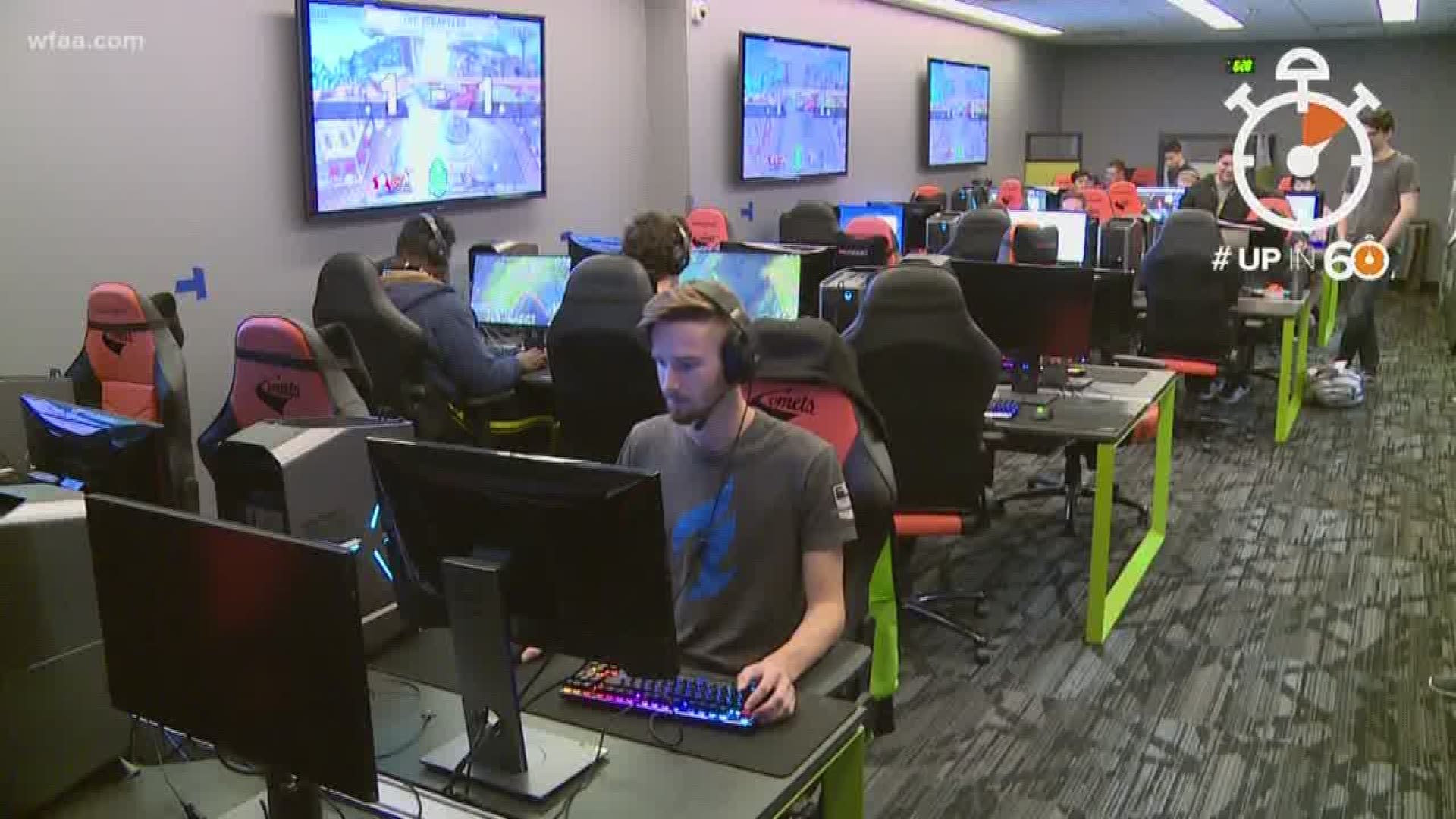 After they get off the field, the Dallas Cowboys wanted a way to relax while in Oxnard, Calif., for training camp during the preseason. The solution? Video games. The athletes would play Madden NFL, a football-simulation video game.

This year, Complexity Gaming, an esports company partially owned by Jerry Jones, sent some of its professional video game athletes to play the NFL athletes at their own game. Drini, the champion of the Madden 2018 Championship Series, is signed by Complexity and made the trip to Oxnard over the summer. The 18-year-old esport athlete beat Cowboys cornerback Jourdan Lewis in the virtual football game — while playing as Jourdan Lewis.

Esports is slated to be a billion-dollar industry in 2019 and North Texas is a hub for it.

The esports field has drawn in big-name Dallas businessmen — Jerry Jones, Mark Cuban and Neil Leibman, among others — with some investors putting eight figures into the virtual industry.

Arlington is home to a $10 million, 100,000 square feet esports facility — the largest in North America. Complexity Gaming just planted its 11,000 square foot headquarters at The Star in Frisco, including the GameStop Training Center.

The Dallas Fuel, an Overwatch League esports team owned by Envy Gaming, is slated to host home events this year — piloted the first home tournament in Overwatch League history in Allen in April. There’s room for growth, as more than 300,000 people in the Dallas-Fort Worth area have downloaded Overwatch.

Esports Award 2019, which last year more than 3 million people around the world cast their votes for, will be hosted at the Esports Stadium Arlington in November.

Physically, the presence of esports in North Texas spans across several cities.

Esports is an international industry that is estimated to have more viewership by 2021 than MLB, NBA or NHL sports. Newzoo, an esports analytics company, projects sponsorship will generate $456.7 million of revenue in 2019, contributing to a $1.1 billion revenue estimate for the year — a 26.7 percent year on year increase.

The industry is widespread, and the Dallas area is a non-coastal center for the industry.

Esports didn’t begin as a grassroots industry in any geographic area — it was in the global sphere and investors began to localize, said CMO of Complexity Gaming Cam Kelly.

Complexity Gaming, one of the oldest esports organizations in the United States, began operating in 2003, long before esports became a juggernaut. It was on the forefront of the industry, competing in competitions when they were still hosted in the basements of hotels. But the organization lagged in investors and a home base.

Kelly said Dallas is building infrastructure for esports while other cities don’t have the space to build.

In 2017, Jones and John Goff became partial owners of Complexity, and anchored the organization in Frisco at The Star. The esports organization is tied to the Cowboys in a number of ways. The esports athletes eat meals with the Cowboys, the company has a partnership with Baylor, Scott and White and the professional athletes from both organizations can play each other in games from time to time.

Kelly said the various esports events that North Texas is beginning to host are creating a more unified base of esports fans and players in the area.

“Now Esports Awards is going to be down here in November, which is really exciting,” Kelly said. “You’re bringing in international esports event to our area. They are also hosting regular home events for Overwatch league out of that [Esports Stadium Arlington]. They’re doing different conventions and game nights and stuff like that, which also fosters a community element that we really, really need.”

Envy Gaming moved to Dallas in 2017 after receiving a $35 million investment from Ken Hersh of Hersh Interactive Group.

Now Dallas-based Envy Gaming is the tenth most valuable esport company in the world, according to Forbes. The company was originally founded as just a Call of Duty team, by former esport athlete turned CEO Mike Rufail.

This year, Envy has started hosting home events, Rufail said. In April, the Dallas Fuel, the Overwatch team owned by Envy Gaming, competed in the league’s first recognized home event — and sold out all 4,500 seats both days of the tournament. Tickets were sold between $30 to $150.

“I think that is certainly one thing that will keep us on the forefront of esports as an organization, we’re constantly going to have to foster a local market,” said Rufail. “And that’s new. And that’s not the first thing we’ve really pioneered.”

In January, Envy Gaming raised $20 million according to regulatory filings. Randy Chappel, Managing Director of Hersh Interactive Group, said the company was selective in who it reached out to and allowed to invest, but mentioned that several were “notable Dallas people.”

“I have been thrilled to see the Team Envy and Dallas Fuel brands grow and am constantly impressed by the engagement we have with our fans, followers and partners,” Hersh said in a written statement. “The recent investment round is a huge vote of confidence in the future of esports and reiterates Envy Gaming’s position as one of the top esports organizations in the world.”

He also said the money would be used to fund day-to-day functions of Envy Gaming. Chappel said the Dallas Fuel will have a home season this year, playing several tournaments in Dallas.

He said the company is trying to build permanence and stability, working the long game.

Chappel added that he knows there’s enough growth in the industry that he doesn’t “lose any sleep” over whether esports will generate revenue. Because Envy Gaming is a localized brand, it’s earning is different from past esports business models.

“Right now, we’re in a period where we’re certainly having to invest and lay the foundation of what localized geo-located esports teams look like in the future,” Rufail said. “There’s certainly revenue that we’re driving and a good amount of it, but ... we obviously have to add more to our foundation. We’re working hard to do that right now.”

The game — a multiplayer, first-person shooter concept, is owned by Blizzard Entertainment, which also owns the league. There are 20 teams globally that compete against each other, across three continents and six countries.

Kelly said that first-person shooter games is the main base of the Dallas esports fan community.

Organizations and leagues also have corporate sponsors, which Newzoo estimates is nearly half the revenue of the industry in 2019. Corporate entities can form partnerships with leagues — such as T-Mobile, Toyota and State Farm with Overwatch — or with teams. Dallas Fuel was the first Overwatch team to have an official jersey sponsor, when it partnered with Jack in the Box, Chappel said.

This sponsorship on a team level is where the company can see a return on investment, he said. He said it was a good opportunity for Hersh Interactive Group to get involved in the industry.

“We like helping people build businesses and we like investing things that have a lot of growth,” Chappel said. “It was a perfect fit for us because there was a lot of really smart people in the esports business, but there were not a lot of people who had built businesses.”

With millions of dollars flowing into esports in DFW alone, major litigation areas such as infusing capital, employment manuals and more complicated topics such as immigration have become priorities for law firms.

The Esports Bar Association is a professional society for lawyers who represent esport companies or esport athletes. As esports grows as an industry, the need for lawyers — experts in the gaming regulations and laws — has grown as well.

Greenberg Traurig, an international law firm, offers a Video Game and Esports group at its Dallas office, led by esport law experts Bill Stark and Steve Walkowiak, who said the main areas of growth they were seeing were in capital management, day-to-day operations and immigration.

“Right now we’re doing quite a bit on the financial raise side. So the infusion of capital into new and existing teams for either expansion or just general growth of the team itself,” Walkowiak said.

Stark said esports is a “new animal” in sports law. Though many aspects are similar to traditional stick and ball athletics, he said the way the organizations operate and their needs vary dramatically from a typical manufacturing or sports client.

What the lawyers said was most surprising about the industry was how rapidly it was growing as an industry, along with the size and scope. Many different fields fall under esports, such as hospitality, immigration, education and marketing. Stark and Walkowiak didn’t even expect to get involved, but there was a client need for it in Dallas.

The University of North Texas was the first public university in the state to not only launch a collegiate esports program, but also provide scholarships to some players, said UNT esports coordinator Dylan Wray. The program, which launched in 2018, has four varsity teams for four separate games: Hearthstone, Overwatch, Rocket League and League of Legends.

UNT has invested $200,000 into the esports program — specifically the “Nest,” where the team practices and plays esports. The university will offer $20,000 worth of scholarships across 29 players this fall.

Collegiate esports are expanding across the nation, even traveling to compete against each other. Tespa, a collegiate esports conference, offers tournaments in Hearthstone and Overwatch, among others. UNT is one of the oldest Tespa chapters and offers one of the largest membership base in the southern region, per the Tespa website.

Wray said about 150 universities nationwide have varsity teams, and most across the country have club teams. At UNT, the esport athletes practice 15 to 20 hours per week on their respective game.