Their effort turned into an unbreakable bond, and a new purpose in their life. 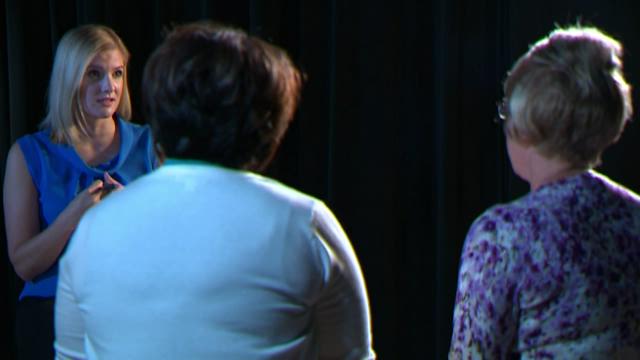 When tragedy strikes, first responders come running. We saw officers and EMT's rush to the scene of the Dallas Ambush.

But there were also first responders the cameras didn’t catch, who were safely at home that night when they heard of the news. Two women, who also came running to Parkland Hospital, and the people who suffered the greatest loss.

"That time I picked up the phone, and Dani’s like, you need to turn the TV on," said Ashlee Hardy.

"We decided we were going to Dallas," said Dani Story.

The two women say they sat with the families of fallen Dallas Police Officers Michael Smith, Michael Krol and Patrick Zamarripa through the next morning with a single, somber goal.

"One thing we wanted to absolutely convey is we are just like you," said Dani.

Wes Hardy was known for his love of writing tickets. Ashlee was his world, as were their three-year-old twins, Cora and Caitlyn. Hearing his motorcycle rumble into the garage every night meant story time and cuddles with Dad. That ended when his motorcycle collided with a car in Plano and he died. The date was July 7, 2007.

"Burying your husband at 30 and having to go through picking out a casket and flowers, it was almost like buying a car," said Ashlee. "It was absolutely the worst thing."

Craig Story would say his son John Barrett was the best looking kid you’ve ever seen, which explains why Dani says she had to fight to hold their son. John Barrett was two on January 13, 2010 when a school bus collided with Craig’s motorcycle in Arlington. He died hours after he and Dani learned they were expecting baby number 2.

"I won’t lie, I begged for God to take me," said Dani, of her darkest moments. "I even in some ways thought my child would be better off with my parents because I didn’t feel like I could do it without him. And I thought I’ll just take this baby with me and we’ll go be with Craig in heaven. That’s what I thought."

This kind of grief is something few know. A group that five families entered last July 7.

Both women let WFAA into their own experiences, to give us a sense of what it feels like inside that first year.

"Reminding myself to breathe," said Ashlee. "It wasn’t even one day at a time it was one minute at a time."

They say their only reason for getting out of bed was their kids.

"I tell my girls all the time you ate lots of McDonalds, Chick-fil-a, and you ate lots of On the Border because those were the three closest restaurants to our apartment!" said Ashlee.

And Dani found strength in Colton, who’s grown up knowing Daddy’s in heaven.

"I circled my wagons," she said. "I chose to focus on my boys and just me."

Both say they found some comfort in their early isolation. They never watched the news, which only served as a hurtful reminder. But today, they say how their husband’s death spared them a spotlight that shines brighter and longer on the Ambush.

"Ours being accidental, it wasn’t so much," said Ashlee. "The coverage lasted through the funeral and when the funeral was over, it was done."

"Families now, it’s a continual thing. Because it was so large, and so many of them at one time, there have been so many events and things that they’re invited to and asked to attend, and it gets tiring," said Dani. "They’re exhausted."

Ashlee says it took her three years to turn a corner and come out of what she called a fog. Then, she was ready to be there for Dani when she lost Craig.

That effort turned into an unbreakable bond, and a new purpose in their life. Both now serve and are active in the Metroplex chapter of Concerns of Police Survivors or C.O.P.S. And just as Ashlee reached Dani, they both keep in contact with the families of July 7 victims.

The women say they give them what they wanted after surviving the first year. Room to breathe, but with the unwavering knowledge that someone who lived their exact pain is there, when they’re ready.

"We have certainly tried to be respectful of them this week," said Dani. "But they know. And we’ll check in with them next week, when we can. We’ll keep on. We want them to have hope and know they’ll be ok too."