Voluntarily checking into psychiatric hospital, easy. Checking out? Not so much

While some people see the rise in private psychiatric hospitals in Texas as a positive, others claim the growing expansion may lead to growing patient exploitation. 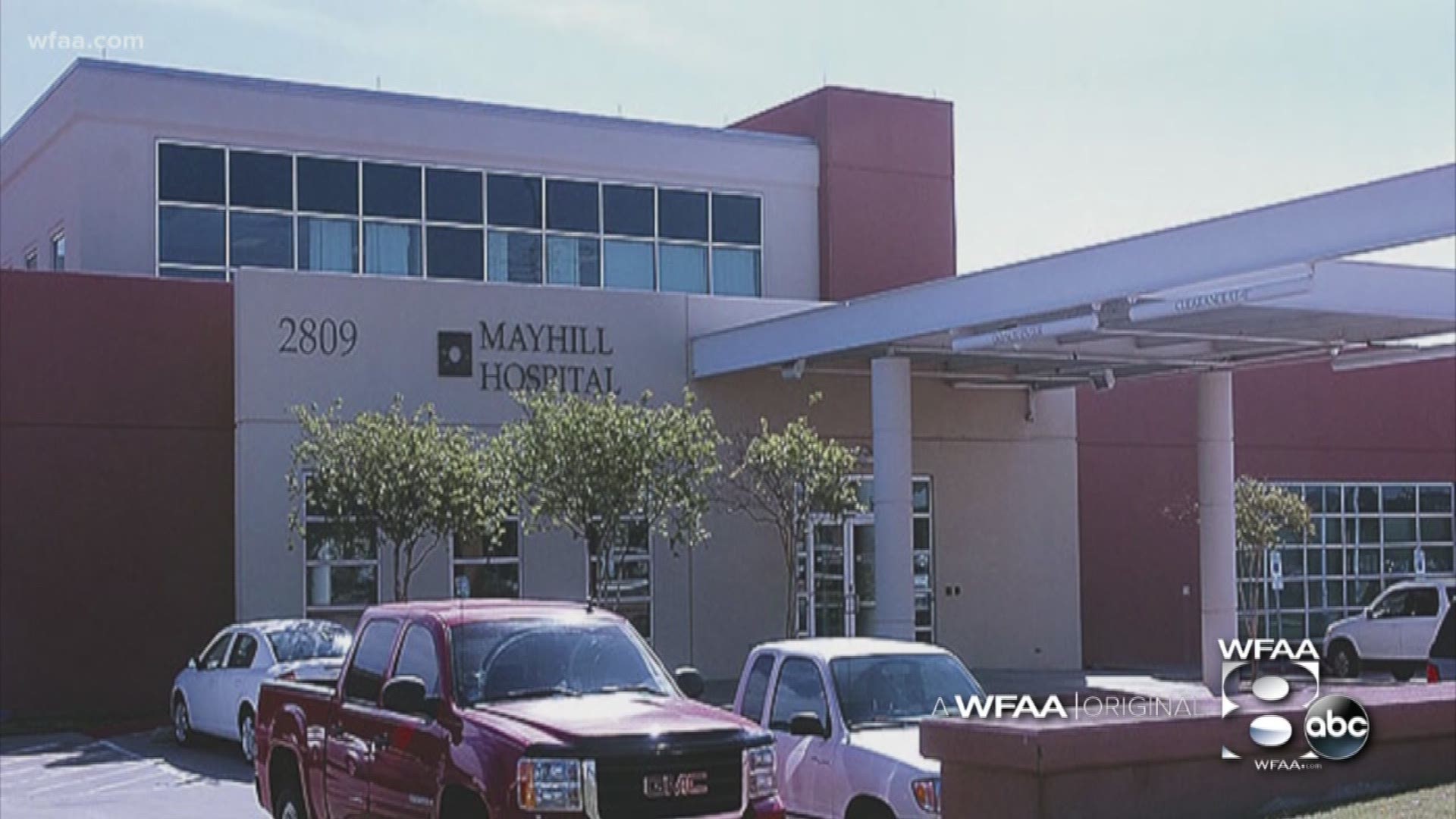 The number of private psychiatric hospitals in Texas has nearly tripled the past decade, to nearly 70. While some view that as a positive, others claim the growing expansion may lead to growing patient exploitation.

They say patients check themselves in voluntarily, yet face troubling roadblocks when attempting to check out.

One such situation occurred this past March at Mayhill Hospital in Denton, Texas. The for-profit mental health facility – on its internet site – said its mission is "to provide compassionate care to those individuals living with mental illness."

However, an internet surf for hospital reviews reveals many less flattering remarks. One mother on YELP writes this about her daughter's stay: "her health and safety were actually jeopardized by the sub-par care..."

WFAA located that mother and her husband. And, as it turns out, the family's experience was captured on video they obtained from the City of Denton. The couple: Jason and Govinda Hough live in Red Rock, Texas near Austin.

Their teen-age daughter, Madison, entered Mayhill voluntarily for depression on a Friday night. By the next day, she told staff that she wanted to leave. But rather than honoring her request, the staff threatened her.

They said 'OK, well here, you can sign the form. However, you are going to be put on a 24-hour hold in solitary confinement,’" Madison recalled.

The law also warns staff to “assist the individual in creating a written request"... to leave. Such a request must be honored.

A Denton Police report into the incident appears to confirm Madison’s concerns, saying “Madison was not allowed to sign an AMA that day and was not released from Mayhill.”

Madison said she continued to request discharge over the next several days.

Medical records appear to show her doctor signed her discharge at 9 a.m. on Monday. But even then - she was not released.

The Houghs - unaware the doctor may have already issued a discharge order for Madison - said they agreed to meet with staff to voice their concerns. They had grown increasingly frustrated by their daughter’s three-day hospital stay. They even questioned her treatment, including her placement in a geriatric ward.

Minutes prior to entering the conference room, Madison signed a letter requesting release. But the video showed the Hough family’s efforts were not proving successful, with the hospital staffer saying the facility was seeking a 24-hour hold to get a doctor to evaluate her prior to any discharge.

The meeting turned violent when Govinda attempted to take a picture of her daughter’s wrist band. The staffer jumped up, and blocked her from taking another cell phone picture, citing HIPAA concerns.

That’s when Jason said he had had enough, and began to stand up.

“My intention, at that point, was that we were going to find an attorney,” said Jason, a licensed peace officer. “My training and experience told me that this facility was breaking the law.”

"Jason stood up and the worker rushed him, grabbed his wrist and started pulling him away from the door, and was trying to shut the door at the same time," Govinda said.

“I just tried to get her (the staffer) away from the door, and I was trying to get my family out of that room, and then it turned into a violent confrontation,” Jason said.

“When she (the worker) stood up and grabbed Jason and started trying to shut the door pulling him into the room and holding onto him, and arms flailing everywhere and then hear her screaming,” Govinda said. “That’s when I knew my daughter is not safe here.”

The family struggled, then fled through the door down the hallway, and into the hospital lobby. The staff had called a “Code 10” psychiatric emergency. Staff awaited them at the front door.

Jason said he saw one staffer at the lobby door “putting his keys away and looking at him. “So, I pushed him away,’ he said.

A slowed down version of the video shows the staffer attempting to grab Madison's arm.

“My wife and Madison started getting out that door when another staff member from behind tackles me to the floor,” Jason recalled. “And then I have...there’s like three people on me.”

“I’m trying to get Madison in front of me to kind of protect her because I don’t know who else is going to attack us or her,” Govinda said. “He’s being attacked.”

“My number one concern is to get Madison away from these people who are insane,” Govinda added. “They’re absolutely insane.”

Govinda said she now believes money was behind the hospital's attempt to continue to hold Madison.

“The reason they held Madison is because we have fantastic insurance benefits, and they can bill over $1,000 a day, and they can keep her for up to what, 30 days?” Govinda said.

This summer, at another mental health hospital, Sundance Behavioral Healthcare in Garland, WFAA followed Annie Breitling’s fight to get her adult son released.

Her son checked himself in voluntarily at Sundance four days earlier. By Friday, Breitling said her son wanted to leave and signed request for release. But Saturday morning arrived, and he was still inside. That’s despite medical records that said his appearance was "cheerful" and "compliant.”

Sundance, Breitling said, wouldn’t release him or allow him to have an exit examination by the doctor.

By Monday morning, more than 48 hours after her son initially requested his release, Breitling was outraged and repeatedly asked hospital officials for her son's release.

"He should have been able to be examined by a physician within 24 hours of him signing that request paperwork on Friday night, and he was not examined by a doctor," Breitling told WFAA. "He says he did not see the doctor at all on Saturday and he's just been left here at the hospital over the weekend so they can rack up more money."

Finally, at 4:17 p.m., after five days of trying, Breitling emerged with her son, racing through the parking lot to get away. It was the same sort of emotional release Madison Hough said she felt fleeing Mayhill hospital.

Adding to the trauma, her father, Jason, was charged by the Denton County District Attorney with misdemeanor assault. He faces trial next month.

Despite police reports filed by the Hough family, Denton officials found that none of the family members had been assaulted in the conference room or lobby by Mayhill staff.

Mayhill officials have declined comment on the Hough's allegations saying the family has not authorized them to talk.

Mayhill did issue a statement that said two staff members were injured during the altercation with the Houghs.

The hospital statement also said patients “are evaluated by the clinical team that determines their needs and oversees a course of treatment.”

“Every discharge from the facility requires authorization from a physician, who has the ability to deny release based upon established parameters,’ according to the statement sent by Nichol Attar, Mayhill’s chief executive officer. “For example, a patient may be denied discharge if he or she is deemed at risk of harming themselves or others.”

The statement added: “Mayhill Hospital is dedicated to providing high quality patient care and treatment in a comfortable and safe environment.”

Attorney Martin Cirkiel said he is aware of similar concerns that voluntary patients may have difficulty gaining their discharge. He settled a lawsuit against Mayhill's sister hospital, Millwood in Arlington last December.

The lawsuit alleges his client was "held against her will" for the... "self-serving financial needs" of the hospital.

Millwood denied the allegations, but still settled the suit.

"The motivation is money, just money," Cirkiel said. "And what's particularly, in my mind sickeningly brilliant about it is it's based upon a dollar here and a dollar there."

Madison Hough said she remains bitter about having to escape a hospital she thought was there to help.

"I still wake up in a full-blown anxiety attack because I can't escape it," Madison said. “Even going to sleep at night it's terrifying because it still feels so real."

You can read Mayhill's full statement below:

Due to patient privacy laws, we are unable to discuss the care and treatment of any specific patient
without a release. However, if the family will agree to sign a release, we would welcome the opportunity to lay out the facts that transpired in this particular situation. We can confirm that two staff members at Mayhill Hospital filed police reports after being injured in an altercation on 3/27/17.

In general terms, when a patient is admitted by physician order to a behavioral health facility –
Mayhill Hospital or others – they are evaluated by the clinical team that determines their needs and
oversees a course of treatment. Every discharge from the facility requires authorization from a
physician, who has the ability to deny release based upon established parameters.

For example, a patient may be denied discharge if he or she is deemed at risk of harming themselves or others.
Mayhill Hospital is dedicated to providing high quality patient care and treatment in a comfortable
and safe environment. We proudly serve the population of Denton and surrounding areas.