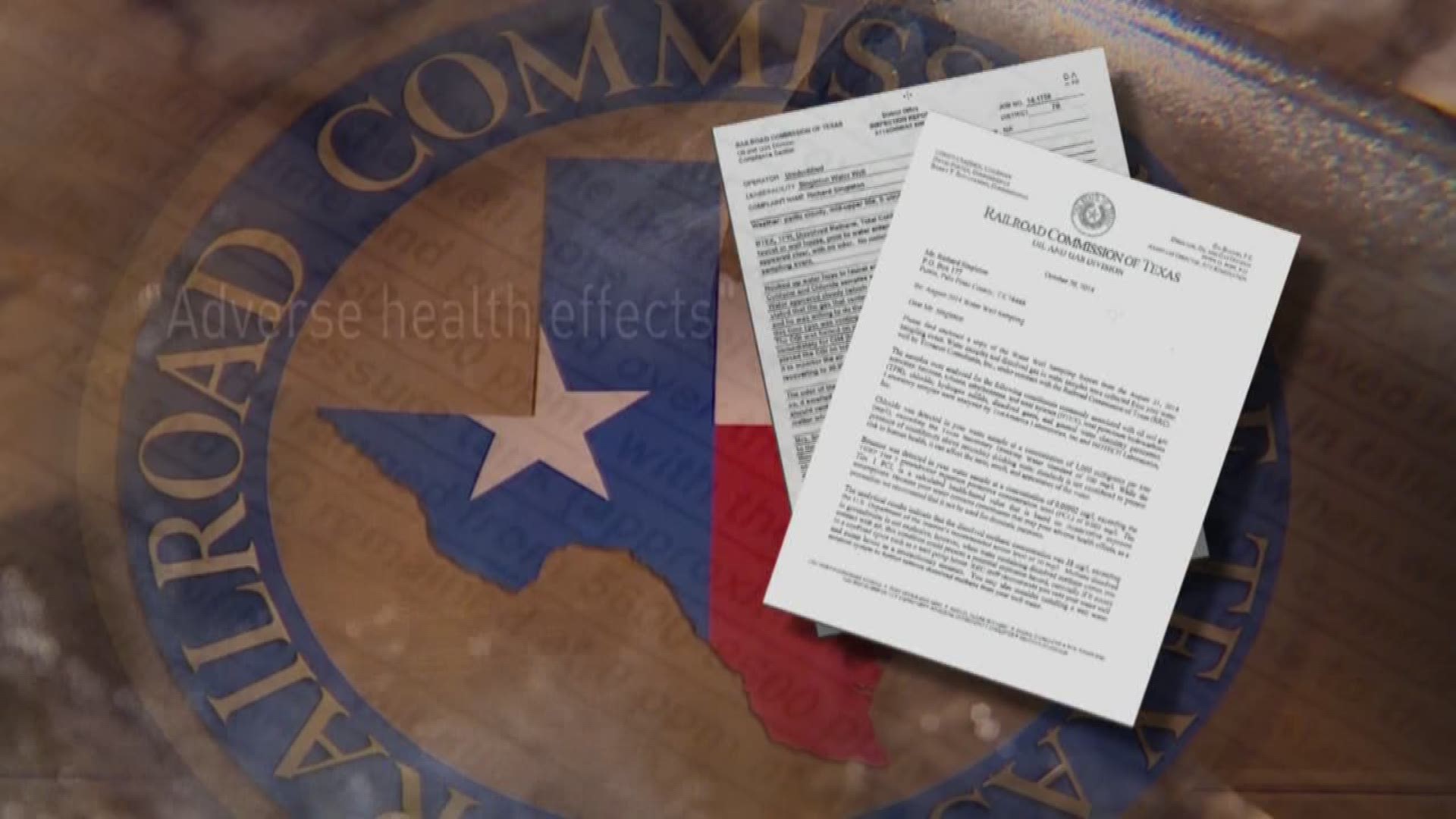 New information has surfaced in the water well explosion in the summer of 2014 injuring three members of a Palo Pinto County family.

According to new scientific studies commissioned by the family, and included in newly filed court papers, the explosion was the direct result of fracking operations a quarter mile away.

Oil and gas industry officials have long claimed there are no provable cases of aquifer contamination due to fracking operations in the U-S.

But the Murray family and their attorney say that has changed. They say tests conducted by four top scientists have established a direct link between a nearby gas well and the explosion that nearly killed them.

Cody Murray re-lived his nightmare with WFAA in 2015.

Of how a wave of natural gas came rushing up his water well a year earlier and exploded in a ball of fire, severely burning him, his father and his young daughter who was 30-feet away.

Six months earlier, the Murray's neighbors, Richard and Stella Singleton, started getting sick from ground water coming out of their faucets.

They suspected recent fracking operations just a few yards away. They contacted state oil and gas regulators at the Texas Railroad Commission who ran tests.

Investigators found excessive levels of gas in the water and concluded the Singleton's water contained chemicals that may pose "adverse health effects"... and an "explosion hazard." Six months later, a quarter mile to the east, it was the Murray's water well that exploded.

State investigators tested their water, but determined there was no connection and vowed further study. "What you can see in the video here is just super carbonated water that is saturated with methane gas that's bubbling out of the Murray's water," said Chris Hamilton, the Murray's attorney.

The video he showed News 8 is the same water that exploded in 2014. "This is an explosive gas," said Hamilton. "Large bubbles and pockets of this methane escaping from a water well, any sort of spark will start a fire."

What you can't see in the video is the chemistry. But four nationally respected scientists have seen the chemistry and done the math. Anthony Ingraffea, Ph.D., Thomas Darrah, Ph.D., Frank Schwartz, Ph.D. and Zacariah Hildenbrand, Ph.D.

They were hired as experts by the Murray's in their lawsuit against the gas well operator Fairway Resources.

Here's what they found; according to the lawsuit the gas well on the Singleton's property was not properly constructed allowing fracked gas to migrate into the aquifer. and into the Murray's water supply.

They say the chemical analysis shows the fracked gas on the Singleton's property is an exact match with the gas found in the Murray's water.

But most importantly according to the lawsuit, chemicals found in the Singleton's and the Murray's water trace back to a specific chemical additive called Chem Seal which is used in the drilling mud used to drill the well.

A recently released Sunset Advisory Commission report on the performance of the Texas Railroad Commission, however, does render some potential insight.

It's the 3rd such report since 2010, and is critical of Railroad Commission's effectiveness and operations. "The commission's lack of a strategic approach to enforcement and inability to provide information persists." The report cites: "no accurate counts of major violation", "no accurate measure of violations referred for legal enforcement action" and "(Oil and gas) operators have a reasonable expectation they will not be penalized."

The Railroad Commission has issued notices of violation in connection with the well in this case. But there is no indication any fines or administrative penalties were ever assessed.