Records obtained by WFAA indicate Collin County's Dr. Stephen Courtney is currently under investigation by the board. 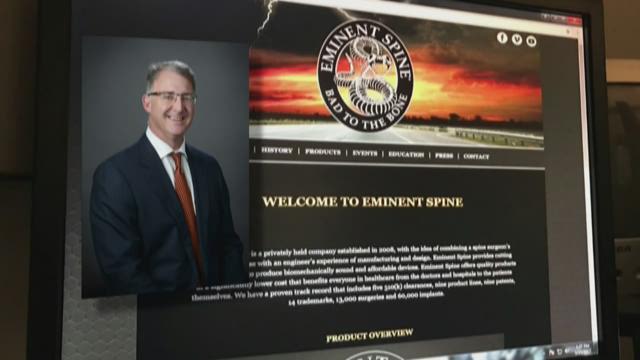 DALLAS -- In February of this year, former Dallas spine surgeon Christopher Duntsch was sentenced to life in prison for maiming patients, leaving several paralyzed and two others dead.

He was convicted of five counts of aggravated assault with a deadly weapon, and harming an elderly patient. Duntsch was the first surgeon known to be sentenced to prison for botched surgeries.

Now serious allegations are being raised about another North Texas spine doctor. Former patients filing lawsuits and complaints with the State allege their lives have been ruined by a surgeon putting profits over patient care.

A picture may be worth a thousand words, but not every picture tells the whole story.

Pictures of a smiling Steven Pennington, of Royce City, for example, mask his torture. The back pain that plagued him for 20 years and now the images of his headstone tell a final story. On July 22, 2015 Pennington took that pain to his grave.

The autopsy blames "sudden cardiac death," which occurred during his second back surgery. Pennington's family blames something else: an orthopedic surgeon once touted as Collin County's best Dr. Stephen Courtney.

The family has filed a lawsuit against Dr. Courtney for "gross negligence" and for trying to profiteer of Pennington by using his own surgical implants during surgery.

Dr. Courtney is co-founder of Eminent Spine. The company slogan on the web-site video is "Bad to the Bone."

The company designs and delivers surgical hardware such as the "Copperhead", the "King Cobra," the "Diamondback," and the "Python."

According to a video on the business' web site, Dr. Courtney, "uses the product every day, on every patient."
“Eminent Spine offers quality products at a significantly lower cost that benefits everyone in healthcare from the doctors and hospitals to the patients themselves,” the site said.

But according to multiple lawsuits and complaints on file with the Texas Medical Board, it is those devices that are being improperly and unnecessarily implanted in patient's spines.

Bryan Taylor, of Collinsville, hurt his back in November of 2014. He was diagnosed with a herniated disc and received a steroid injection.

After a few weeks, still in pain, Taylor was referred to Dr. Courtney who, according to the suit, wanted to operate using the Python.

"Obviously, he didn't follow the standard of care what the FDA clearance told him to do," Liebbe alleged.

Liebbe showed WFAA an x-ray of Bryan's back and how the Python "spacer" in Taylor's back allegedly shifted after surgery. "This is four months. Later, you can see the spacers are now tilted to the right, which indicates the spacer is moving, migrating out of place," Liebbe said.

According to Taylor's lawsuit, a few weeks later, Dr. Courtney operated on Taylor's back again re-installing the Python, again, without fixing it in place.

"Every time I had a surgery, he kept saying that this is what I need, and it's going to make it better and I trusted him," Taylor said. "It got to the point I needed something to happen."

In June of 2015, Dr. Courtney performed a third surgery on Taylor. It did not help, said Taylor, who then sought the help of a second surgeon who removed Dr. Courtney's device.

Alan Tarrant of Plano also trusted Dr. Courtney even after three failed surgeries involving Courtney implants, The Python and The Cottonmouth, which he said broke off in his spine rendering him permanently impaired.

Tarrant said he has been in constant pain, unable to work, or bend, or sit for longer than a few minutes.

"I'm 48-years old and disabled," Tarrant said. "I've got nothing to look forward to, just going backwards, never getting better."

So far, none of the complaints has resulted in disciplinary action.

Records obtained by WFAA indicate Dr. Courtney is currently under investigation by the board.

WFAA showed the records to State Representative Bill Zedler of Arlington, a frequent critic of the state Medical Board. Zedler has claimed the board has a history of waiting too long to act on complaints.

"I believe there is sufficient evidence that tells me that appointed members of the Board need to be aware of what's going on here," Zedler said.

WFAA made repeated attempts to contact Dr. Courtney. He did not respond.

In legal filings in lawsuits, his attorneys have denied all allegations of negligence and gross negligence.

As for the claims of Dr. Courtney’s alleged profiting from use of his own devices on his patients, WFAA has obtained a 2013 report by the U.S. Senate Finance Committee staff report critical of such a practice.

The report noted Congressional concern with surgeons who implant their own devices in what's known as Physician Owned Distributorships.

"P-O-Ds present an inherent conflict of interest that can put the physician's medical judgment at odds with the patient's best interests,” the report said.

Liebbe claimed the report closely mirrors the problems she has seen with Dr. Courtney's practice.

"It is definitely a conflict of interest and violates the standard of care," Liebbe said. "Our experts will testify hospitals should not allow doctors to use their own hardware in patients because it clouds the doctor's judgment because of the financial incentives."

Steve Pennington's family said they are not able to comment, but made their concerns clear in an on-line posting days after his death.

"Dr. Courtney has been unsuccessful in providing a solution to our father's pain, yet extremely successful in furthering the viability of his medical device business," the post said.

Since those surgeries, Baylor Frisco has started following the lead of several major hospital chains across the country, in most cases, prohibiting surgeons from using their own implants on patients.

The Texas Medical Board has declined to comment on their investigation into the Courtney complaints.