Jailed to death: He repeatedly asked for a doctor. Guards pepper-sprayed, beat and cuffed him.

“There is sufficient evidence of patterns, practices and failure to train,” Magistrate Judge Caroline Craven wrote in a scathing ruling.

TEXARKANA, Texas — In a scathing ruling, a federal magistrate judge concluded there’s extensive evidence that a private company’s failure to properly train its guards led to the death of an inmate inside its Bowie County jail in 2015.

The extraordinary 169-page ruling recounts in painstaking detail the treatment Michael Sabbie received over the course of four days in the Bi-State Jail in Texarkana in 2015. The jail is run by LaSalle Corrections.

“There is sufficient evidence of patterns, practices and failure to train,” Magistrate Judge Caroline Craven wrote.

Further, “Sabbie repeatedly presented to the nurses with alarming symptoms,” Craven wrote. “Yet, there is evidence they consistently failed to take his vitals, document his visits, follow the governing protocols or even look at his patient chart.”

In her ruling, the judge said it was common practice among the nurses and jailers to assume “inmates were faking or malingering.”

Sabbie, a diabetic with asthma and heart problems, had repeatedly told nurses and guards he was having trouble breathing. Guards pepper-sprayed him as he screamed, "I can't breathe." Sabbie, 35, was found dead of a heart attack on his cell floor. He was survived by his wife and three children.

The judge’s ruling ensures a federal civil rights trial will go forward next month in Texarkana. The suit names LaSalle Corrections, nine guards, two nurses, Bowie County and the city of Texarkana, Ark. as defendants. The company has denied wrongdoing.

In court filings, the company has contended that there is no evidence that the guards and nurses intended to harm Sabbie.

The company failed in its bid to have its Louisiana-based parent company removed from the lawsuit. LaSalle officials contended in court filings that the parent company only provided accounting and pay roll to the subsidiary that runs its Texas jails. The judge’s ruling noted LaSalle officials left out a page of its agreement a guaranty of obligation signed by LaSalle’s founder, William McConnell. Attorneys for Sabbie’s widow provided the court a copy of that missing page.

Sabbie’s death was one of a series of deaths featured in a WFAA investigation of jails run by LaSalle. WFAA discovered five deaths including Sabbie’s that involved jailers falsely claiming to have checked on prisoners when they had not done so. 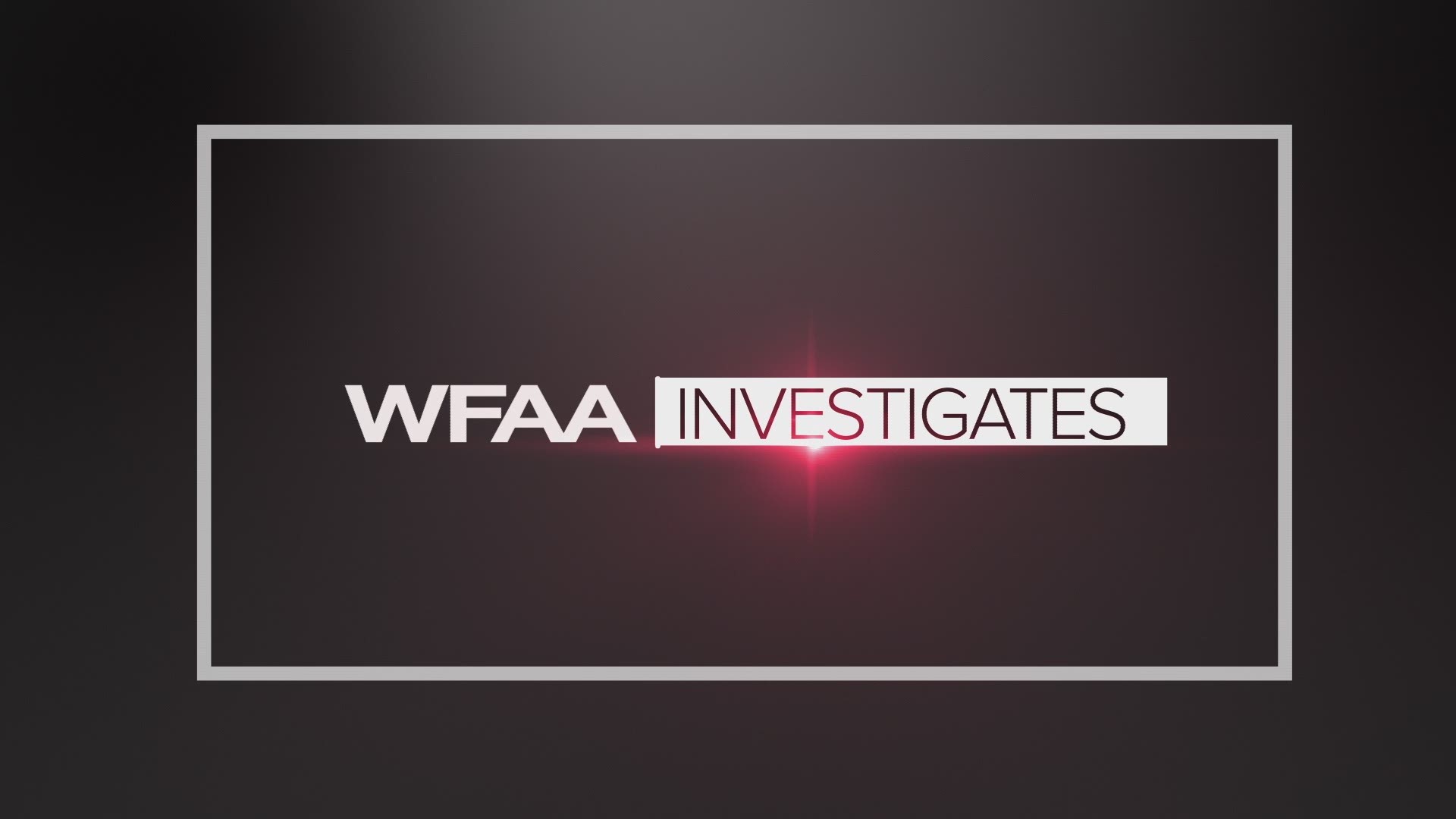 The WFAA investigation revealed LaSalle was taking advantage of a state rule that allowed jailers to work under a temporary license for up to a year with no training required. State Rep. Bill Zedler, R-Arlington, has filed legislation seeking to reduce the time that jailers can hold a temporary license to 90 days.

The events that led to Sabbie’s death began when Texarkana police arrested him July 19, 2015 on a misdemeanor verbal assault charge. He was booked into the Bi-State jail. Sabbie filled out a jail medical questionnaire stating that he had hypertension, diabetes, asthma and heart trouble. Jail medical records noted he was an insulin-diabetic who required a diabetic diet.

Sabbie’s blood pressure and insulin levels were supposed to be checked daily. That did not happen, nor was he given insulin or any other medications for any of his medical conditions, jail medical records show.

On July 20, he told nurse Mia Flint he was having trouble breathing while laying down – a symptom of impending heart failure.

The nurse also said she did not know she was supposed to check his vital signs. "I did not know it was against policy," she testified.

Flint, who had less than three months of experience, had no training on nursing protocols, had no idea they were mandatory and did not know they existed, according to the judge’s ruling. Nurses did not start following the protocols until the fall of 2016, more than a year after Sabbie’s death.

That was also after Morgan Angerbauer died in July 2016 as a result of a severe lack of insulin. A nurse was later convicted of negligent homicide in her case.

In the early morning hours of July 21, one of the guards brought Sabbie to nurse Tiffany Venable because he had told guards he was coughing up blood. She looked at the blood in the cup and decided it wasn’t the type of blood that someone would “either cough or spit up.” 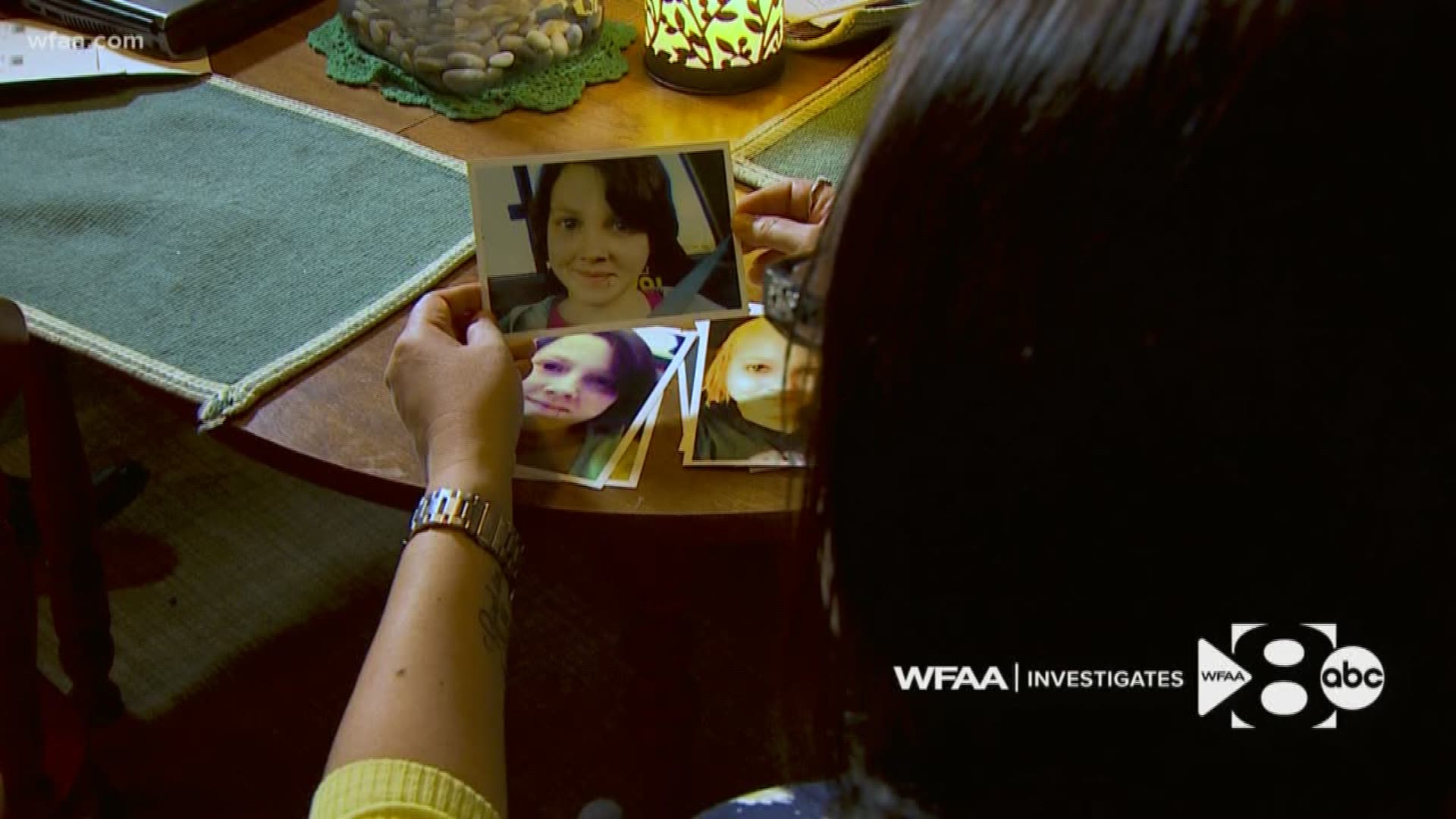 Two hours later, several guards brought him back to her office in a wheelchair. A cellmate had found him collapsed on the floor. He told them that he couldn't breathe. Venable did not take Sabbie's blood pressure or test his blood sugar levels.

A guard, however, cited Sabbie. He wrote that Sabbie had created a disturbance “by feigning illness and difficulty breathing." On the way back to his jail pod, Sabie fell to the floor. Lt. Nathaniel Johnson ordered Sabbie be picked up and taken to his pod, court records show.

That afternoon, Sabbie appeared in court. The judge and other court personnel noticed that he was in medical distress.

He told the judge that he needed to go the hospital, and that he had been spitting up blood, according to court records. But that did not happen. Instead, he was taken back to LaSalle’s jail.

The video shows him struggling to stand, leaning against a wall. His hands on are his knees, and he appears to be struggling to catch his breath. He asked to make a phone call. The jailer denied the request.

Sabbie turned and walked toward the booking area where the phone was located. The jailer grabbed him by the back of his shirt, pulled him away from the door, spun him around and threw him to the ground. Sabbie’s pants fell down as he was spun around.

Several guards piled on top of him, and he was handcuffed. He repeated over and over, “I can’t breathe.”  He did not appear to be actively resisting.

Lt. Nathaniel Johnson sprayed Sabbie, who has asthma, in the face with pepper spray. His captain, Brian Jones, stood nearby as did Venable, the nurse.

After being pepper sprayed, Sabbie was taken to the nurse’s office for a post-pepper spray exam. He says repeatedly that he can’t breathe.

The nurse examined him for less than a minute. She did not check his blood pressure or his blood sugar levels, even though the jail’s pepper spray chemical exposure protocol required she do a complete assessment.

The video then showed LaSalle guards walking Sabbie to the showers. Johnson threatened to pepper spray him again.

"I can't breathe," Sabbie said, still gasping. He can barely stand up. The inmate, still handcuffed, then fell to the wet floor.

Jones, the jail captain, said in a deposition that he heard Sabbie say he couldn’t breathe. “In my opinion, the inmate was playing his games and stuff,” he said.

Instead, guards picked him up by his handcuffed arms and escorted a gasping Sabbie to a cell. When they got him to the cell, Sabbie fell to his knees. His hands were still handcuffed behind his back. For a few seconds, Sabbie can’t be seen on the video. When he reappeared, his hands are now handcuffed in front.

One of the guards – Andrew Lomax – testified that Sabbie’s handcuffed hands were pulled over the top of his head to the front of his body – something that medical experts said would have caused severe shoulder damage and the judge concluded was evidence of “deliberate indifference.”

About an hour and half after leaving him in the cell, Sgt. Daniel Hopkins and two jailers returned to Sabbie’s cell to take pictures as required by LaSalle’s use of force policy.

The guards found him on the floor on his back. His pants were pulled down and his genitals exposed. A medical expert who reviewed the photos said it appeared that Sabbie was already dead. His body was found in the same position the next morning.

On the morning of July 22, jailers discovered Sabbie dead. He had been laying in the cell for about 12 hours. An autopsy found that he died of a heart attack. By then, he had been dead for hours.

In the photos, a white substance is coming out of his nose, which the medical expert said was most likely lung fluid.

None of the guards requested medical help. The judge concluded it was further evidence of the guards’ “deliberate indifference” to Sabbie’s deteriorating condition.

Under state regulations, jailers are supposed to check on inmates who are in a segregation cell every half hour. Two LaSalle jailers were later found to have falsified paperwork saying the checks were done when they really hadn’t been.

One of those two jailers had only been working for LaSalle for about three weeks when Sabbie died.

She testified Hopkins told her to leave Sabbie alone. Several times that night, she said she looked in the cell and saw Sabbie lying on the ground. His pants were still pulled down and his genitals were showing.

She said based on what she had been taught, she thought as long as she could “detect breathing or respiration, there was no need to call medical help,” according the judge’s ruling. 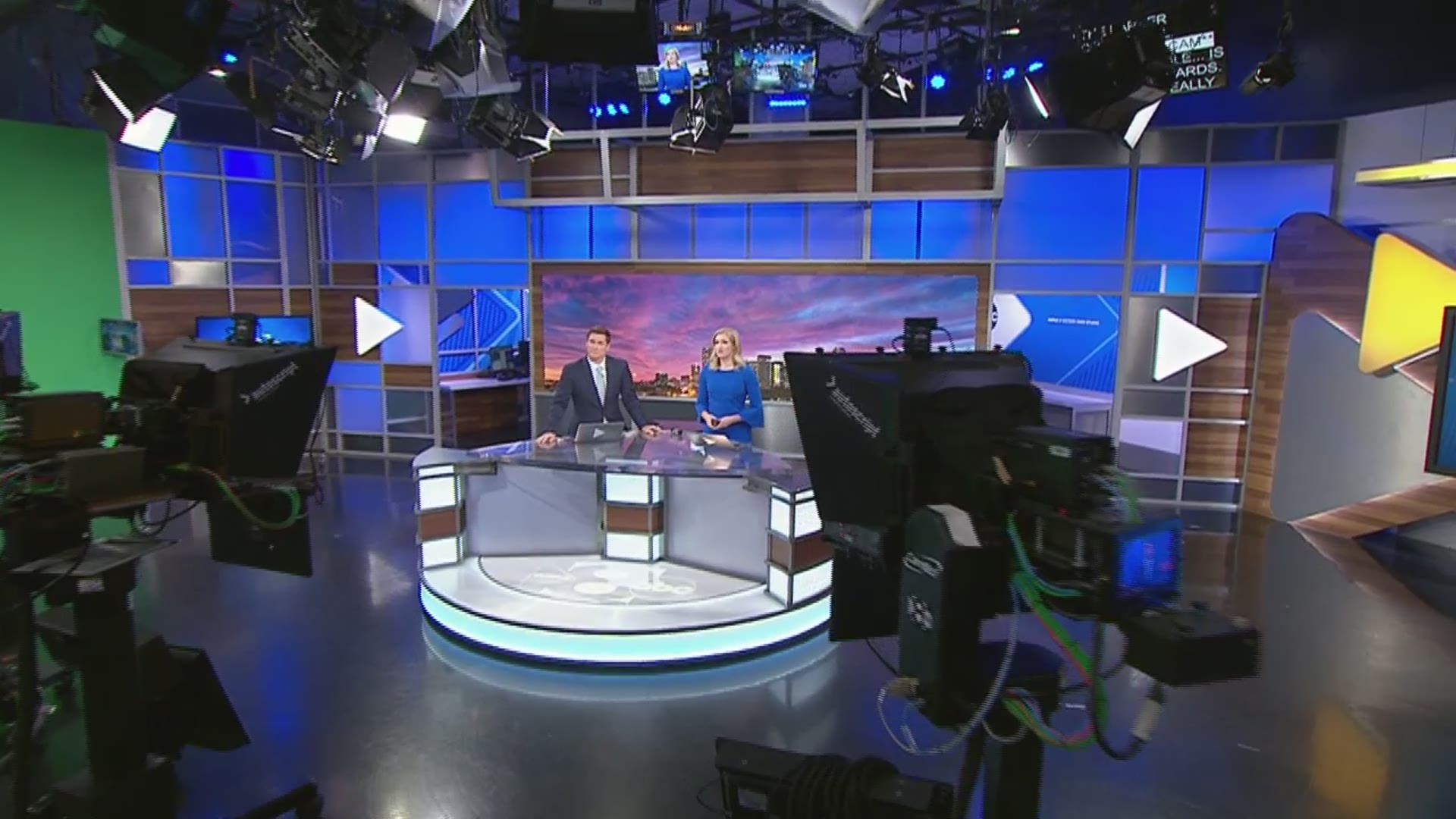 The jailer also testified she was trained to fill out paperwork saying security checks were done, even if they were not. Another jailer who was supposed to be checking on Sabbie testified that it was “normal practice” to write down checks and then leave them even if an officer did not do all of them. He said he had done it “countless times.”

Jailers testified that LaSalle gave them no training to recognize the potential signs that inmates may be in medical distress. Inmates like Sabbie who did need additional medical monitoring were placed in medical observation cells where they were monitored not by medical personnel but guards with no medical training.

“Not only is there evidence LaSalle failed to train its officers on their constitutional obligations, there is also evidence Lasalle affirmatively taught its officers not to summon care so long as the inmates were ‘alive and breathing,’” the judge wrote.

Craven rejected a motion filed by Bowie County and Texarkana, Ark. seeking to remove themselves from the lawsuit. The county and city entered into contracts with LaSalle is solely responsible for the operations of the jail. The judge concluded the city and the county cannot contract away their liability.

LaSalle took over operations of the jail in 2013. The county extended the company’s contract for another year last month.