Cops 'believed' he was a felon and put him in jail. They were wrong, and we helped fix it

A Dallas man's criminal justice nightmare began because he shares a similar name and date of birth with a felon. 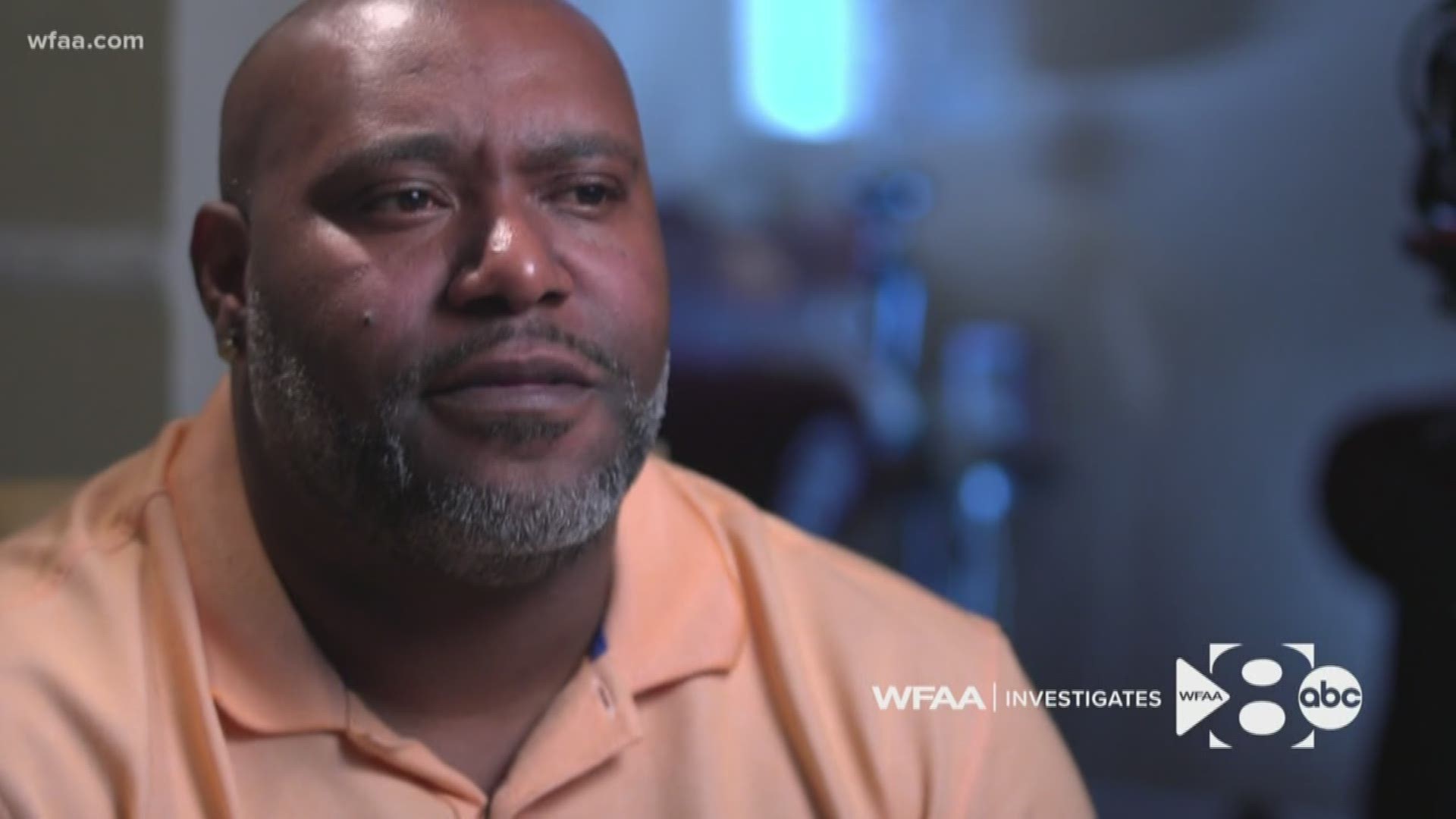 DALLAS — For years, Darrick Dionne Williams knew there was a Harris County man with a similar name and the same date of birth.

But there is one significant thing the men do not share: the other man – Derrick Deon Williams – is a felon and spent time in state prison.

Their similar names and matching dates of birth have caused the Dallas County resident problems over the years, especially when he’s had to get background checks for a new job, to rent an apartment or when he bought a gun.

“I've been going through stuff, like, half my life, trying to show that I'm not him,” he said.

The problems escalated in 2018, when Williams was arrested by Dallas police officers, who assumed he was the Harris County man and put him in jail on a charge of felon in possession of a firearm.

Officers could have quickly found out the Dallas County Darrick Williams wasn’t a felon if they had digitally checked his fingerprints. Results of those digital scans are usually available within minutes.

They also could have avoided the confusion if they had compared driver’s licenses and Social Security numbers.

But none of that happened.

In a statement to WFAA, Dallas police said the arresting officer ran Williams’ name through a law enforcement database and “believed” Williams had a felony record. Police officials declined to comment on what specific steps were taken to confirm that belief.

“My life ain’t been the same,” Williams told WFAA, months after a judge dismissed the charge against him.

He and two friends were pulled over after leaving a northwest Dallas nightclub, according to police records.

Williams had a gun in the back seat. Like many people, he bought the gun to protect himself. Because he didn’t have a license to carry, having it in public was a misdemeanor.

On a dashcam recording of the arrest, an officer is heard saying, “He actually admitted to the gun being his. … He says he’s not a felon.”

Williams had a traffic warrant, so Dallas police handcuffed him and took him to the Dallas County jail for that and unlawful possession of a firearm, a misdemeanor.

During book-in, according to the Dallas police statement to WFAA, “officers conducted an additional search in a national police database which showed that a person believed to be Williams also had a prior felony conviction. Therefore, he was charged with Unlawful Possession of a Firearm by a Felon.”

According to Dallas police arrest warrant, Williams was “positively identified” through the driver’s license he provided police. The warrant said an officer entered his name in a national law enforcement database and found a 2009 conviction in Harris County for drug possession.

Williams said that he remembers when he appeared before the jail magistrate, she told him he was being charged with being a felon in possession of a firearm, which is punishable by up to 10 years in prison.

Williams said he tried to tell Dallas County jailers that it was a mistake. He said he felt like they thought he was crazy.

“No criminals are doing that,” he said, referring to his demand at the time to have his fingerprints checked. “If it was really me, it’d be no way I’d be telling them to do that.”

Because it was a Dallas police arrest, it was up to them to make sure their arrestee was correctly identified with the proper criminal history.

Prosecutors said they relied on Dallas police to correctly identify the person they arrested.

Dallas police sent the case over to the district attorney's office without it being looked over by a detective. There are certain types of offenses, such as DWIs and others, that the department files directly with prosecutors without it being assigned to a detective to actually investigate.

Williams was released on bail. A grand jury indicted him nine months after the arrest.

“I don't know how it got past the grand jury,” he said. “I just couldn't understand that.”

Up to this point, the case had been on autopilot in the criminal justice system – until it landed on Dallas County prosecutor Thelma Anderson’s desk. She told WFAA that Williams’ attorney bluntly told her that his client was not a felon and that there had been a mix-up.

Anderson told WFAA that she had a relative who was wrongfully accused of a crime, so she took a special interest in the case.

Anderson requested the fingerprints of the person who was convicted in the Harris County case. She then asked the DA’s fingerprint expert Darrell Doty to compare those prints with the Dallas County Williams.

“Even when I was fingerprinting this guy, he was adamant, ‘I've never been arrested before,’” Doty recalled.

When Doty compared the local Williams’ fingerprints to the prints on file in Houston, he could tell immediately it was not the same person.

“I knew that this guy shouldn't have been charged with unlawful possession of a firearm by a felon,” Doty said.

Prosecutors dismissed the charge in September.

“Being in the seat that I'm in, we have a lot of power and that power can change someone's life,” Anderson said. “The right thing to do in this case was dismiss with no hesitation... It shouldn’t have gotten mixed up, but it did.”

Still on his record

If someone looks Darrick Williams up on the county courts website, the case still shows he was indicted on a felony charge. A document in the court file says the case was being “dismissed in the interest of justice” but does not explain why.

Williams told WFAA that he is fearful every time he gets behind the wheel.

Credit: WFAA
Darrick Williams says he's afraid to drive for fear of being pulled over and mistaken for a criminal.

He worries about being stopped by the police and being mistaken, again, for someone with a serious criminal history.

“I'm still riding around with it right now, with it not expunged,” he said last month. “If I see a police car to the left, I’m turning right.”

WFAA reached out to the district attorney’s office to see what they could do to help Williams.

This past Thursday, a nervous Darrick Williams returned to the county criminal courthouse. Once there, he met with District Attorney John Creuzot, who presented him a letter he’d signed stating that the case that had been filed against him was “invalid.”

“Our office intends to provide Mr. Williams with any available assistance to correct this unfortunate misidentification,” the letter said.

Creuzot said Williams can carry the letter with him and present it to law enforcement if needed.

Creuzot also told Williams his office is taking the unusual step of helping expunge his record for free. Expunction fees can be hundreds of dollars.

“It’s not him, so we want to get that off of him,” Creuzot said. “We’re sorry about all this.”

Williams thanked Creuzot for his help.

Afterward, he said he felt better now knowing that he had that letter in hand. It also felt good knowing that someone cared about the trouble all this had caused him.

“This paper did make me feel better. It really did,” he said.

But even once the charge is expunged, he said will be left with the realization that a careless mistake can change a person’s life in an instant.

“This could happen to anybody,” he said.