"We don't condone the use of these divisive images and are addressing the issue to prevent this from happening again," Wylie ISD said in a statement to WFAA. 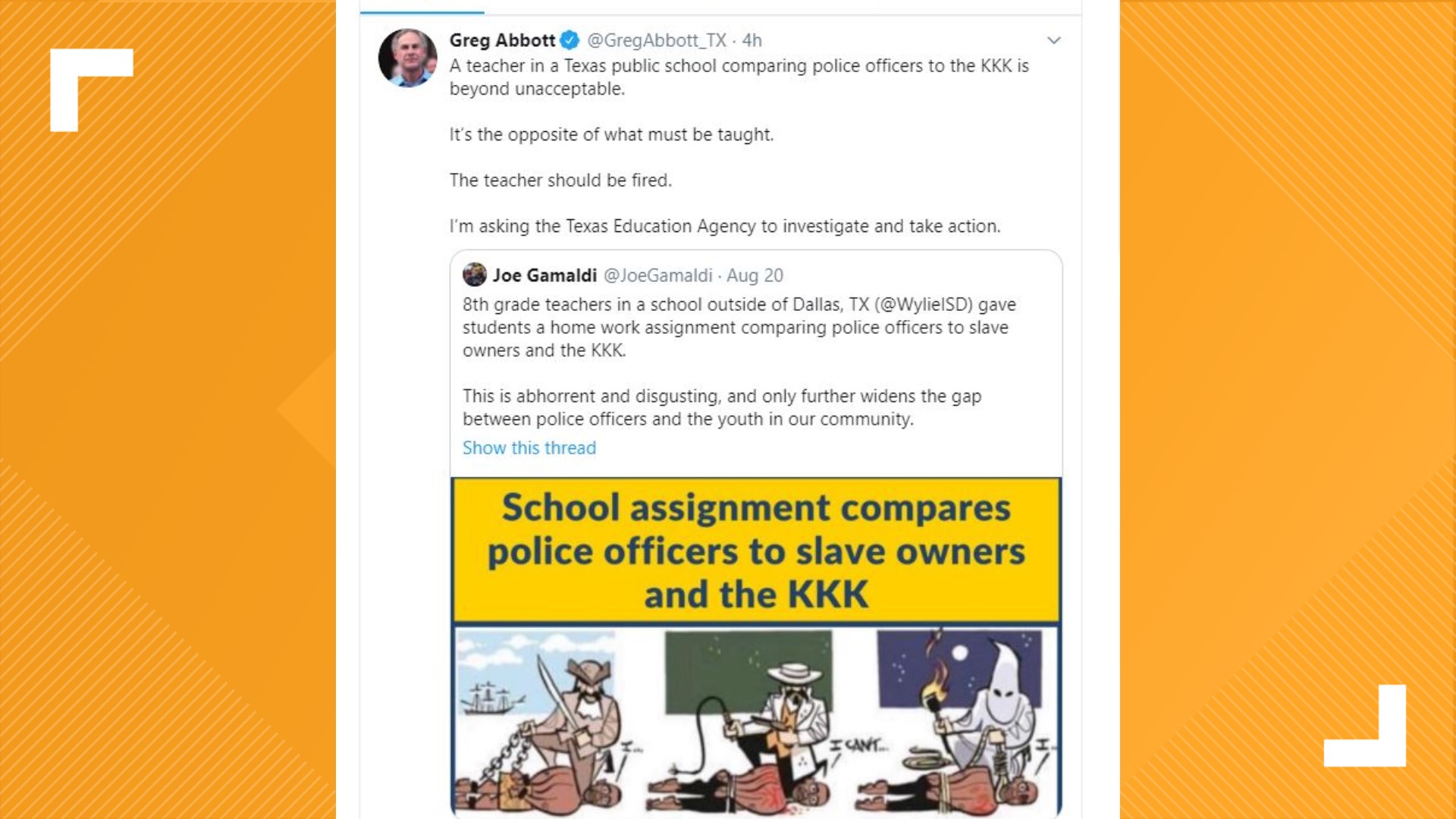 WYLIE, Texas — Gov. Greg Abbott, responding to a tweet shared by the national vice president for the Fraternal Order of Police, has called for a Wylie junior high school teacher to be fired for using a controversial political cartoon in an online course.

Joe Gamaldi, FOP vice president in Houston, shared the cartoon in a tweet. Created by David Fitzsimmons of the Arizona Star in Tucson, Ariz., it shows, in succession, a slave trader, a slave owner, a hooded Ku Klux Klan member, a 1950s-era police officer, and then a present-day police officer - each with their knee on the neck of a black man. Calling it "abhorrent and disgusting," Gamaldi said it only "widens the gap between police officers and the youth in our community."

In re-tweeting the image Governor Abbott said "comparing police officers to the KKK is beyond unacceptable. It's the opposite of what must be taught. The teacher should be fired. I'm asking the Texas Education Agency to investigate and take action."

One Wylie ISD parent said the controversy was taken out of context.

Parent Alisha Whitfield, whose son was among the 8th graders at Cooper Junior High who were given the online assignment, explained that the essay assignment, using three different cartoons previously published in newspapers and online publications, was designed to start a conversation about the Bill of Rights, protests, democracy and freedom of speech.

The essay question, provided to WFAA, also using a cartoon where a man protesting COVID-19 restrictions yells "I don't have to wear a mask. I am a free American I can do what I want," asks students four questions:

In an email to parents, Cooper Junior High School Principal Shawn J. Miller said "The purpose of the assignment was to allow our students to examine the Bill of Rights and to determine if the rights detailed in the document are still as important or impactful today. The teachers wanted to provide the students with current events to analyze the Bill of Rights."

Miller also wrote that "we also want to reassure you that we hold law enforcement personnel in the highest regard, and we did not intend to communicate otherwise."

Whitfield said she supported police, too.

"I think it's important too for me to state that we very much support the police," added Whitfield. "I actually was pleased that the teacher made the lesson so relevant to what the students have been experiencing right now, current events," she said. "And as parents, it's helped us to help [my son] better understand what the current events are."

But after Abbott shared his opinion of one of the cartoons used in the study lesson, Wylie ISD sent WFAA this statement:

"We understand the Governor's concern about the use of the unapproved political cartoon in teaching a junior high social studies lesson. We don't condone the use of these divisive images and are addressing the issue to prevent this from happening again.  Wylie ISD will comply with the Governor and the Texas Education Agency to investigate this matter as we work together to rebuild trust in the community."

In the original email to parents, dated August 20th, Miller assured parents that the political cartoon was not part of Wylie ISD curriculum and that a team of teachers decided to include it, but that the assignment did align with the Texas Essential Knowledge and Skills requirements.

The assignment was part of Celebrate Freedom Week, a period where Texas schools study the Declaration of Independence and the U.S. Constitution to highlight "the values and ideals on which the United States was founded as well as the sacrifices that were made for freedom in the founding of the country."