Judge Peter Cahill ruled against a delay or change of venue, and announced an important decision about allowing evidence from a 2019 arrest of George Floyd. 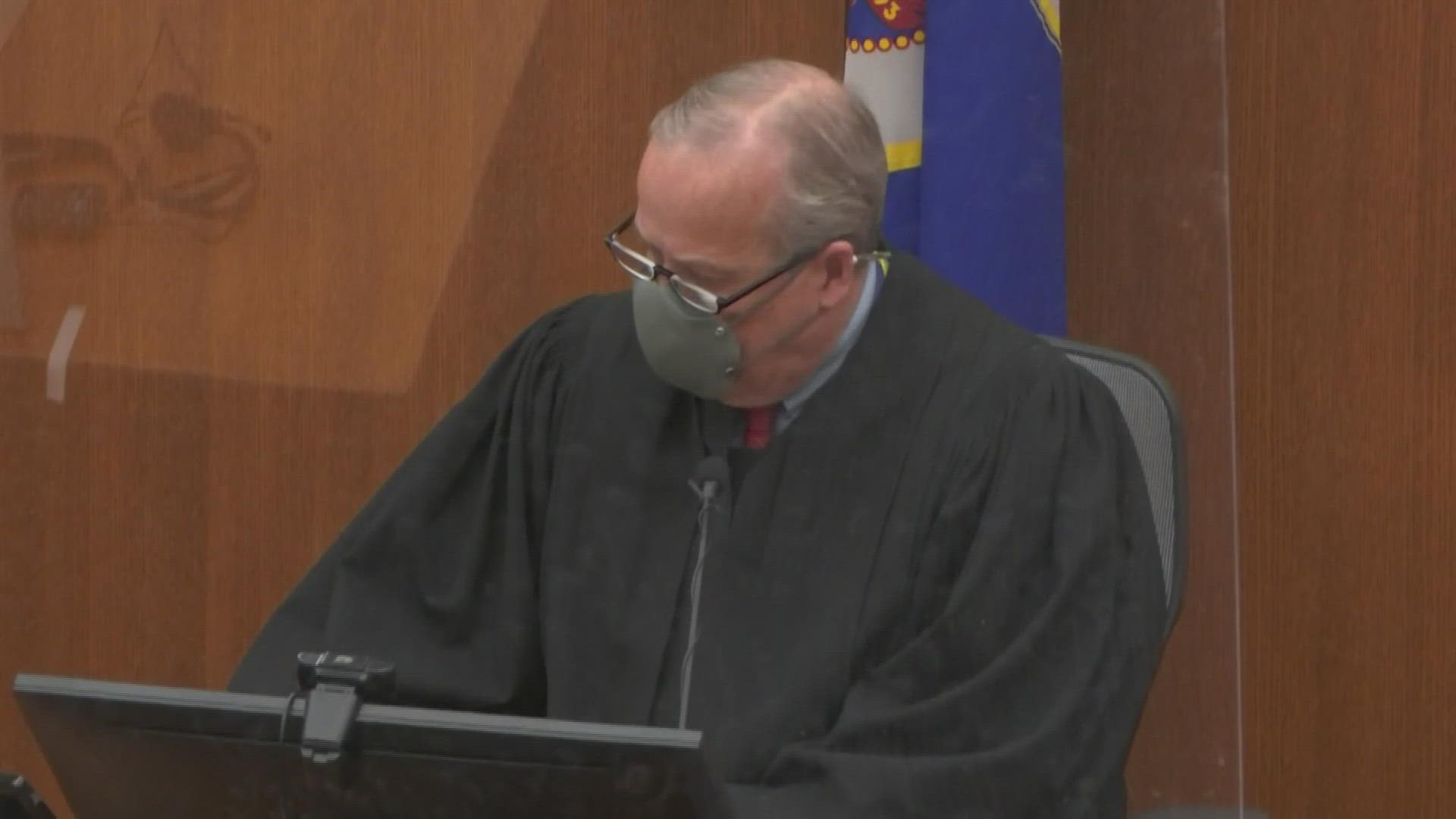 Jury selection will continue into another week, with one seat remaining to be filled on the panel of 12 jurors and two alternates in the trial of former Minneapolis police officer Derek Chauvin, charged in the May 2020 death of George Floyd.

At the close of court, Judge Cahill said the court would try to find two additional jurors on Monday.

KARE 11 News has confirmed through sources that the reason for that is in case they lose a juror for some unforeseen reason prior to opening statements beginning March 29.

It is unclear whether that 15th juror would remain on the panel or be dismissed if not needed. It is also unclear whether jury selection would extend into Tuesday if a 15th person is not seated on Monday.

Friday began with 12 jurors seated, and shortly before lunch recess a 13th was selected. Juror #96 is a white woman described as being in her 50's, who likes animals, being outdoors and says she has a passion for the issue of homelessness and fair housing.

The most pressing ruling was that Chauvin's trial will not be delayed or moved to another venue.

"I don't think there's any place in Minnesota that has not been subjected to extreme amounts of publicity in this case," Cahill stated, noting that he believes even jurors who have been exposed to news of the incident can be fair.

Chauvin's attorney Eric Nelson requested that the trial be delayed or moved after the city of Minneapolis announced it had unanimously approved a $27 million settlement with Floyd’s family.

Nelson called the timing of the announcement deeply disturbing and unfair, and said it jeopardized Chauvin’s chance for a fair trial. On Friday Judge Cahill called the timing “unfortunate” but declined to delay the trial.

Another major ruling involves admission of evidence and testimony in the May 6, 2019 arrest of George Floyd, an interaction that is very similar to the one on May 25, 2020 that led to Floyd's death.

Cahill ruled that officer body cam video from the 2019 incident will be allowed from the time an officer approached the vehicle with a gun drawn to the time Floyd was out of the vehicle and handcuffed. He also said photos from 2019 of pills in the back seat of a squad car will be admitted, saying drug ingestion could have combined with a heart condition to play a role in Floyd's 2020 death.

Cahill will allow:
A portion of videotape from one officer from start until Floyd is out of car and handcuffed.

Photo of pills in crack of seat.

Cahill said the cause of Floyd's death is a major sticking point, with the defense maintaining Floyd died of drug intoxication while prosecutors say it was due to asphyxiation from Chauvin's knee on his neck.

"The cause of death is clearly an issue here," Cahill said, before noting Floyd's stressful reactions to being forced out of a vehicle at gunpoint in both incidents, and the possibility he had ingested drugs.

Another important issue Cahill addressed involves the planned prosecution use of expert witness Dr. Sarah Vinson, who was expected to testify that Floyd's reactions to the police interaction that ended in his death were consisted with claustrophobia and anxiety. Cahill said he will not allow that testimony, or let the defense suggest that Floyd was "malingering" to cover up the presence of drugs, calling it speculative.

The judge said no testimony about Floyd's emotional state can be introduced, calling it irrelevant.

“Mr. Floyd's emotional behavior is not relevant to cause of death once he’s pulled out of the squad car,” Judge Cahill opined.

Having said that -- if the defense does something in the trial that "opens the door" to allowing this testimony, Cahill could allow it.

However, if state uses Dr. Vinson -- that would open the door to defense using entire 2019 video.

KARE 11's Lou Raguse, who has been following the Chauvin proceedings since they began, believes the decision to keep the trial in Hennepin County benefits the state. He posted on Twitter, however, that the rulings on evidence and witnesses clearly are in favor of the defense, writing that prosecutors now have to "figure out how to negate the importance of the 2019 evidence or use it to their advantage."

Court concluded on Friday afternoon with no additional jurors selected for the panel. The week in court concludes with 13 of 14 jury members seated.

Jury selection will resume at 9 a.m. on Monday.

Cahill did not say why the jurors were excused. He said calls were being made to find two jurors who could make it in for afternoon questioning, if the jury isn't filled out by the end of the morning session.

Just one juror is need to fill out the Chauvin panel.

Juror #96, a white woman in her 50s who described herself in court as an animal lover who also has a passion for the issue of fair housing and ending homelessness, was the 13th person selected to hear the trial of Derek Chauvin.

During questioning juror #96 told the courtroom that the place she works (which was not specified) was damaged during the riots. She does not, however, think that fact would make her biased. She said she does not like the way MPD has handled homeless people in Minneapolis.

The trial of Derek Chauvin, a former Minneapolis police officer charged in the death of George Floyd, is scheduled to begin on March 29.

RELATED: What we know so far about the jurors in the Derek Chauvin trial

GALLERY: The Trial of Derek Chauvin

1 / 48
David Peterlinz/KARE 11
Protests outside the Hennepin County Government Center on April 19, 2021, the day of closing arguments in the Derek Chauvin trial.