The photoshoot was organized by Beyond the Ball, an organization dedicated to showing student athletes that they can be more than ballplayers. 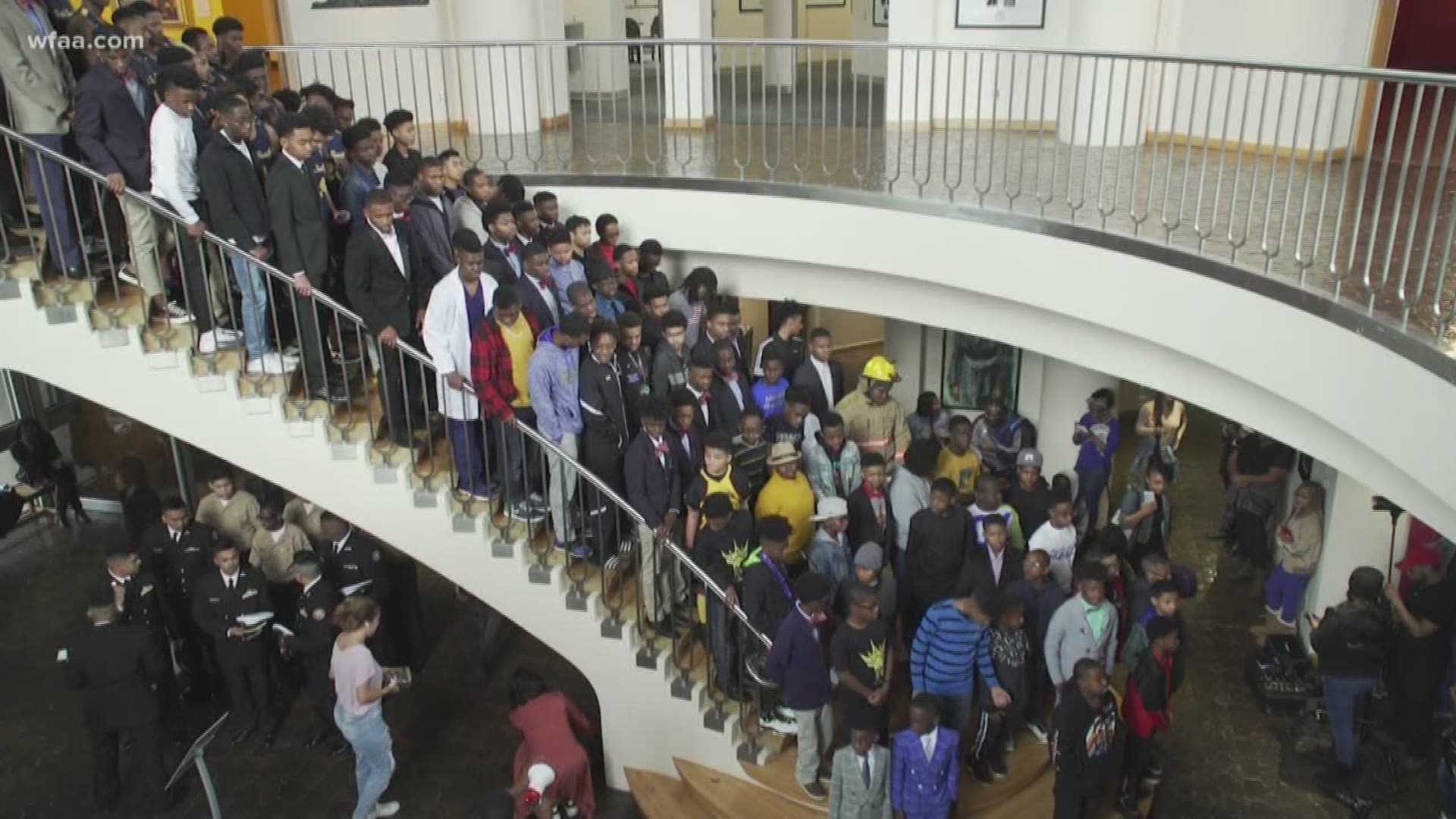 DALLAS — Photographer Kauwuane Burton moved the tall kids to the top of the long staircase and the youngest ones to the front.

“Little man, come over here,” he said, placing one of the smallest in the group front and center.

It wasn’t easy to wrangle 100 boys for the Sunday afternoon photoshoot. And Burton knows from personal experience that it isn’t easy to raise them, either —  not in a society that seems far too quick to judge.

“I’m amazed we got this many participants to show up and come out today,” he said. “It’s breathtaking.”

The photoshoot was dubbed "100 brilliant boys of color," and organized by Erica Molett, founder and chief executive officer of Beyond the Ball.

Beyond the Ball is an organization that shows student athletes that they can be more than ballplayers.

“My 13-year-old is obsessed with basketball and dreams of being the next Lebron James. It’s been important to me to make sure that our boys see themselves as more than just athletes,” Molett said.

Society sometimes sees them that way, too.

“Every week someone walks up to me and asks me if I play sports,” said 16-year-old Broderick Lowe, a student at Duncanville High School. “But, I’m into books and academics and all that stuff.”

“They expect me to be something I’m not,” Lowe said.

Lowe was one of the 100 boys chosen for the photoshoot. The boys will appear on the cover of Southern Dallas Magazine, on an edition dedicated to raising strong black boys.

Credit: WFAA
The photo shoot was at the African-American Museum at Dallas's Fair Park.

“Being a young African-American kid, it’s very hard because people try to bring you down because of your race,” said 11-year-old Elijah Rodgers.

Molett is helping kids learn how to break the stereotypes.

Molett encouraged the boys to dress in clothes emulating who they want to be when they grow up. One boy wore scrubs and a white lab coat. Another wore firefighting gear. Several had on suits.

Twelve-year-old Ladanian Hale wore his football uniform. He said people have told him he won't make it, but he ignores them because he's determined to be a professional athlete.

“But at the same time, I’m going to have a back-up plan,” he said. “My back-up plan is to be an entrepreneur. If you don’t know what that is, it means to have your own business.”

Molett focused on middle school and high school boys because that's when they start to physically mature, changing society's perception of them.

"They become less of an endeared child and more of a young man," Molett said. "And those who are ignorant in society may look at them upon first blush and assume something negative is going to happen in an interaction.”

After several minutes of moving and shifting Sunday, the photographer said he felt confident he got the perfect shot.

“This group of kids is going to go on to do great things," Molett said of them.