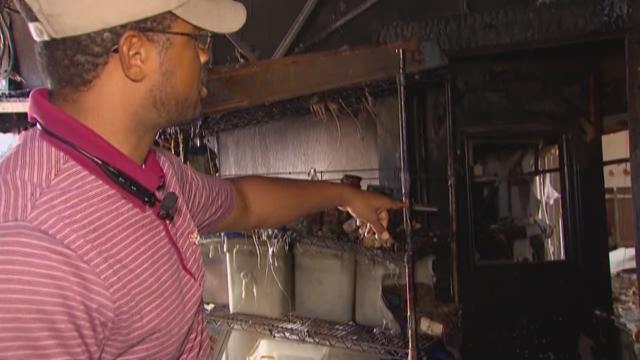 DALLAS – The State Fair of Texas is just days away from opening. As vendors make preparations to begin serving up popular foods, one restaurant returning this year will be serving its award-winning barbecue, despite facing a huge hardship.

"As you can see everything is basically destroyed," said Brent Reaves as he walked through the fire-damaged restaurant.

Smokey John’s Bar-B-Que & Home Cooking's building on W. Mockingbird Lane is thick with smoke. The kitchen is damaged. Workers at the popular family-run restaurant that has been a staple in Dallas more than 40 years say they are dumbfounded.

“All of our personal files, and papers, and office is completely destroyed," said Reaves.

The restaurant is temporarily closed. Its owners say the recent fire was accidental and started in the kitchen.

"It's pretty clear there's a lot of challenges here,” said Juan Reaves. “We're going to work through it.”

The fire is forcing staff to turn away dozens of customers daily. The Reaves say they are pushing forward with plans to offer up their award-winning barbecue, turkey legs, and fried snacks at the fair.

Juan Reaves explained, "It's an opportunity for us to do what we do, which is serve the public and serve food. And it also allows us to get all of our employees who work at the restaurant, a lot of them will be working with us at the Fair."

The Reaves’ say some local businesses and community members are stepping up, by offering Smokey John’s use of commercial kitchens and other assistance.

The team is also launching a special challenge for loyal customers and community members who are planning to visit the fair. It is called #SJitForward.

The Reaves say through the #SJitForward campaign, they are hoping to create a fire of interest in the community that encourages blessing strangers by paying it forward.

Smokey John’s staff is encouraging its customers and community members to follow the restaurant's social media accounts for updates. They expect restaurant renovations to take at least two months. The family says any photos shared from the Fair using #SJitForward may be used as part of the restaurants re-opening.