For the Lancaster High School students, it is another mission accomplished. 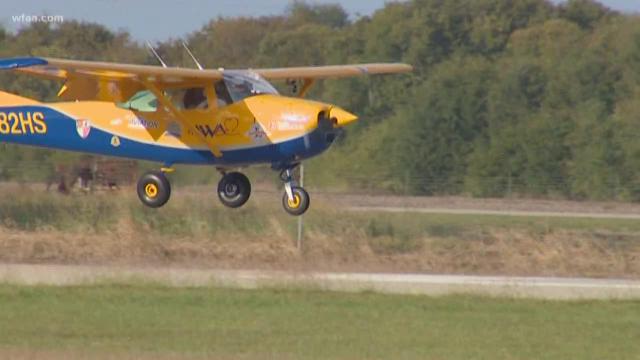 LANCASTER, Texas – While many Texas teenagers have their mind on Friday night football, one group of students was busy focusing on math and science. Some Lancaster Independent School District students were bust taking their skills from the classroom to the clouds.

“This is the part that I wanted,” said Latron Perkins as he watched a bright blue and yellow plane prepare to take off.

There was a lot of anxious excitement around Lancaster Regional Airport. Perkins and his classmate Jaqkolbi Wesley had their cameras rolling, capturing every moment.

The Lancaster High School juniors watched the plane they built take off for the very first time. Wesley and Perkins are among a large group of students who spent the last year building the Cessna 182.

Perkins said, “When I saw that plane take air, I was like, we did it! The students did it.”

The project is part of a hands-on Science, Technology, Engineering, and Math challenge. Lancaster ISD students take their skills from the classroom to the clouds with help from Captain Barrington Irving’s Experience Aviation: Operation Build and Soar program, and the non-profit Wings of Hope.

Wesley says S.T.E.M. is becoming part of his passion. "I played football, then I realized it wasn’t for me,” the teen explained. “I found something else for myself. Engineering was the outlet for me.”

Building the plane was tough, but fun. Perkins says accuracy and detail were key as he worked on the wings.

Wings of Hope will dispatch this airplane on medical missions to poor communities worldwide. The group’s President, Brett Heinrich, said the first stop is Nicaragua.

"I’m so impressed that so many people came together around one common cause. To educate our kids, to teach them to dream, and to help other people all around the world,” Heinrich said.

For the Lancaster High School students, it is another mission accomplished.

"I’m ready for it to take off and go help people,” Wesley said.

S.T.E.M. is allowing the students’ skills to soar.

This is the not the first project the Lancaster S.T.E.M. students completed with Captain Irving’s Experience Aviation program. In the past, the students also built a race car.