The collision sparked a fire which badly burned Matthew, her husband, from the knees down. 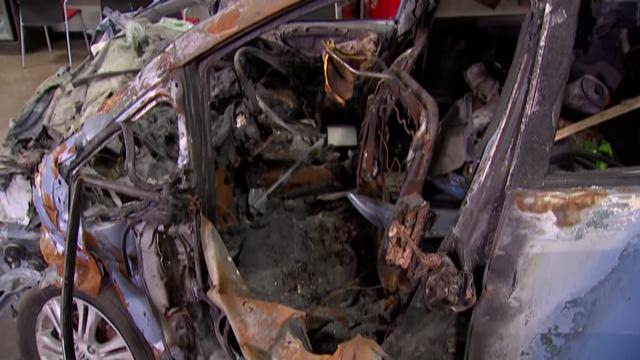 Marcia Seebachan said she cannot remember the collision that changed her life almost four years ago.

"It's surreal. Today is actually the first day I've laid eyes on the car and been around it since the wreck," said Seebachan, 33, standing in front of her charred 2010 Honda Fit.

A shred of wrapping paper is still in the trunk and a scorched tin of popcorn in the back seat are the only things she recognizes in the badly damaged car.

"It's little details, just seeing all the glass crumbled, the seat gone, and knowing that if the gentlemen who pulled us out hadn't exactly what would have happened to us,” she said.

A Toyota Tundra pick-up truck hydroplaned in December 2013 and slid into the front of the Seebachan’s small car.

The collision sparked a fire which badly burned Matthew, her husband, from the knees down.

"The roof has failed for a specific reason because roofs do not buckle like that," said Todd Tracy, plaintiff’s attorney.

The roof of their Honda is a big factor in the fire, he argues.

When the roof separated, one of the Honda’s side walls bent outward, Tracy said, eventually curving under the vehicle enough to puncture the gas tank under the driver's seat.

Why did the roof separate? It was not spot welded on like Honda requires, but rather, it was glued to the vehicle after John Eagle Collision Center replaced it due to hail damage.

But Honda's repair manual shows the roof must be welded, Tracy said. Nowhere does it say or suggest connecting the roof using any other means.

John Eagle Collision Center admitted in a deposition this month that it used an adhesive.

Who approved an adhesive rather than spot welds like the manufacturer instructs?

Boyce Willis, the body shop director at John Eagle Collision Center, said a consultant in 2012 approved using the 3M adhesive on the roof, according to the deposition. Willis also said that insurance companies dictate the repairs rather than specifications from the vehicle manufacturer.

The lead attorney representing John Eagle Collision Center has not returned messages from WFAA. But the company argued in the deposition that the roof is only a panel and not a structural component. Willis also said the industry is moving to more adhesives.

"I want to see people take responsibility for the things that they do that affect others," said Seebachan.

Marcia and Matthew bought the car as a used vehicle after the roof was glued on, in part because a CARFAX vehicle report said their 2010 Honda Fit had a clean history. There was no hail damage or structural repairs indicated on the report. That work was apparently never disclosed.

CARFAX has a fine print disclaimer which says it “depends on its sources for the accuracy and reliability of its information.” CARFAX’s “guarantee” on the report reads in part: “None of these major title problems were reported by a state Department of Motor Vehicles (DMV).”

It's uncertain why such major work was not disclosed. CARFAX did not immediately respond to an email from WFAA.

The couple also had a mechanic examine the engine after they purchased it, Marcia said. They seemingly did everything right in researching the vehicle but were never told about the new roof that was glued on.

“CARFAX is not a cure all because it relies on dealer repair shops and body shops to voluntarily disclose information. There is no fact check. As this case shows, you can't trust that a "Certified" body shop or repair facility will follow the manufacturer's specifications. Todd recommends that when a consumer gets their car repaired or body work done that they demand a written statement that all of the work meets the vehicle manufacturer repair specifications,” said Tracy.

The Seebachans settled with the driver of the Toyota Tundra and separately with Honda. But the couple is going to trial in September against John Eagle Collision. The Seebachans are seeking more than $1-million in damages for the roof repair that was never disclosed. After suffering disfiguring injuries, Matthew has had to drop out of nursing school and has been unable to work since the fiery crash in 2013, said Marcia.