Dominique Alexander, founder of the Next Generation Action Network, blamed Mayor Mike Rawlings and Dallas Police Chief David Brown for having his probation revoked and returning to the county jail. 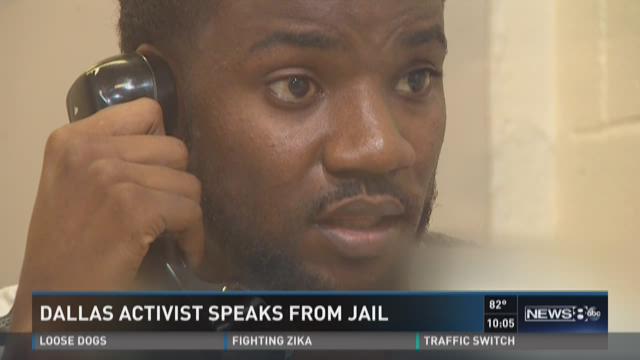 DALLAS – Dominique Alexander, founder of the Next Generation Action Network, blamed Mayor Mike Rawlings and Dallas Police Chief David Brown for having his probation revoked and returning to the county jail.

"They do not want to sit down with nobody they disagree with," Alexander said. "That's why I'm in here. They have not one time met with me to address these issues."

Alexander, who's kept separately from other inmates, is asking to be put in to general population, the sheriff’s office said.

During an interview with WFAA, Alexander asked that he not be shown wearing a jail jumpsuit.

"I have an older daughter who's seven years old and I don't want her to be harassed at school," he explained.

For several years, Alexander has organized protests against police brutality on downtown streets.

But he returned to jail last week, for a 2009 criminal charge that he pleaded guilty to shaking his girlfriend’s baby.

A court gave him 10 years of probation.

"I didn't violently shake a child,” he said. “All I said, I picked up the child to see if he was alert. You get what I'm saying? In the process I'm shaking, I'm not violently shaking. There were no bruises on this baby.”

A judge just revoked that probation after Alexander took two trips out of state – one to the Democratic National Convention in Philadelphia and the other to Baton Rouge to protest the deadly police shooting of Alton Sterling.

"I hadn't done anything new. Nothing," Alexander said.

"You just can't jump out there and make it look like you just want to be seen," said the Rev. Ronald Wright, executive director of Justice Seekers Texas, LLC.

After the massacre of the five policemen in July, Wright said Alexander should have elevated his advocacy to prosecutors and black elected officials.

While locked up, Alexander was asked whether his organization would host any more protests

"I'm not the decision maker," he said.

The Next Generation Action Network has other members in charge, Alexander said, in his absence.

"I do know there are a lot of efforts to continue to strive for justice,” he added.

Alexander said he expects to finish his sentence by the end of the year and said once released he plans to pick up where he left off with Mayor Rawlings and Chief Brown.