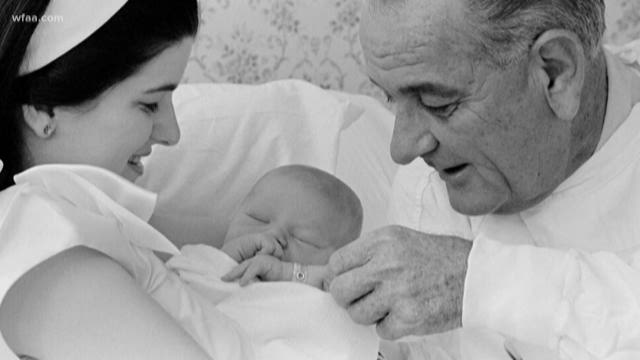 DALLAS – Almost 54 years after Lyndon B. Johnson took the oath of office in a crowded stateroom aboard Air Force One on the ramp at the airport, the city finally plans to recognize the historic transfer of power inside the terminal.

"Usually the transfer of power happens on the Capitol steps in Washington during the inauguration. There's a couple of exceptions. This is one of them,” said Lyndon Nugent, LBJ’s grandson, in an interview with WFAA.

Nugent is President Johnson's first grandchild. Images from the LBJ Library show Nugent as a toddler flying on Air Force One with his grandfather, visiting the Oval Office with him, and playing in the swimming pool at LBJ Ranch with the president.

"Regrettably, I was not quite six when he passed away. I would have liked to have gotten to know him a little bit better,” Nugent added.

Just above the TSA security checkpoint, on the second-floor landing at Love Field, architects designed a large bay window for travelers to peer out where Air Force One was parked on that November day in 1963.

The public also cannot see the bronze marker, donated by JFK historian Farris Rookstool, III, on the spot where the oath was given.

A runway light, flush in the ground next to the marker, was supposed to shine into the bay window showing the public the location of the event. A week after it was illuminated in 2015, the airport abruptly turned it off.

"It's so unique. It happened at such a tumultuous time in our country's history that I think there's a big lesson the City of Dallas could share with all its visitors, I just kind of wonder why it's missing out on an opportunity,” added Nugent. "I'm a person who's always interested in history."

Outside, motorists even speed past a state historical marker in front of flag poles along the busy entrance to the airport.

The airport just celebrated its centennial, construction inside the new terminal is complete, so why hasn't the city made progress in recognizing the unique transfer of power that happened here?

For the first time, Dallas’ Director of Aviation, Mark Duebner, agreed to share what's happening behind the scenes to bring history inside.

"The wheels have turned slowly, and we hope to rectify that soon,” said Duebner. "This was a significant event. I think it's important for us to recognize it. We want to do it in a way that's tasteful and appropriate but first, and foremost we are a busy, active airport and that's our primary purpose."

The city already spent $4,000 to etch Air Force One on glass. That now stands in one of the bay windows.

Large metal pins are also in the wall next to it where an informational panel will hang by the end of the year, said Duebner. He explained that it will also recognize former state Rep. Dan Branch and Corgan Associates, among others, in their initial effort to recognize the event and locate where Air Force One was parked at the airport that day.

"Explaining that the aircraft was parked on our ramp here at Love Field while the ceremony was held inside Air Force One, I think that's the most important thing for people to take away,” said Duebner.

Once construction on the airfield is complete in the next 12-14 months, travelers can also look for the light to be illuminated again, he added.

"I think in some way or another, we'll find a way to have the light on. The intensity is an issue. We have to work with our pilots and our tenants to make sure everyone knows what the light means,” Duebner explained.

"This is the epitome of how our government transfers hands. It just happened at a very, very, unique place,” said Nugent.

If anything went right that day in 1963, the transfer of power was it. The act upheld the constitution.

Fifty-four years later, the swearing-in remains a rare scene outside D.C., one in which Dallas finally appears close to recognizing.