The grounds were closed to the public Wednesday after supporters of President Trump stormed the U.S. Capitol, forcing evacuations. 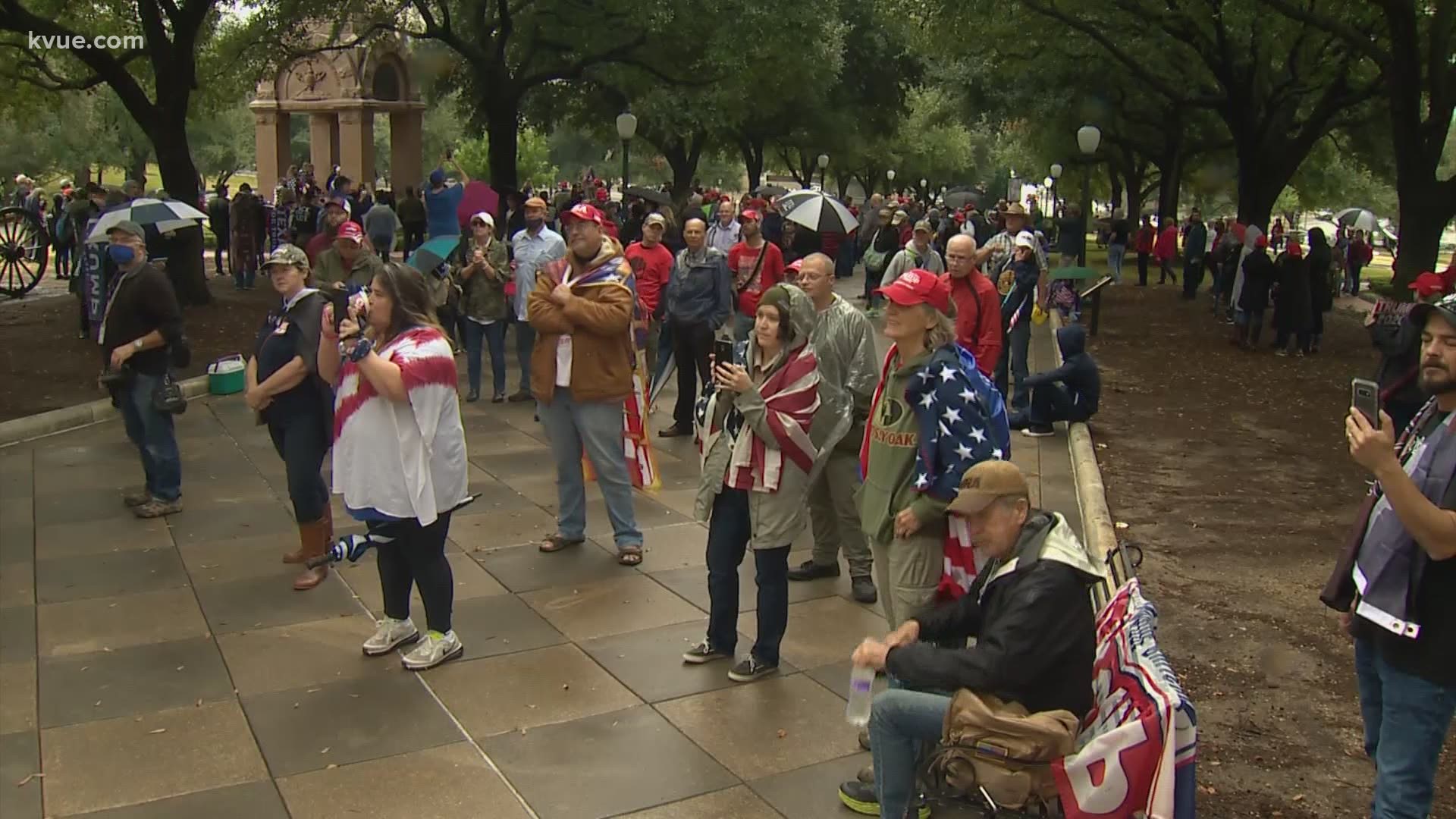 The Texas Capitol reopened on Thursday at 9 a.m., DPS confirmed to KVUE. A spokesperson with the State Preservation Board told KVUE the Capitol grounds hours were 7 a.m. to 7 p.m.

People from around the country converged in Washington, D.C., to protest the election results at a "March For Trump" rally, which escalated into violence and chaos on Wednesday afternoon. The U.S. Capitol building was placed on lockdown after rioters stormed the grounds, prompting messages of rebuke from lawmakers and the president himself.

In Austin, protesters unable to make it to D.C. gathered at the Texas State Capitol on Wednesday, Jan. 6.

On a Facebook event titled, "Occupy The Capitol for Trump - Austin," hundreds of people expressed interest or said they were going. The event started at 12 p.m., but the event creator said "some groups are recommending that we arrive by 7 a.m ... We may change the start time to 10ish." Protesters met at the south steps of the Texas State Capitol.

"If you aren’t able to make the trip to Washington, D.C., please join us as we gather on the steps of the Capitol building in Austin, Trump has asked for all Patriots to show up in support of fair elections so let’s do it!!!" the event description read.

Hundreds could be seen on the south steps and outside the Capitol grounds on Wednesday.

KVUE spoke to several people who drove to Austin from places like Houston, Dallas-Fort Worth and San Antonio.

“We feel like this is a bit of a historical moment to be in and around it," said R.J. Dobbins, who was visiting from Houston. “Well, you know what, things happen for a reason. The truth will prevail ultimately even if Trump does not end up pulling this out."

Dobbins' friend, Chandra Ranne, who is also from Houston, said she believes good will come out of this.

"I believe that any evil that prevails will be judged, and so there’s blessings on the other side of this. We just have to persist and have to stay fervent in prayer," Ranne said. “We’re very grateful to be a part of this and we’re excited that we live in a country where we can be free, we can pray with people in public and we still have our rights in place."

The Austin Police Department told KVUE that the local crowd had been "calm and peaceful," and APD was not assisting but officers were available as needed. As of around 3:15 p.m., APD said the crowd at the Texas Capitol was starting to dissipate. Texas Department of Public Safety said the Texas Capitol would close out of an abundance of caution.

"Effective immediately, the Texas State Capitol building and grounds will be closing to the public out of an abundance of caution," a statement read. "While we do not discuss operational details, DPS will continue to adjust our operations as needed to maintain public order and address potential threats."

By midday in D.C., large crowds of pro-Trump protesters marched to the U.S. Capitol and breached police barricades, making their way into the building, outside Senate chambers.

The Capitol was placed on lockdown, police ordered evacuations of several buildings and the certification of Electoral College votes was delayed.

In response to the riots, Trump tweeted, "Please support our Capitol Police and Law Enforcement. They are truly on the side of our Country. Stay peaceful!"

After the events in Washington on Wednesday, the Texas Attorney General's Office called on protesters in Austin to remain peaceful.

"I call on protesters in our state and our nation’s Capital to practice their constitutional right in a peaceful manner," said Texas Attorney General Ken Paxton. "I stand for election integrity and the democratic process. I will not tolerate violence and civil disorder."

I call on protesters in our state and our nation’s Capital to practice their constitutional right in a peaceful manner.

I stand for election integrity and the democratic process. I will not tolerate violence and civil disorder.

In addition to the election results, the event organizer also mentioned Austin leaders' reaction to the ongoing COVID-19 situation, saying, "The Fascists in DC and now in Austin are threatening to CLOSE the City."

At a briefing Tuesday, Austin's top doctor said he expects the Austin area to exceed its 200 ICU hospital bed capacity before Jan. 15.

"The entire state is in a state of emergency. And this indicates that we need to have a substantial change in policy to more aggressively mitigate the risk of spread, because what we’re doing now is not working," said Dr. Mark Escott.

President Trump spoke at the D.C. rally on Wednesday morning. Attendees rallying on Wednesday said they were aiming "to demand transparency and protect election integrity" on the same day Congress is set to officially approve the 2020 election results. This event comes after President Trump warned via Twitter that there would be a "very big" and "wild" protest on Jan. 6 after he refuses to concede due to unfounded allegations of election fraud.

How to get the COVID-19 vaccine in Texas

Allergy Alert: Cedar pollen count is at the highest this season so far

1 killed, another hospitalized after police shooting in Austin