'A Texas legend': Reactions to the death of H. Ross Perot

Reaction to the death of H. Ross Perot, a Texas billionaire and two-time presidential candidate. 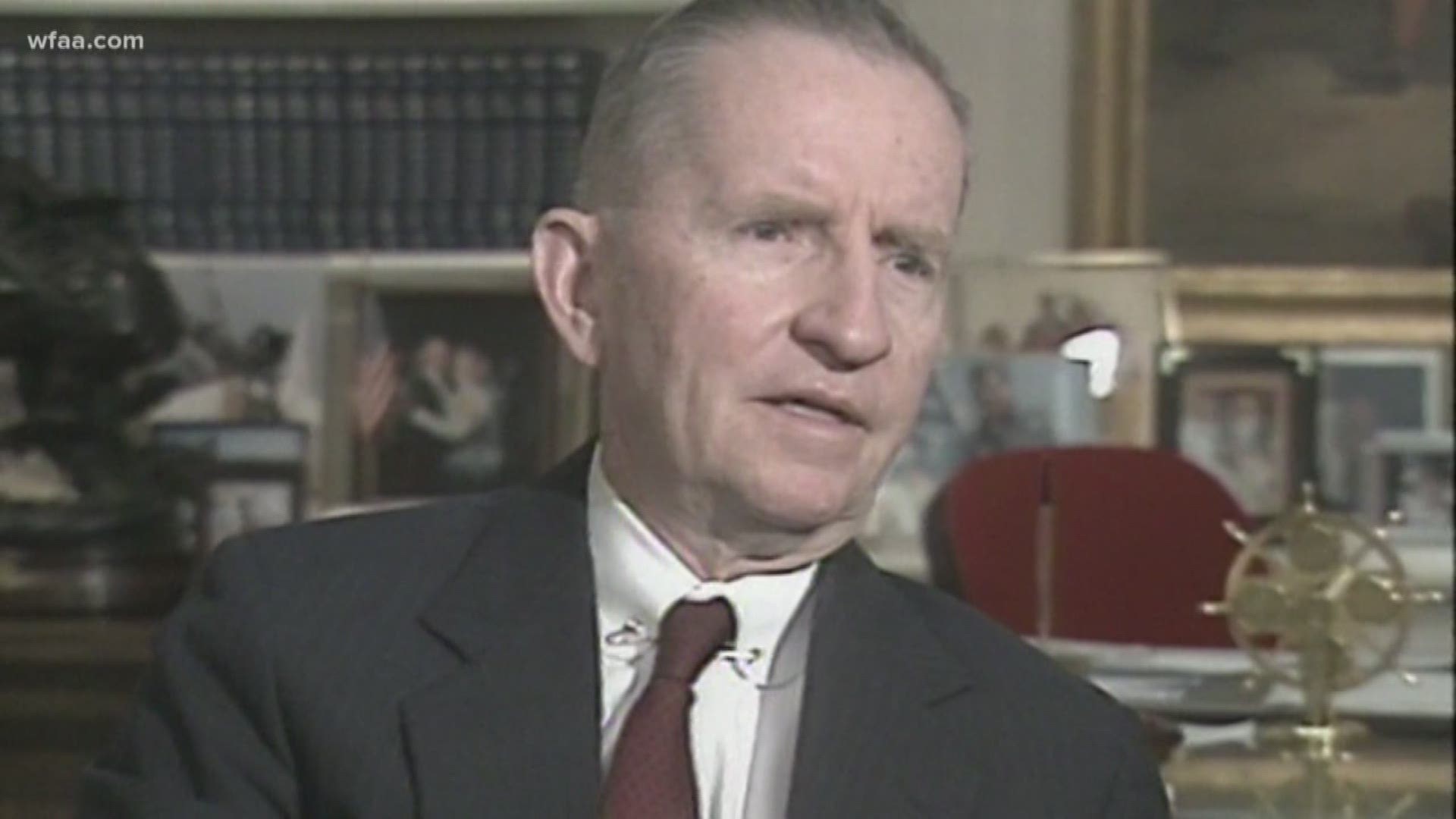 Less than two weeks after he turned 89, a "Texas legend" has died.

H. Ross Perot was born in 1930 in Texarkana, Texas. He became a billionaire in Texas and ran for president twice while living in the state. Tuesday, he died at his Dallas home.

Not surprisingly, a large number of reactions to his death came from Texas leaders.

Here are some of those reactions:

“Texas and America have lost a strong patriot. Ross Perot epitomized the entrepreneurial spirit and the American creed. He gave selflessly of his time and resources to help others in our community, across our country, and around the world. He loved the U.S. military and supported our service members and veterans," Bush said. "Most importantly, he loved his dear wife, children, and grandchildren.  Laura and I send our heartfelt condolences to the entire Perot family as they celebrate a full life."

“Ross Perot exemplified what it means to be a Texan and an American. Born into extreme poverty, he rose up to become one our nation’s most successful entrepreneurs and an exemplar of the American dream. More importantly, however, Ross Perot was a devoted husband, family man, and servant of God. His charitable work and his support of the United States Military and its veterans will forever be remembered. I ask that all Texans join Cecilia and me in remembering one of the Lone Star State’s greatest sons and keep him and his family in their prayers.”

"Jan and I extend our deepest condolences to the Perot family. Ross Perot, Sr. was a great Texan, a great patriot, a legendary entrepreneur and a friend. He was a man of faith and a U.S. Navy veteran whose life exemplified the American dream. His grit, his ingenuity and his fearless and courageous spirit will inspire Texans and all Americans for generations to come."

“Our hearts are heavy as we bid farewell to Ross Perot. In his 89 years on earth, he lived the American dream to the fullest. Ross is a Texas legend. He will be remembered as an outstanding entrepreneur, philanthropist, and dedicated husband and father. A fierce patriot, Ross fought for what he believed in, and his national grassroots movement changed politics forever. Heidi and I send our heartfelt prayers and condolences to his wife Margot and the entire Perot family as they grieve the loss of a loving husband, father, and grandfather. May he rest in peace.”

“We have lost a true Dallas icon. Ross Perot was a veteran, successful businessman, and philanthropist who spent his life working hard to make our city, state, and country better. He personified the American dream and will be sorely missed. Our thoughts and prayers are with his family during this difficult time.”

“I am deeply saddened by the loss of Ross Perot, Sr., a visionary who left his mark on our state and nation. Mr. Perot was a trailblazer who saw Fort Worth’s potential and invested heavily in our city through numerous economic development endeavors. Above all, Mr. Perot was a patriot who selflessly served our country in many capacities. Mr. Perot will be missed, but his legacy will continue to positively impact Fort Worth and change lives for the better. We extend our condolences to the entire Perot family as they mourn the loss of an incredible husband, father and grandfather.”

“Ross Perot was an incredible individual, patriot, entrepreneur and visionary business leader. He was underestimated much of his life and leaves behind a larger than life legacy. He epitomizes all that is great about America. Humble beginnings and a great work ethic are stepping stones to incredible success.”

"With the city and the nation, we at the Perot Museum of Nature and Science mourn the passing of Ross Perot, a Texas giant, just as we celebrate his life among us.

Mr. Perot was an engineer at heart.  He saw in this Museum a way to make STEM education accessible and appealing to children at the critical period when capturing their imagination and confidence establishes their trajectory into science and technology. He wanted for this city and state an educated, innovative workforce and saw the Perot Museum of Nature and Science as one expression of that. For that, we remain grateful.

Mr. Perot enlivened the Museum with his generous and caring spirit and served as an example of kindness, compassion, and innovation. His legacy as leader, independent thinker, technological trailblazer and American patriot will endure and continue to serve as inspiration in fulfilling our mission.  Our heartfelt thoughts are with the entire Perot family at this time."

"H. Ross Perot had a special place in his heart for The Salvation Army since childhood. Over and over while growing up, he heard the story about how the brother he never knew, Gabriel Ross Perot Jr. – who died of spinal meningitis before Ross was born – would pass a tambourine through the crowd in downtown Texarkana on Saturday nights to collect donations for The Salvation Army.

Everyone from the farms and rural areas around Texarkana would come to town on Saturdays to meet and stock up on supplies. Gathering around town square on Saturday nights was a big part of life for the Perot family in those days.

'The story we all heard about through our childhood was when The Salvation Army band would come down and play,' Perot said. 'They would give him the tambourine at the end of the concert and he would pass the tambourine. It was the high point of the Saturday night.'

In addition to his lifelong fondness for The Salvation Army stemming from these childhood memories, Perot had another reason to support the organization: His wife Margot was a member of The Salvation Army’s local advisory board and a Life Member of the National Advisory Board.

Perot also gave the lead gift to a capital campaign for The Salvation Army in Texarkana to build the Gabriel Ross Perot Center of Hope transitional housing shelter.

Through the years, Ross and Margot’s children have also become supporters of The Salvation Army. Last holiday season, Ross Perot, Jr. and his wife Sarah matched every dollar donated to The Salvation Army red kettles across DFW up to $500,000 during the home stretch of the annual campaign. And two years ago, they gave $1 million to support local services of The Salvation Army of North Texas following a $1 million gift from Ross, Margot, and their daughters for Hurricane Harvey relief.

'There’s just such a wonderful work that goes on, and so many varieties of work, reaching so many people,' Margot said.

The Salvation Army is honored to have had the admiration and support of H. Ross Perot during his entire lifetime. We extend our sincerest condolences to his family, friends, and all who loved him.